Good morning, and welcome to another Friday. Before we get into the forecast, I wanted to bring your attention to an event that was held yesterday at Rice University. “Flooding, water reuse and resource recovery: Trends and opportunities” was held at the Baker Institute at Rice. They were planning to discuss water use issues initially. But post-Harvey, they put together a good panel including Jeff Lindner, Harris County’s Flood Control meteorologist to discuss Harvey and some of the issues around flooding. I encourage you to watch the presentations, which can be accessed from the event web page. After the three presentations, there was a Q&A period. This is one of many conversations that will need to continue in the wake of Harvey.

One other quick note. I’ll have a long post later this morning that will recap the incredible tornado outbreak that accompanied Hurricane Harvey here in the Houston area. So far, the National Weather Service has confirmed 29 tornadoes in the Houston area. We’ll drill into some of the bigger ones and ones we have damage pictures from. Look for that around 10 AM.

On to the forecast…

This weekend should be fairly straightforward. We should be dry once again today. We hit the low 90s on Thursday, and we’ll probably hit that or exceed it again today. Aside from the heat and humidity, it will be sunny.

For Saturday and Sunday, not a ton of change, but there will be some subtleties. Precipitable water values will edge upwards from just over an inch today and Saturday to around 1.5″ to 1.75″ on Sunday. Don’t worry, that is not abnormal for this time of year. It does mean that we should see at least a few showers and perhaps isolated thunderstorms around each afternoon, particularly on Sunday. Another don’t worry moment: The rains won’t be widespread, and they shouldn’t be too heavy either (and many areas will stay dry). But don’t be shocked or alarmed if you see some showers around this weekend.

I sincerely hope that next week is the last really nasty hot and humid summer-type week of the season, but I wouldn’t be willing to place money on that just yet. High pressure in the upper atmosphere is going to control the weather over Texas next week. That means hot, humid, and sporadic shower chances. 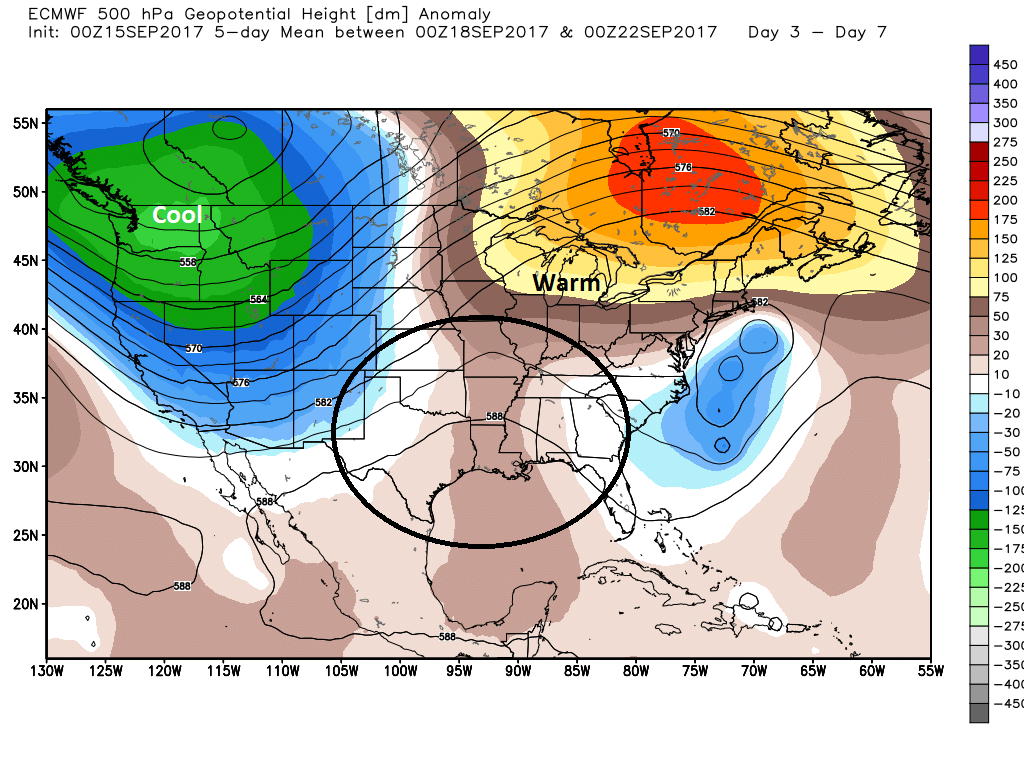 Looking at the 500 mb (20,000′ above ground) map average for next week, warm high pressure dominates the Central & Eastern U.S., but cool air lurks to the west… (Weather Bell)

You can see pretty consistent high pressure over us next week. The axis is just off to our east, so shower chances should be minor each day, but they’ll be around. I’m not expecting serious rain totals in our area though.

There will be a few things to watch heading into later next week. First, what becomes of Norma in the Pacific? I suspect that the next front or trough will stay to our west next week (you can see that on the map above too), and that should allow remnant moisture from Norma to lift into New Mexico and West Texas, far away from us. The second thing to watch, I think, will be that strong trough in the West. It could progress eastward next weekend and perhaps provide a cold front for us. The question is whether there’s enough behind it to push it through to Texas. Too soon to say. So a few things to keep tabs on next week.

We now have Jose, Invest 96L and Tropical Depression 14. First and foremost, none of these is an imminent concern at all for Texas. So you don’t need to worry about anything right now.

The track for Jose continues to shift west, little by little. Though it weakened to a tropical storm, Jose is expected to reacquire hurricane status today or tomorrow. While the center of Jose is still likely to remain out at sea, it could still very well bring winds and rough seas or beach erosion to the Mid-Atlantic and Northeast next week. There are a lot of solutions that keep Jose offshore but not by a lot. 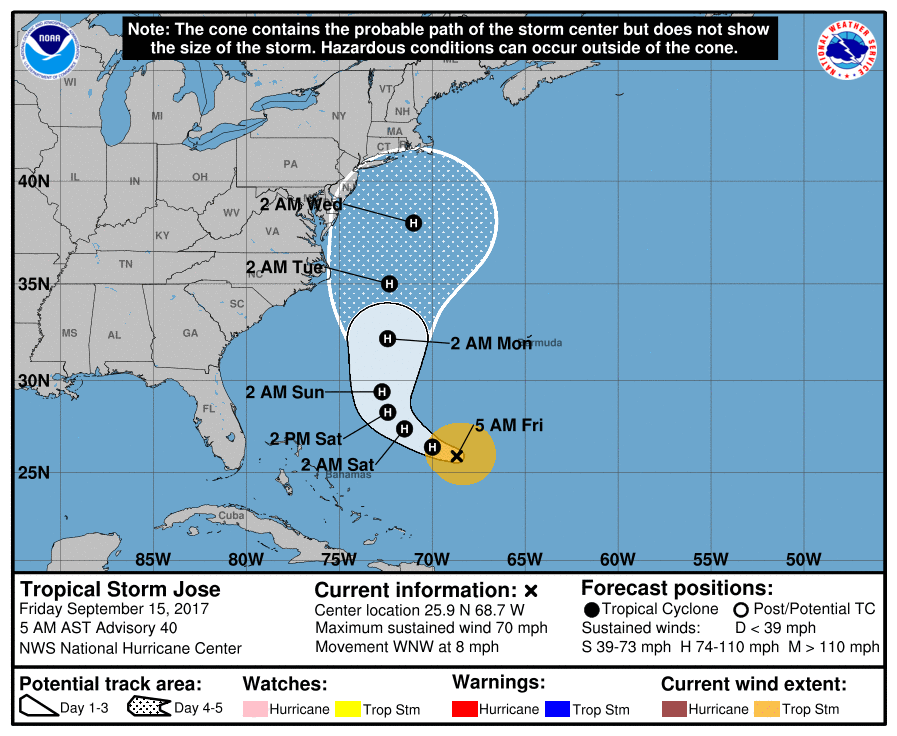 The forecast for Jose creeps gradually westward as it goes up the East Coast. (NOAA/NHC)

So the advice for folks from the Outer Banks north to New England remains the same: Keep tabs on Jose as we go into next week. There’s still a high level of uncertainty surrounding this storm.

September is typically active in the Atlantic tropics, and this year is no exception. (NOAA/NHC)

It remains disorganized and will likely struggle over the next 5-7 days as it works west toward the Caribbean. There’s not a lot of model agreement on strength or region of location of Invest 96L in 7-10 days. So again, while it isn’t something to worry about, we’ll just need to babysit this one for awhile.The tropics remain active, as they often are in mid-September.