It has been a torrid start to October, with six consecutive 90-degree days in Houston. We’ll remain in this steamy, hot, and humid pattern for only a few more days before fall’s first moderately cooler and significantly drier weather finally arrives later on Wednesday, in the wake of a front. Houston’s temperature last fell below 65 degrees on May 15th, nearly five months ago. This has been a long summer, y’all. But now it’s almost time for fall.

With lows in the mid- to upper-70s it’s incredibly warm across the region for October, and with partly sunny skies we should see high temperatures near or at 90 degrees today. Some scattered showers and thunderstorms are possible, but we shouldn’t see anything too widespread due to the lack of forcing.

Moisture levels will be higher than Monday, and as a result we expect that probably about half the region will see rain on Tuesday. Accumulations should be less than 0.5 to 0.75 inch for the most part in what will otherwise be a hot and steamy day, with high temperatures in the vicinity of 90 degrees. Increasing clouds could keep most western areas in the mid- to upper-80s. 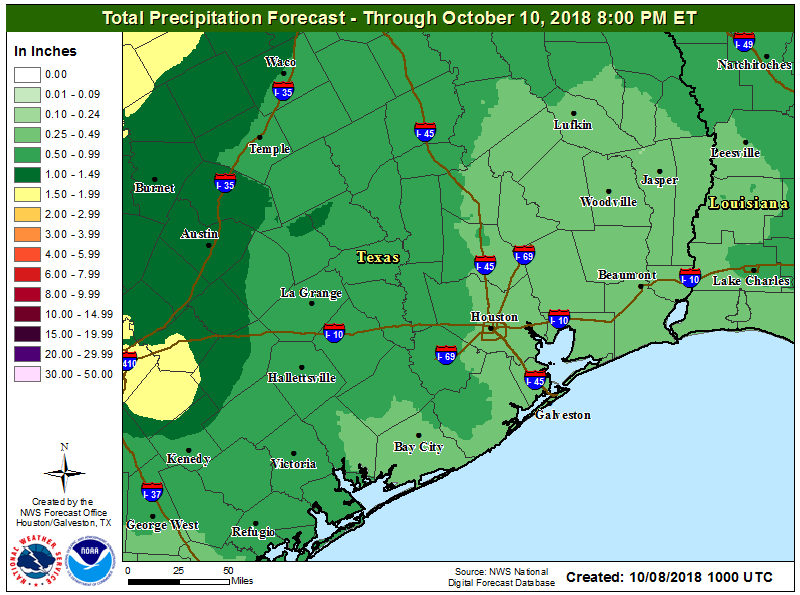 Rain accumulations for now through Wednesday should be greatest for the western half of Houston. (National Weather Service)

The first real front of fall won’t be that strong, but it will bring some drier air and overall relief to the area. This day will still be warmer, with drying air allowing temperatures to push into the upper 80s. But lows Wednesday evening should fall into the 60s for most of the region, except for immediately along the coast, and the drier air will feel immeasurably better as the sun goes down.

Nice, sunny, fall-like days with highs generally in the mid-80s and overnight lows in the 60s.

Saturday, Sunday, and next week

We expect mostly sunny skies this weekend, with a moderate chance of rain later on Saturday or Sunday as a stronger front pushes into the region late this weekend. For now, we expect partly sunny skies, with highs in the low 80s ahead of the front, and cooler weather behind it. Again, the big question is whether this is a dry passage, or whether some showers linger after the front moves through.

Either way the majority of next week looks absolutely stellar for Houston, with highs likely in the 70s and lows in the 50s. Did you want fall? Because fall is coming to you.

On Sunday, we noted the formation of Tropical Storm Michael in the Caribbean Sea, and its potential for rapid strengthening as it moved north into the Gulf of Mexico. This still seems likely, with the storm seeing ideal conditions for intensification—quite possibly to a major hurricane—before it moves into the Florida panhandle later on Wednesday or Thursday. 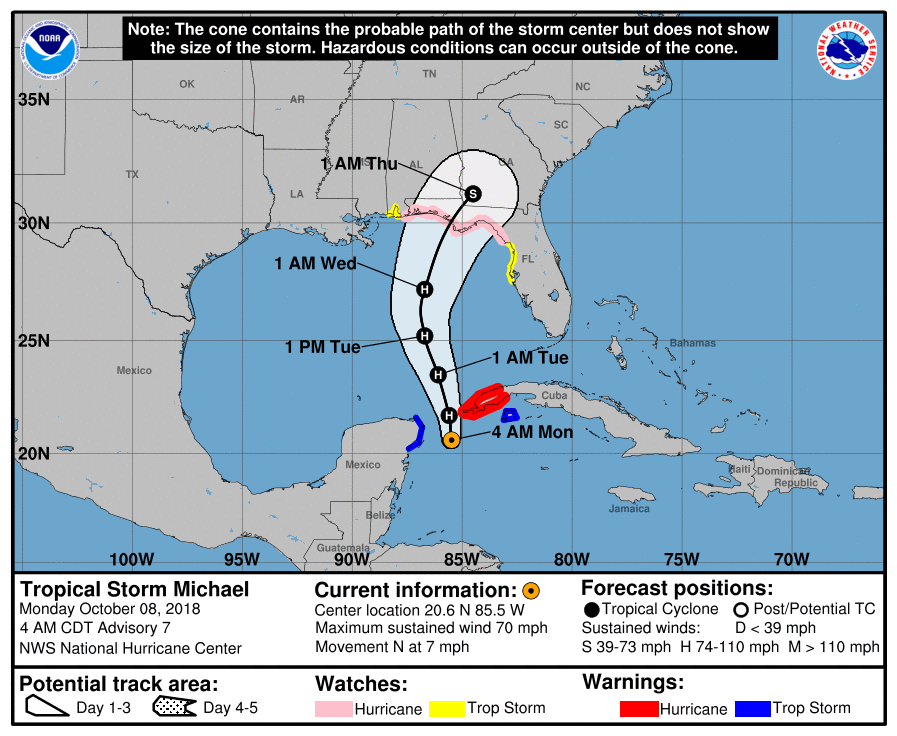 This is storm to be taken seriously by residents of Florida and Georgia along, and to the right of its path. The biggest concerns are storm surge and winds.

19 thoughts on “At long last—summer to end, fall to begin for Houston”