During Hurricane Harvey, I think we did a good job making pretty clear that our focus was to be on flooding. And ultimately, the majority of the damage and devastation wrought by Harvey as it moved through our region came via water. But one of the most surprising and occasionally unsettling aspects about Harvey’s impacts on Southeast Texas were the tornadoes. The warnings came fast, they came furious, and a number of them were confirmed.

The fine folks over at U.S. Tornadoes put together a really nice summary of this event, which likely ranks Harvey close to or in the top ten for most prolific tornado-producing tropical systems in the United States.

The Houston National Weather Service forecast office issued over 150 warnings for tornadoes through the storm. During that hellacious Saturday night and Sunday morning, over 30 tornado warnings were issued, most of them overlapping with flash flood warnings. We strongly encouraged people to keep their phone alerts on that night because the frequency of tornadoes was almost shocking (and because of numerous videos of an actual tornado in northwest Harris County late that Saturday afternoon that sort of drove home the point). That, coupled with the flooding likely lead to a long, sleepless night for many in the area. I’ll have some comments about the phone alerting issue at the end of the post.

END_OF_DOCUMENT_TOKEN_TO_BE_REPLACED

This post will provide a brief forecast for the Houston area, which really has no weather concerns at all over the next week or 10 days, and then discuss the tropics, where two other storms have developed in addition to Hurricane Irma. With 185-mph winds, Irma continues to pose a grave threat to the Caribbean Islands and southeastern United States—but the forecast is a smidgen brighter for Florida this morning. 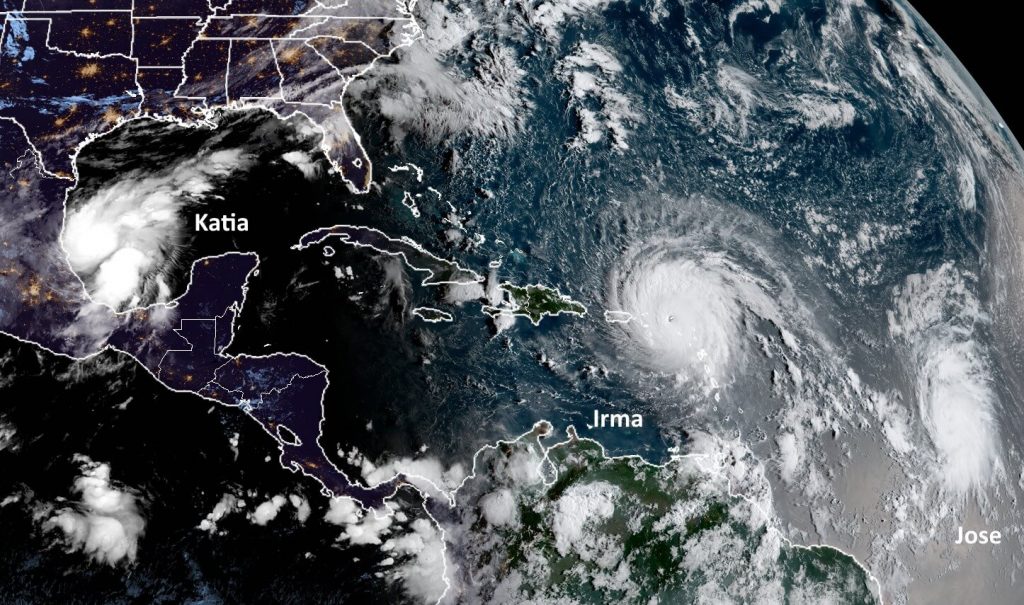 The tropics at around 6am CT Wednesday. They are … active. (NOAA)

Some isolated showers popped up earlier this morning ahead of the cool front, and a few more may develop later this morning and early afternoon as the front moves through the metro area. Nothing to be concerned about. After this we can expect amazing weather through at least Sunday or Monday—with mostly sunny skies, highs in the 80s and lows in the 60s. High temperatures may finally get back up toward 90 degrees by the middle or end of next week, but rain chances will remain near zero.

The storm’s central pressure has continued to fall this morning (another measurement of intensity) but its winds have held steady at 185mph as it approaches Puerto Rico. The eye of Irma should pass just to the north of the island today. Here’s a look at the official forecast released by the National Hurricane Center at 4am CT: 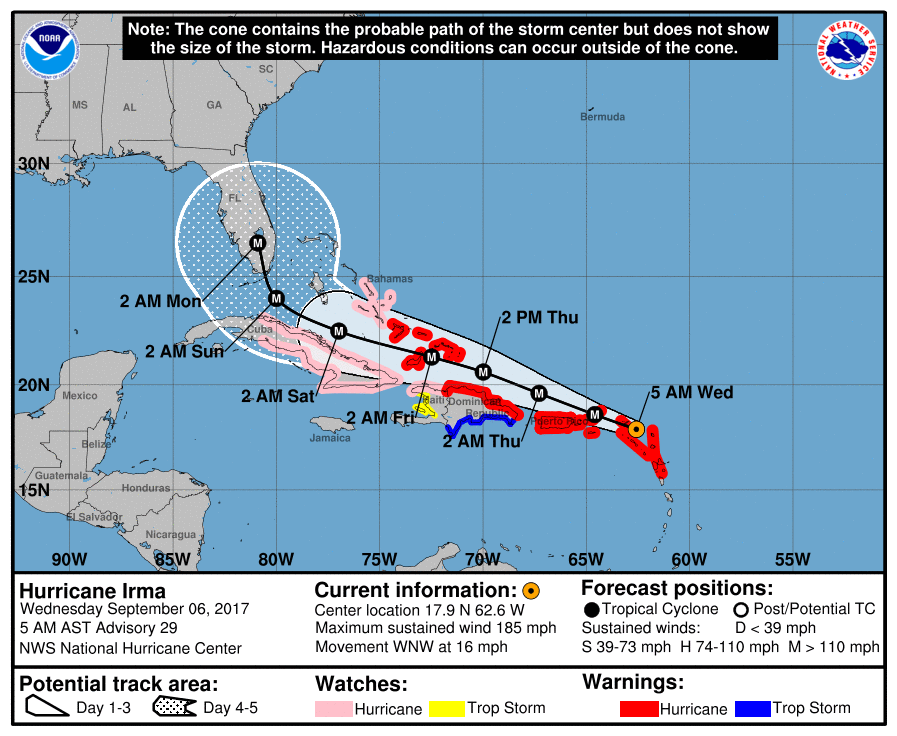 Clearly, this is a devastating forecast for Florida, essentially bringing the storm’s very worst winds and surge to an area from Miami to West Palm Beach. The storm would then continue up Florida’s spine, continuing to deliver punishing winds and waves to the eastern half of the state. However, it is equally important to note that we are discussing a forecast for conditions five days from now. Although hurricane forecasters are pretty good with forecast tracks, the average five-day error is still about 200 to 250 miles in terms of track.

END_OF_DOCUMENT_TOKEN_TO_BE_REPLACED

Harvey was an incredibly emotional forecast that challenged many of us in ways we’ve never been challenged before. In writing this personal retrospective I sought a way to process this experience and convey the emotion of the last couple weeks in words. So this is my story, my call to action, my open letter to the city I’ve come to love.

I grew up in New Jersey and became fascinated by weather, most likely at the age of three. The memories are broken up and fuzzy now, but they’re firmly in my mind. In 1985, Hurricane Gloria came barreling up the Eastern Seaboard, forcing my family to evacuate my grandmother from her home in Atlantic City. My dad taped up windows around our house about four miles inland from the shore. I remember going to the coast after dark as the storm pulled away to (perhaps my parents would now admit, unwisely) “assess damage” to the beach. Gloria’s impacts on the Jersey Shore were modest. My grandmother’s house was unscathed, and life got back to normal in short order. Somewhere along the line Gloria ignited a passion for meteorology. It started with a hurricane in New Jersey, and as I sit here 32 years later, I openly wonder if a rain-laden hurricane in Texas is what extinguishes it. 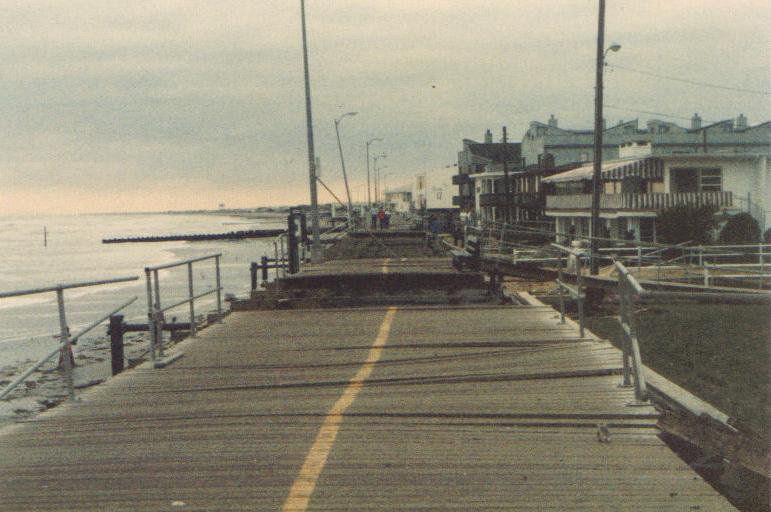 I’ve dealt with a few stressful forecasts in my career. There have been blizzards when I worked in Upstate New York. Hurricane Irene in 2011 had me considering telling my parents to evacuate the same home we shored up for Gloria. In 2012 came Sandy. I had many friends and family members back in Jersey and New York directly impacted by that storm. The lead-up to that storm was one of the most stressful I’ve dealt with, though now a fading second to Harvey. At the time I worked as a meteorologist for the energy trading arm of Deutsche Bank here in Houston. My boss was on a required two week leave, and the onus fell on me to prepare our New York City office for Sandy’s impacts. I remember conference calls, and giving a worst-case scenario forecast I didn’t really even grasp. Sandy was the storm that, as a passionate weather geek, I drew on a map as a kid that wasn’t ever supposed to happen. It was difficult to see the Jersey Shore, my homeland, so ravaged. But my life had brought me to Houston by then, so there was a buffer there to reduce the storm’s emotional impact. But it remained difficult to watch.

Life had indeed brought me and my wife to Houston. We moved here in 2012 after stops in Jacksonville, Southern California, and Upstate New York. Maybe it’s because I somehow grew up deep in Philadelphia Eagles territory as a Warren Moon and Houston Oilers fan (not kidding here at all, I have the 1990s-era Starter jacket to prove it), but I have always had an affinity for Houston. I had no family here, and the first time I visited was on a job interview in 2008. As a broadcast meteorologist in Upstate New York, I had decided that the route I wanted to steer my career toward involved the energy industry. After discussing it over a long period of time with my wife (then fiancée), we decided that Houston would be our goal. It took a few more years, but we arrived in 2012, a year or so after my wife’s brother moved here. My wife’s parents wouldn’t be far behind. Houston didn’t become a home. It became our home.

END_OF_DOCUMENT_TOKEN_TO_BE_REPLACED

Good morning. I hope everyone is finding some peace on Labor Day morning. Our short-term forecast remains more or less locked in for the Houston area, with warm-ish days through Wednesday (highs in the low 90s) before a cold front moves through and brings absolutely splendid weather for the second half of this week. We may see some decent rain chances on Tuesday and Wednesday due to the approaching front, but even so most areas probably won’t see more than about a tenth of an inch of rain (if that).

With that said, we’ve had a lot of questions about the tropics—understandably people are still pretty skittish after our brush with Hurricane Harvey. We get that. So here’s a review of what’s out there. Also, I’d like to remind everyone that while the Atlantic hurricane season officially lasts until Nov. 30, for Texas is effectively ends in about three or four weeks. We are almost there, folks.

All eyes are on Irma, a major hurricane with sustained winds of 120mph moving toward the Northwestern Caribbean Sea. It should reach the vicinity of Puerto Rico by Wednesday night, and poses a significant threat to the Caribbean Islands. Here’s the latest (10am CT) track forecast from the National Hurricane Center. 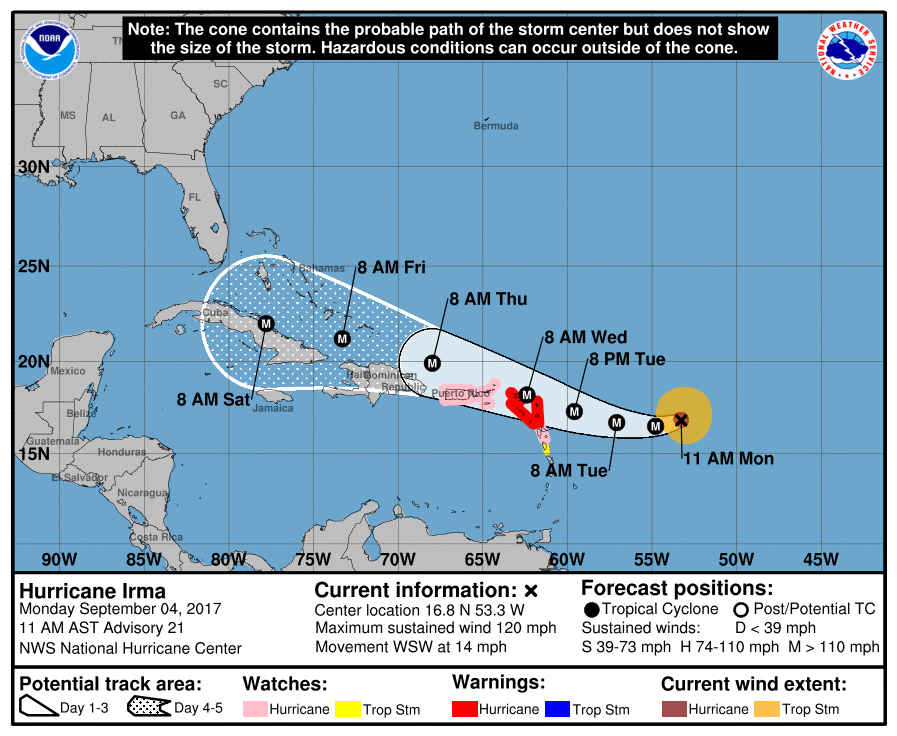 Understandably there is a lot of concern about where the system goes in five to seven days, when it begins to approach Florida and the continental United States. There has been a westward movement in the forecast models over the last day or two, leading to some local concerns that the track may continue to shift westward toward a Texas landfall. We continue to remain pretty confident that is not going to happen.

With that said, the storm’s movement after about Thursday is fairly uncertain. Generally, the ensemble members of both the European and GFS models show the storm moving west-northwest just north of Cuba, and making a turn north just before reaching Florida, over Florida, or just after Florida (into the eastern Gulf of Mexico). Irma is expected to make this northern turn after it finds the western edge of a large ridge of high pressure over the Atlantic region, but at nearly a week from now it’s impossible to determine where that will be.