As Eric noted on Monday, March was a remarkable month this year for how warm it was in Houston. But it was not quite like March 1907, which will remain atop the leaderboard for warmest March in Houston’s recorded history. 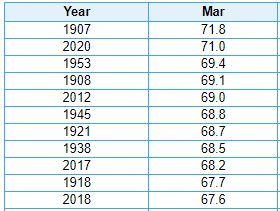 Three of Houston’s top 10 warmest Marches have occurred in the last four years. None could beat March of 1907. (NOAA)

Although we are in a warming climate, where warm records have tended to outnumber cold records by a 2:1 margin in recent years,  when you look back at history, you will occasionally find some random, weird anomalous events. The month of March in 1907 ranks among them.

Cast your mind back more than a century ago. In 1907 Houston was but a town, with roughly 60,000 residents. Whereas today Houston is the fourth largest city in the United States, it was nowhere near the top 10 rankings of most populated cities of that era. 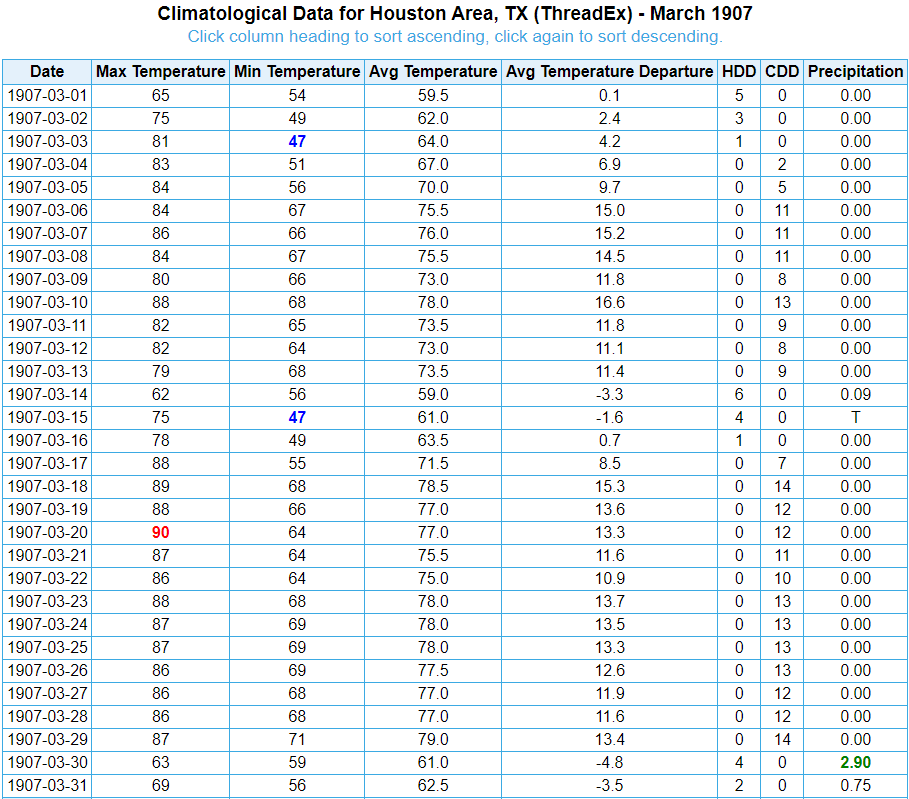 There was little about March 1907 that was cool in Houston. More than half of the month (16 days) saw low temperatures of 65° or warmer, a record for any March. Over the last 10 years, in a warm climate, in a much more robustly developed Houston, we have only averaged 6 to 7 mornings that warm in March. This year’s March is the closest to rival that since 1955, matching that year’s 14 days of not dropping below 65 degrees.

Houston only had one 90 degree day in March 1907, but the city recorded 15 days above 85 degrees that year, which is far and away the record for any March. The next closest are 1908 and 2017 when we accomplished that feat a mere 8 times. This year’s March only saw 5 days above 85 degrees.

END_OF_DOCUMENT_TOKEN_TO_BE_REPLACED

Note: In our second installment of the Space City Rewind, we tackle the biggest snow on record in Southeast Texas. Our first installment about the November 1992 tornado outbreak can be found here.

“All of Wednesday night polar spirits swept the earth until boundless snow had deformed the withered heath and the people of this section for the first time within the memory of the oldest inhabitant, looked out upon nature fringed with a beard made white with other snows than those of age.” – Brenham Daily Banner, February 15, 1895

Back on Christmas Eve in 2004, much of South Texas was blanketed in white, as a perfect setup to create a miraculous White Christmas occurred. Galveston received four inches of snow, Angleton six inches, Friendswood three inches, and Bay City 8-10 inches. While the 2004 Christmas Eve miracle stands almost on its own for modern Southeast Texas snowstorms, the great Valentine’s Day snow of 1895 stands alone as Southeast Texas’s and the Gulf Coast’s greatest snowstorm of all-time. The following interactive map shows snow totals from this remarkable event, which affected a swath from Texas to Maryland.

Above: An interactive map with snow reports and some details from the 1895 storm

So why did this event occur? How disruptive was it for coastal residents? Will we ever see its like again? Put your feet up, because the latest installment of the Space City Rewind takes you back to the 19th Century: The Great Snowstorm of Valentine’s Day 1895.

END_OF_DOCUMENT_TOKEN_TO_BE_REPLACED

We begin with the November 21, 1992 Southeast Texas tornado outbreak. END_OF_DOCUMENT_TOKEN_TO_BE_REPLACED