As we noted in this morning’s post, it’s allergy season outdoors, particularly from tree pollen. Sneezing, itchy eyes and other symptoms are pretty common right now. But did you know there are indoor irritants that can also cause these symptoms and you can do something about it? With this post, our sponsor Reliant wanted readers to know that now is a great time to consider what you can do to improve the quality of the indoor air inside your home.

The first step is to determine whether you need an indoor air quality check-up. If you answer “yes” to any of the following questions, then it is probably a good idea:

So what is an air quality check-up? As part of this service, air quality specialists perform a visual inspection of your home’s HVAC system, assessing the quality of the air you and your family breathe. There could be any number of underlying problems, from poor ventilation to unexpected sources of odors and allergens.

The goal of the assessment is to diagnose those problems, and then find solutions that leave you with a healthier, fresher home. Here are some of the potential solutions available to improving the air quality inside your home:

Reliant offers an indoor air quality assessment for just $49. This service is available to anyone, regardless of electricity provider, but Reliant customers receive 10 percent off.

People often think Reliant only provides electricity, but they do a lot more than that! They want to ensure Houstonians feel safe and secure in their home, which is why their home services team provides indoor air quality checks, along with HVAC repair and efficiency services, home maintenance and home security. If you’re interested in having your home’s air assessed, please call (833) 480-7835.

Note: This is a sponsored post in which I review a security system installed by Reliant.

Here’s a little secret: I have never been a big believer in home security systems. However, this has been a non-negotiable point with my wife, who turns out is a believer in home security systems. We had one installed in our first home, more than 15 years ago. It was a fairly basic system, and it seemed to make my wife happy. I paid the monthly bill and then forgot about it. Fortunately, we never needed the system to work during an emergency. Over time, I forgot the access code. My assessment of security systems never changed. 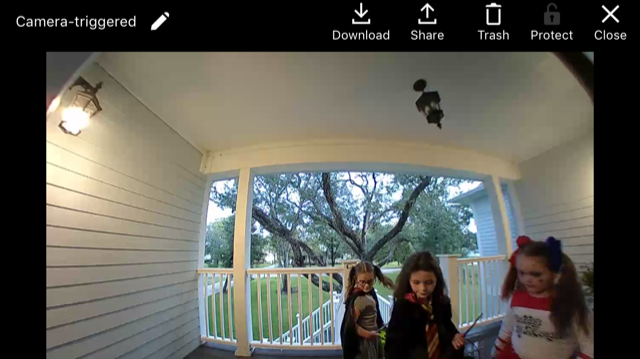 Uh-oh, it looks like we’re being invaded by Harry Potter characters.

Nearly a year ago, we moved into a new home, and because of Space City Weather’s relationship with Reliant, they invited me to test out their security system. (I paid for the installation, and received a discount for services because I am an electricity customer). As part of our Security by Reliant package, we had sensors installed on six doors, an interior camera, a doorbell camera, a motion detector, and sensors on the garage doors that allow them to be opened remotely. This was a nice package but far from “the works” I could have had installed. All of these features were non-intrusive in the sense that they blend into the house. 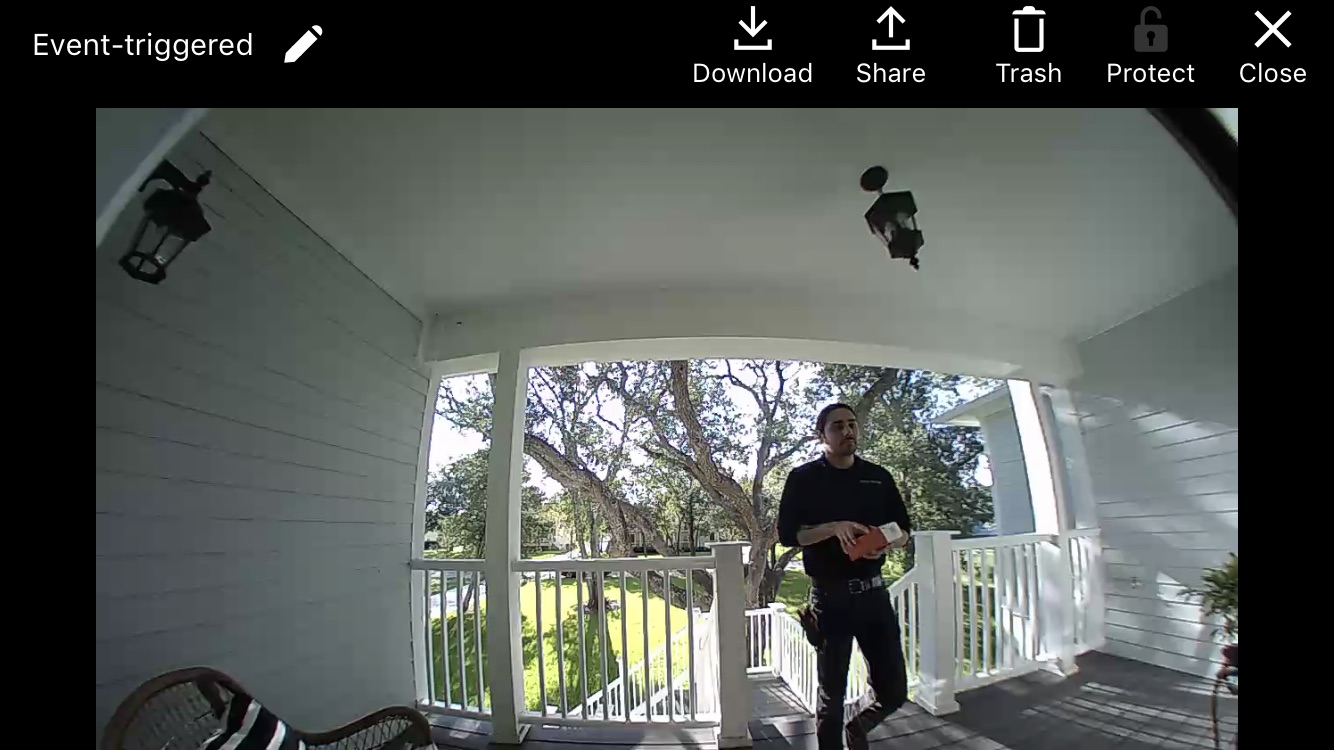 Reliant’s installer was friendly and helpful. Here we’re testing out the doorbell camera.

Now, I am sure that alarm systems have come a long way in the 15 years since I had one installed by another company. Nonetheless, I have been pleasantly surprised by the performance of the Security by Reliant system, and more importantly its ease of use. It is all pretty intuitive, and allowed me to turn my home into a sort-of “smart home” without investing thousands of dollars. I can do all of the important things through a single app, such as:

The Wi-Fi doorbell is especially nice, because it is easy to see who is there (whether we are home, or not) and to talk with him or her through the system. 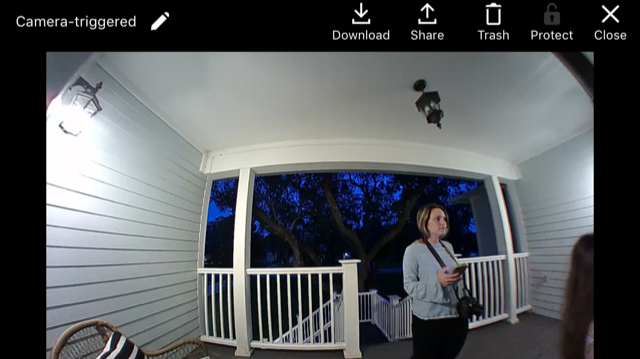 I really just want three things from a security system: that it is reliable, that it provides a sense of security, and my wife is happy. (Ok, being honest, the last thing matters most). And the reality is that, at least after year one, Security by Reliant hits all three for me.

Reliant and I are teaming up to offer Space City Weather readers a special offer – if you sign up for Security by Reliant by clicking this link, or calling 1-844-443-0180 and mentioning promo code “SCW”, you’ll receive your first 2 months FREE!

During Hurricane Harvey I hunkered down with two fully charged laptops, a mobile phone, and several power banks to keep the phone charged. This was perhaps not the most professional setup, but I was living in a third-floor apartment at the time (we were building a home), and frankly I did not think sustained power loss would be a major concern. Fortunately, the power never blinked off during Harvey, and I was able to remain connected at all times to the Internet and this site. The power staying on, however, is the exception rather than the norm during a hurricane. So I knew I needed a better solution for future storms. Fortunately our sponsor, Reliant, had a solution and provided me with a portable power station—the Yeti 1000—from their sister company, Goal Zero. 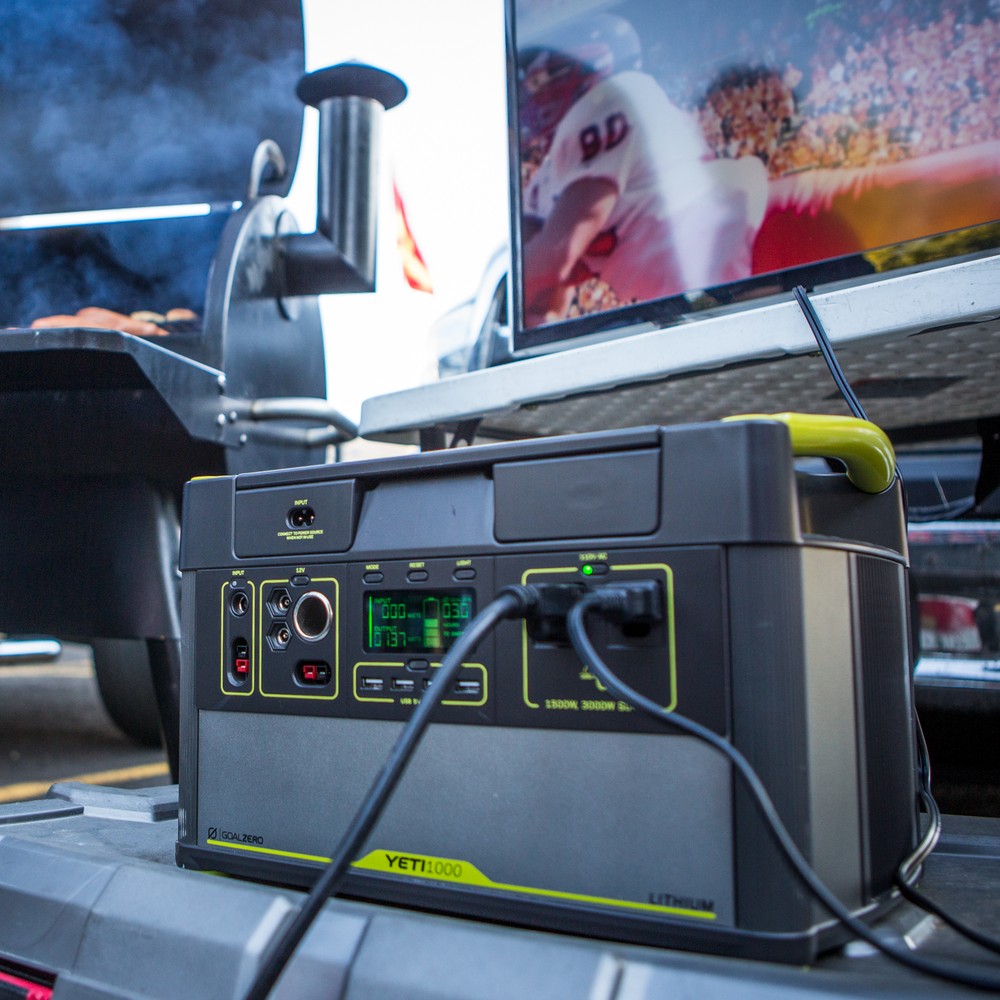 I am not a particularly handy person, so technology like this intimidates me a little bit. One box arrived with the power unit, and the other a solar panel about one meter in length and diameter. What was I supposed to do with this?

It turns out that the Yeti is ridiculously easy to use. The first step was to plug in the power unit—about the size of a 12-pack of beer, but twice as heavy—into an electrical outlet. Within about six hours the battery was fully charged. This was a month ago. I checked the unit just now (which is tucked behind a chair in my office), and it remains at 100 percent. I understand the battery will maintain a full charge for nearly a year so I can simply put the unit away and forget about it until the power goes out.

And what happens if the power goes out? This unit could literally power two laptops and several mobile devices for days, and days, and days. It could also power a medium-sized refrigerator for about a day, before the battery runs down. In that case, one could use the solar panel (which is also plug and play) to recharge the power unit during the daytime. Of course, during a hurricane itself, you’re not going to get much sunshine. But after the storm, certainly, this could probably keep a medium-sized refrigerator going intermittently for several days with the use of the solar panel. I can’t speak to this for every refrigerator or larger appliance, but if you have questions they can be answered by [email protected]. Additionally, the unit itself has a digital display that regularly updates the amount of power being used, and the battery time remaining. It is all incredibly intuitive. 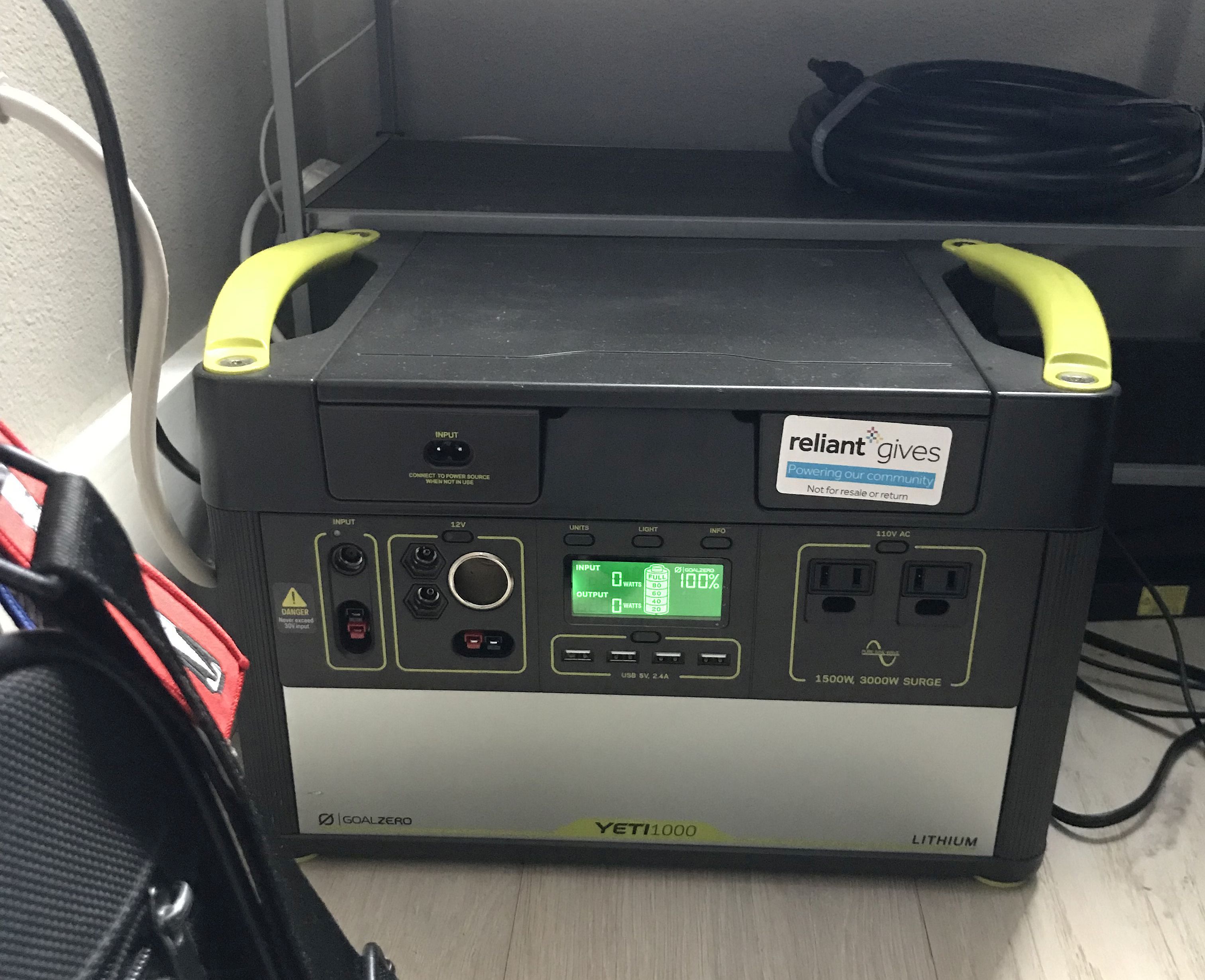 My Yeti, still fully charged after sitting dormant for a month.

This unit is not meant to replace the full-home functionality of a large outdoor generator. That is not its purpose (nor its cost). Rather, it is meant to provide some peace of mind during a storm, to keep a few lights on, a fan running, power a television, or to keep your electronics charged. Moreover, it does so in a compact package, with absolutely no noise or mess. And when it’s not storming? This is an amazing unit to bring tailgating, camping, to the beach, or anywhere else you don’t want to entirely leave the comforts of civilization and connectivity behind.

But mostly, for me, it brings piece of mind knowing that during the next storm I’ll be able to remain plugged into Space City Weather, and provide timely information and weather updates to all.

Last year, after a sponsored post about generators, we received an extraordinary number of questions from readers on the site, on Facebook, and on Twitter. So as we gear up for hurricane season this year—when homeowners are considering whether to make such an investment—we decided to go back to Reliant for answers to some of the most commonly asked questions.

Will the noise from a generator upset my neighbors? Are there Homeowner Association Deed Restrictions?

Generators are fairly quiet and generally quieter than your air conditioner running today. The thing to keep in mind is that the generator only produces noise when it is activated, either in an emergency situation or during its weekly test cycle to ensure systems are running properly. These cycles only take about five minutes and can be scheduled for the most convenient time for customers, often during the day when you’re at work or running errands. The cycle checks battery function, oil levels and other diagnostics to keep the engine primed and in good shape.

Regarding HOA restrictions, Reliant generators typically meet all noise requirements. However, if you live in an area with stricter regulations, the company can also provide additional solutions to suppress the sound.

When the power goes out, do you need to turn your generator on?

This is the most frequent question the Reliant home services team receives from customers. If you have a fully automatic backup generator, these require no action on the customer’s part. The Smart Transfer Switch monitors the household’s electricity and sends a signal to activate the generator if it detects an outage. It only takes about 5-8 seconds for the generator to automatically turn on once you lose power. For non-fully automatic solutions, such as the Reliant Portable Home Power Kit, all you have to do is flip a switch and you’ll be up and running. 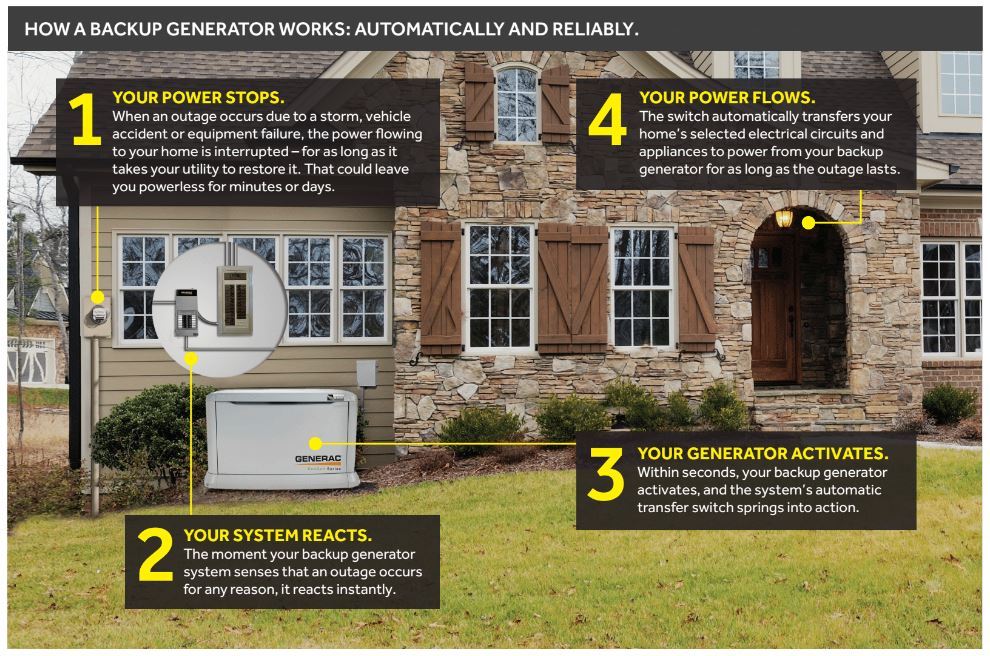 Incrementally, what size generator will I need to power basic services, such as lights, phone, alarm system, Wi-Fi, refrigerator, etc?

Reliant provides free in-home assessments, in which Reliant’s generator specialists help determine the best generator for your needs and budget. In general, 10-14 kilowatt (kW) generators are enough to run individual survival appliances, such as a refrigerator, sump pump, or lights. A 15-20 kW generator could run a small home with one AC unit, and a 21-25 kW generator could power a small to medium-sized home. END_OF_DOCUMENT_TOKEN_TO_BE_REPLACED