7:40 pm CT Update: Just a quick post this evening on Hurricane Delta. The storm has intensified further since this afternoon, reaching maximum sustained winds of 145 mph at 7pm. However some wind shear in the mid-levels of the atmosphere has lately begun to affect Delta and may prevent further strengthening tonight, or even weaken the storm.

Regardless, Delta will bring devastating winds and storm surge to the Yucatan Peninsula later tonight and on Wednesday. After this time it will enter the Gulf and track west-northwest across the Gulf of Mexico. In terms of what happens after that, not much has changed with respect to the track forecast, which turns Delta north and brings a hurricane to the Gulf coast Friday evening or early Saturday—about three days from now. It seems the most likely location for this landfall will lie somewhere between the Texas-Louisiana border, on the western side, and Morgan City, on the eastern side. Even though we are within three days of landfall, some uncertainty remains, and this is reflected within the National Hurricane Center’s forecast cone. 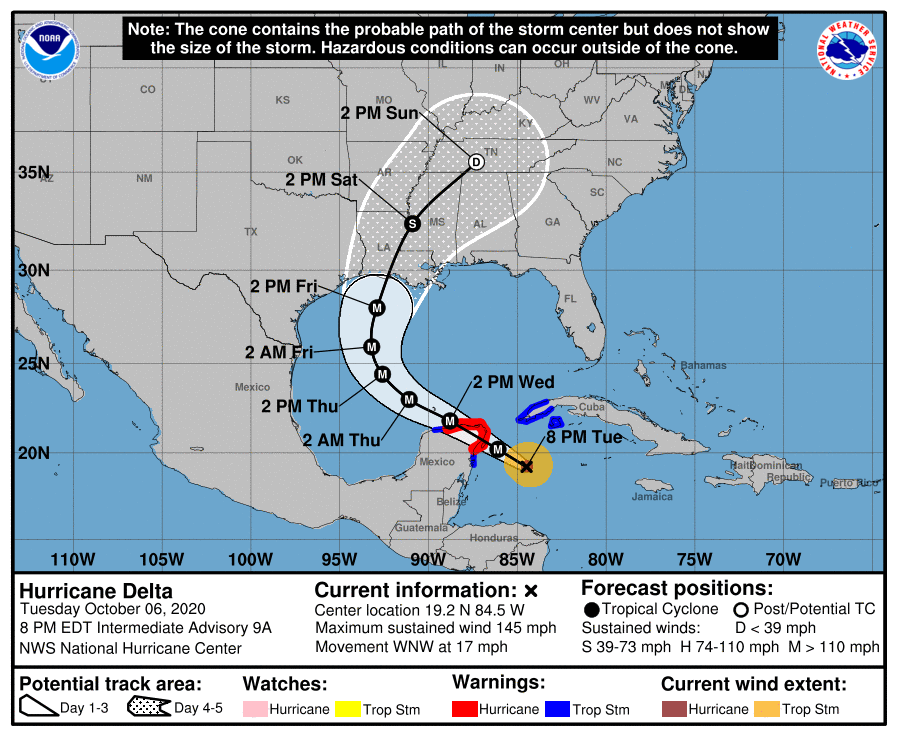 By tomorrow morning we should have a pretty good sense of the ultimate track forecast for Delta, as the overnight model runs ingest data from today’s aircraft reconnaissance missions as well as supplemental weather balloons to sample the atmosphere helping to control the steering flow for this system. The odds still strongly favor a landfall in southwest or south-central Louisiana, but there is enough uncertainty that we’re going to need to continue to watch Delta closely along the upper Texas coast.

That’s just what we’ll do, of course. In tomorrow morning’s post, which will go up no later than 7:30am, we’ll have the latest on track and potential impacts along the upper Texas coast later this week, as well as Louisiana.

13 thoughts on “Delta nearing Yucatan, will move into Gulf on Wednesday”