It’s another cool morning across the region, with highs generally ranging from the 50s up north to the lower 60s along the coast. It is hard to believe we reached 91 degrees only on Sunday, but fall truly has come. Some inland parts of the region may not hit 80 degrees for the rest of this month, although after today we’ll see a moderate warming trend for a few days. If you’re tired of the gray weather, Sunday is your best hope.

Today will probably be similar to Tuesday, with mostly to completely cloudy skies, highs only around 60 degrees for northern areas, and mid-60s for the city. For better rain chances, we’ll need to look to areas far north of the city (i.e. north of College Station or Huntsville) and along the coast and offshore. Chances in Houston will probably be in the 20 to 30 percent range, with what does fall coming down mostly as light mist or drizzle. So basically, another gray day.

Mostly cloudy skies continue, under a northeasterly flow. There’s plenty of moisture toward the second half of the week for the atmosphere to work with, so we’ll probably see more widespread light to moderate rain for Thursday and Friday. 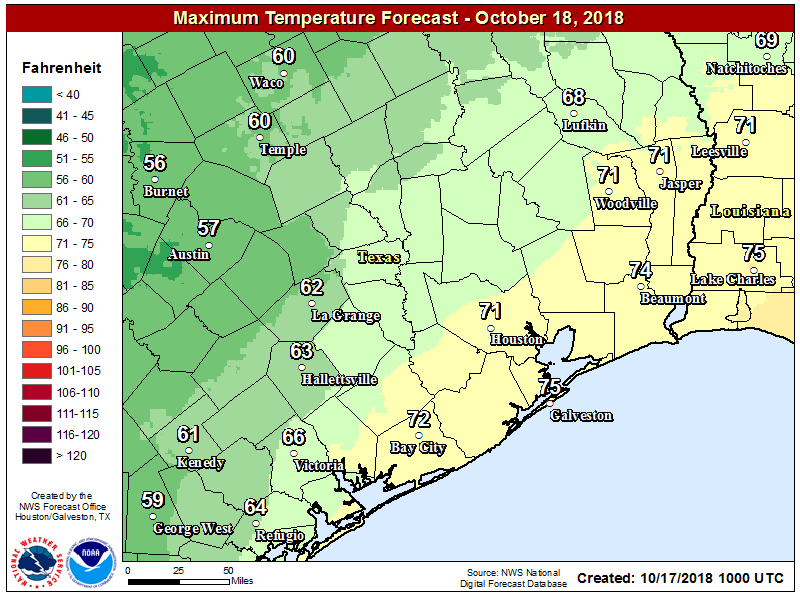 High temperatures should get back into the 70s for most of Houston by Thursday. (National Weather Service)

Accumulations, for the most part, should be measured in tenths. Highs should manage to make it into the low 70s, which is still about 10 degrees below normal levels for this time of year.

It looks like the region’s next moderately strong cold front will push through on Saturday. Unstable air ahead of, and along with this front should provide a bump in rain chances to around 50 percent on Friday night and Saturday. Overall, most areas probably won’t see more than a quarter of an inch, or so, but I think there’s definitely the potential for some localized heavy showers where thunderstorms pulse up. If you’re planning to be outdoors on Saturday, this is something to be aware of. Highs Saturday should be in the low 70s for much of the city, but warmer along the coast. 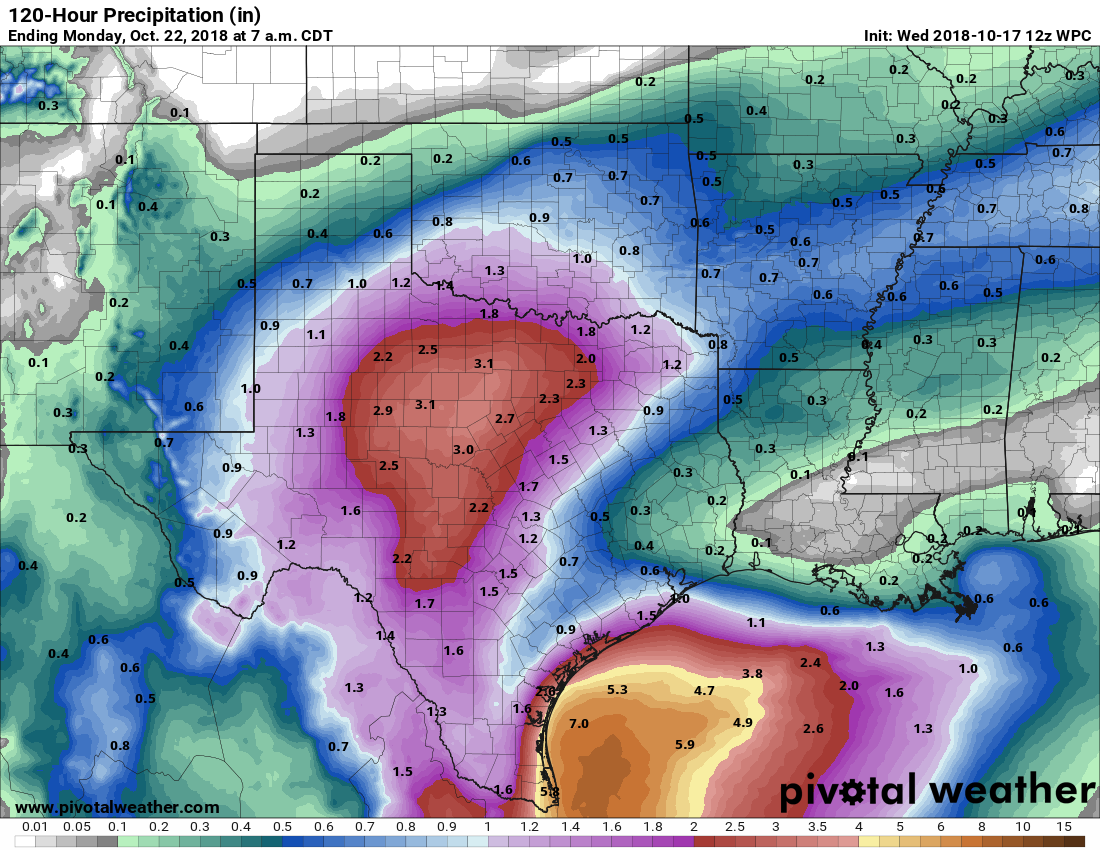 Overall rain accumulations for now through Sunday look quite moderate for most of the Houston area. (Pivotal Weather)

With the front’s passage, Sunday’s forecast looks somewhat better. With drier air, the high of around 70 degrees on Sunday should feel mighty fine, and by the late morning or afternoon, skies could be partly to mostly clear. It’s not a guarantee, but as of now Sunday looks to be one of the finest weekend days we’ve had in a long time. Fingers crossed. Lows Sunday night should drop into the 50s for everywhere but the coast.

The forecast for next week is not exactly clear—some models bring another front in by Wednesday or so, others have a warming trend through much of the week. So for now, who knows.

17 thoughts on “Dreary weather continues, but we’re holding out hope for Sunday”