The sunny weather we’ve enjoyed this week is now gone, as high pressure has been firmly supplanted by an onshore flow. We’ll see a steady diet of cloud cover through Saturday, with moisture moving onshore that will culminate in the potential for heavy rain on Friday night and Saturday morning. To mark this threat, the National Weather Service has issued a Flash Flood Watch for the region from Friday afternoon through Saturday morning. We discuss this threat below. 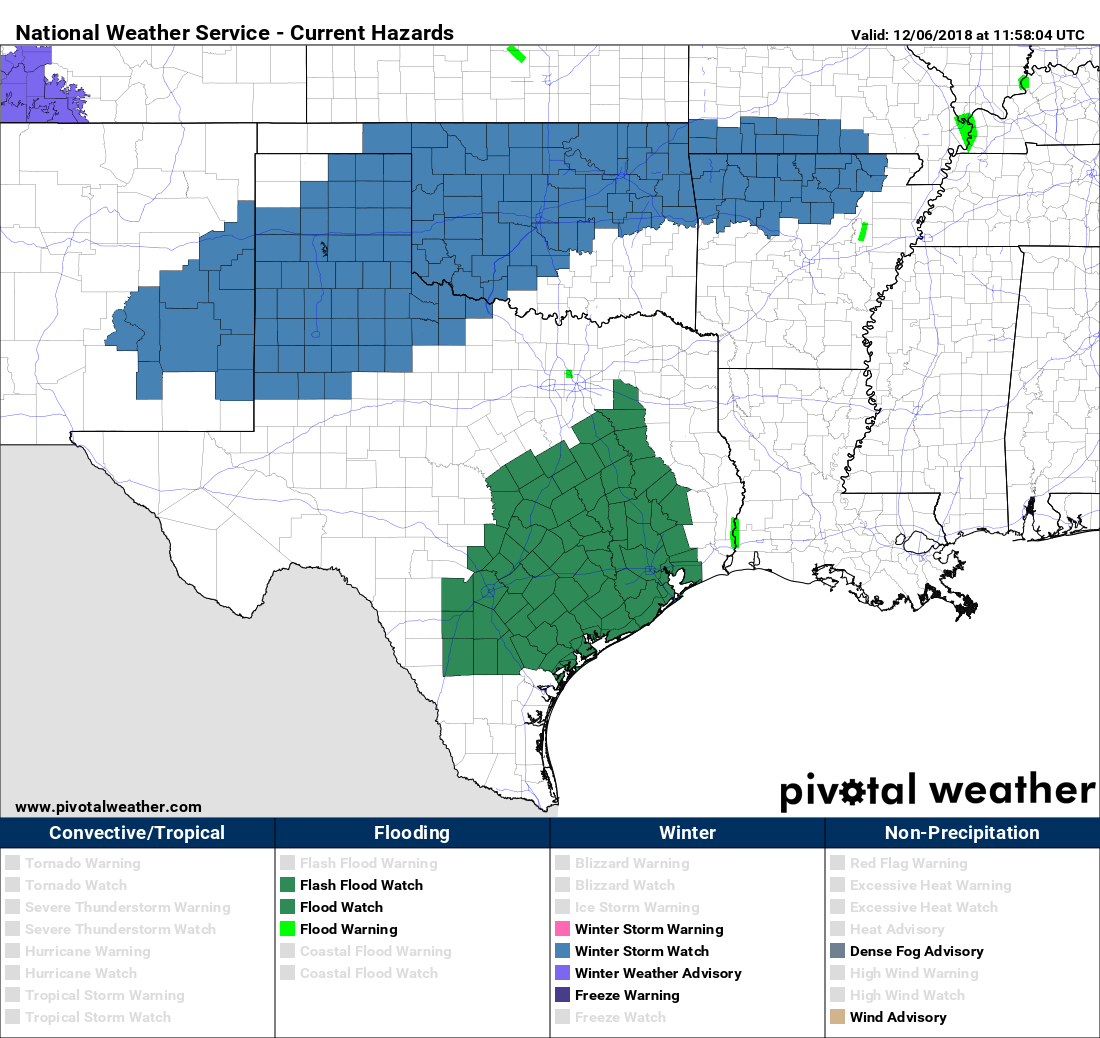 After a start in the 50s, highs today will climb into the upper 60s under mostly cloudy skies. Southeasterly winds will transport moisture inland throughout the day, and although we can’t rule out a few isolated showers we don’t expect anything significant. Low temperatures Thursday night won’t fall much below the mid-60s for most of the area.

The upper-level low pressure system will be moving down through Texas, approaching the Houston region from the north-northwest. We expect some light- to moderate rainfall on Friday in the Houston metro area during the daytime, but for the most part, heavier showers should remain west of Harris County until around sunset or so. Highs Friday should climb to near 70 degrees under mostly cloudy skies.

Conditions will probably begin to deteriorate around, or shortly after sunset in the Houston metro area. We expect the region to receive 3 to 6 inches of rainfall between sunset Friday night and mid-morning on Saturday, and we likely will see some higher isolated totals around 8 inches or so. This is going to cause some flooding problems on area roadways, but bayous and streams around the region are low enough that they should be able to absorb the majority of this rainfall. 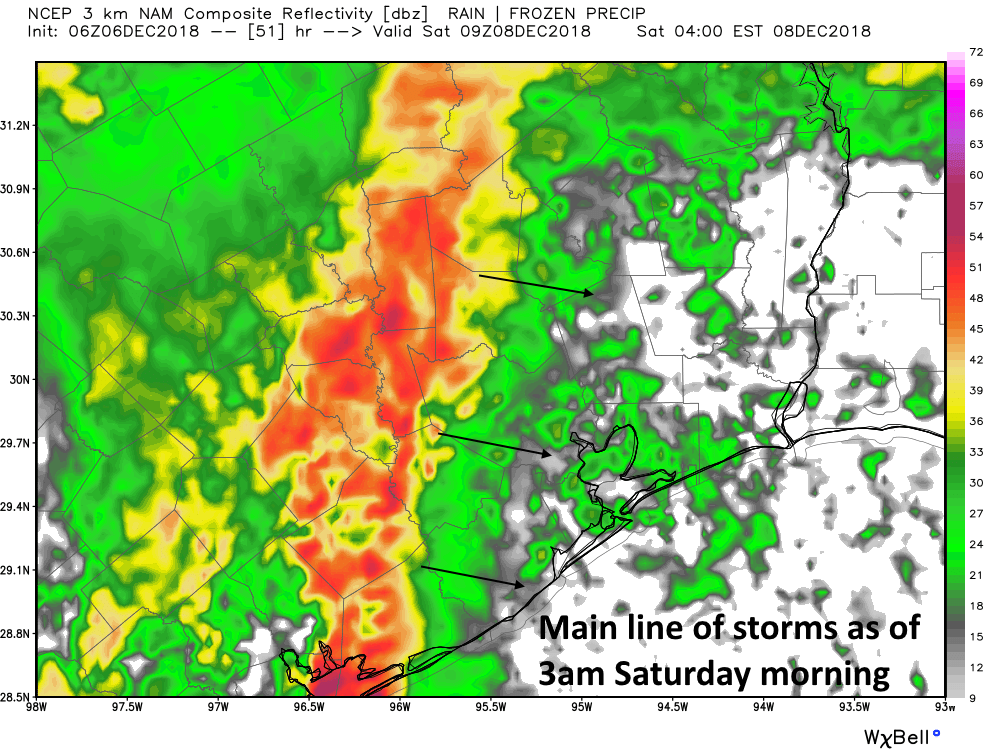 In terms of areas most favorable for rainfall, we can generally say that slightly higher amounts are likely north and west of Highway 59. However, forecast models are pretty consistent in delivering a healthy dose of heavy rain to everyone in the region. If you have plans Friday night around town, I’d either re-consider them, or have a strategy to watch the radar when you’re out. The western half of the city is likely to see the onset of heavy rain by or around midnight, while the eastern half probably won’t see the heavier rains move in until early Saturday morning. 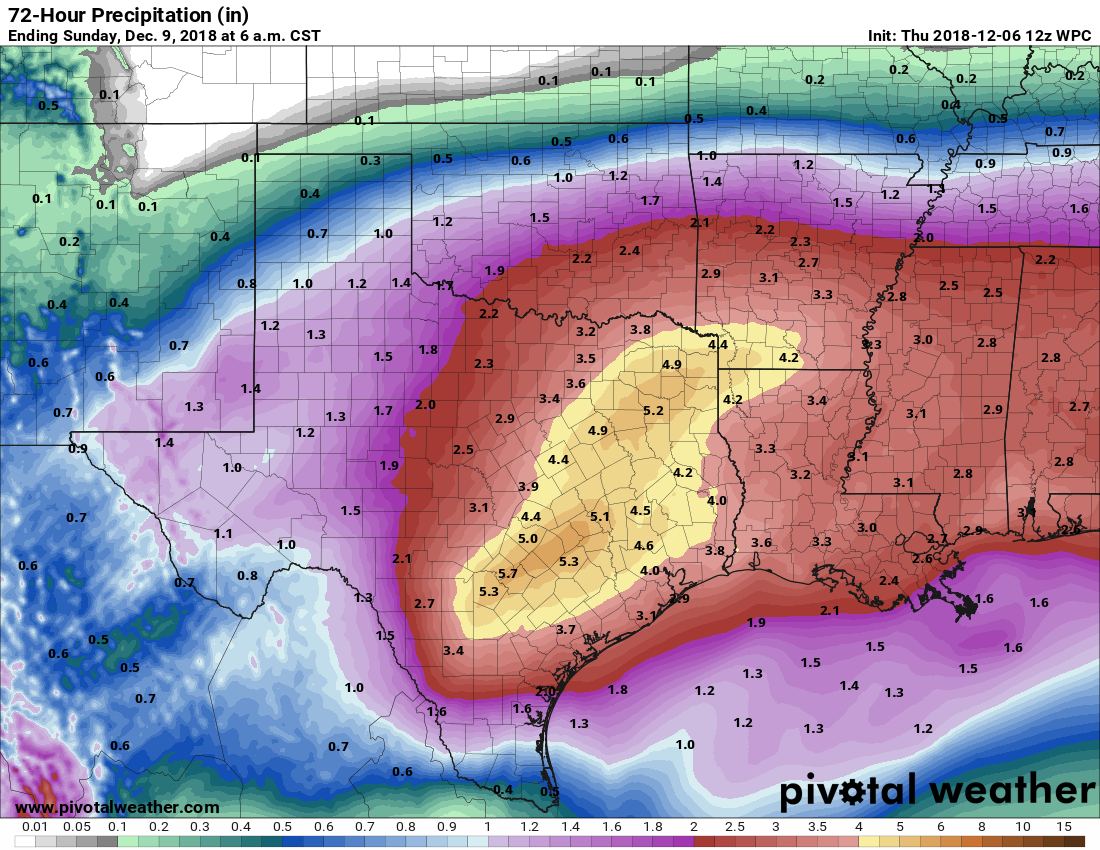 In terms of severe weather, there is the potential for some strong thunderstorms and straight-line winds, but those threats appear to be greater to the southwest of the Houston metro area. Our principal concern remains heavy rainfall.

This blob of rainfall should be chased from the area by a line of showers and thunderstorms representing the actual cold front on Saturday morning. Right now I’d anticipate this front moves through the city just before sunrise on Saturday, give or take a few hours, and we may see some remnant showers linger through the mid-morning hours. However, drier and colder air will move in behind the front, and this should help to end the threat of rain. Temperatures will fall into the 50s by the afternoon, with overnight lows likely in the 40s.

These will be cold, dry, and sunny days with highs only in the 50s. Both nights will probably see lows in the upper 30s for inland areas, and 40s for the coast. Hopefully the region won’t have too much drying out to do during these days.