Oh, my friends. We hear you. You’re tired of us saying, “There are a lot of uncertainties” when it comes to forecasting Tropical Depression #14 and Tropical Storm Laura. But the fact of the matter is that the latest model guidance is giving us less clarity, rather than more. I’m going to discuss the realm of possibilities, but first I want to start with this:

The overall probability of the Houston region, including Galveston, seeing significant, sustained effects from one or both of these storms remains fairly low. What do I mean by this? At present, the odds of Galveston seeing hurricane force winds in the next week is under 10 percent. The odds of the Houston region seeing 5 inches or more of rainfall, total, is probably less than 10 percent too. We’re not saying Houston will not experience severe weather in the next week. What we’re saying is that given the spread of possibilities, the overall chances are fairly low. It’s our job to let you know if that changes. And we will.

Now, onto the forecast. As the National Hurricane Center predicts, both TD 14 and Laura are likely to move into the Gulf of Mexico. The depression will come first, on Sunday, after moving across the Yucatan Peninsula. Laura will follow, likely traveling near or over Cuba. Because of these land interactions, both systems may only be weak tropical storms, or depressions, upon entering the Gulf of Mexico.

Normally we’d be scared pants-less when a low pressure system enters the Gulf, with its warm water, in August. But the combination of these land interactions, as well as less than ideal wind shear and dry air over the Gulf, suggest neither of these systems are locks to become hurricanes; and if they do, there is no signal whatsoever they will become major ones. 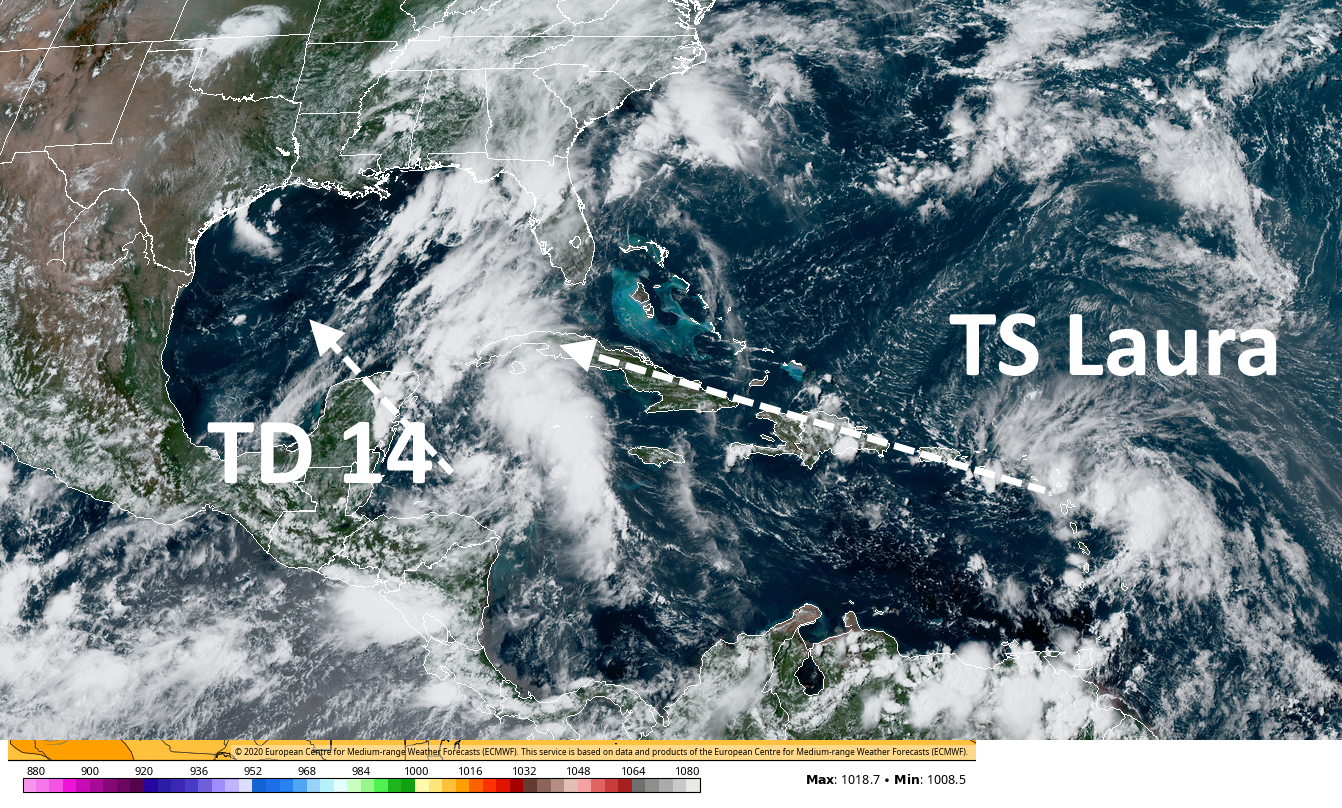 The big question is track, and the forecast models are all over the place. For TD 14, most of them have made significant shifts over the last 12 hours. Some, but not all, have shifted their landfall predictions from the Houston region, down the Texas coast, more toward Corpus Christi. (Update: The National Hurricane Center’s 4pm CT track forecast for TD 14 has shifted significantly south). Given this wide variability, we have very low confidence in TD 14’s track.

One thing to note is that, should TD 14 go more toward the central Texas coast rather than a more northward track, this may open up a lane for Laura to follow a more westerly track across the Gulf. Instead of moving into the Florida Panhandle, therefore, it may eventually threaten Louisiana or even Texas. The following plot of the UK model shows how this might work. If you look closely, you can see the Fujiwhara Effect at the end of the run, as TD 14 dips southwest, and TS Laura jumps north.

12z UKMET shows #Laura quite a bit south of previous runs and takes the weak system right into Hispaniola. Intensity forecast thereafter would be extremely difficult as it would rely on the organization of both #Laura and #TD14 pic.twitter.com/7EjFgSEn0y

We always talk about the ensemble models, so here’s the forecast for “low locations” from the European model that has just been run. The first image shows low locations on Monday night, when we can see a bunch of weak TD 14s or TS Marcos moving toward Texas. (Note, sea level pressure is 1013 millibars, so numbers from 1000 to 1005 represent very weak storms). The point here is that, even for a forecast less than four days from now, there is very little agreement on track. 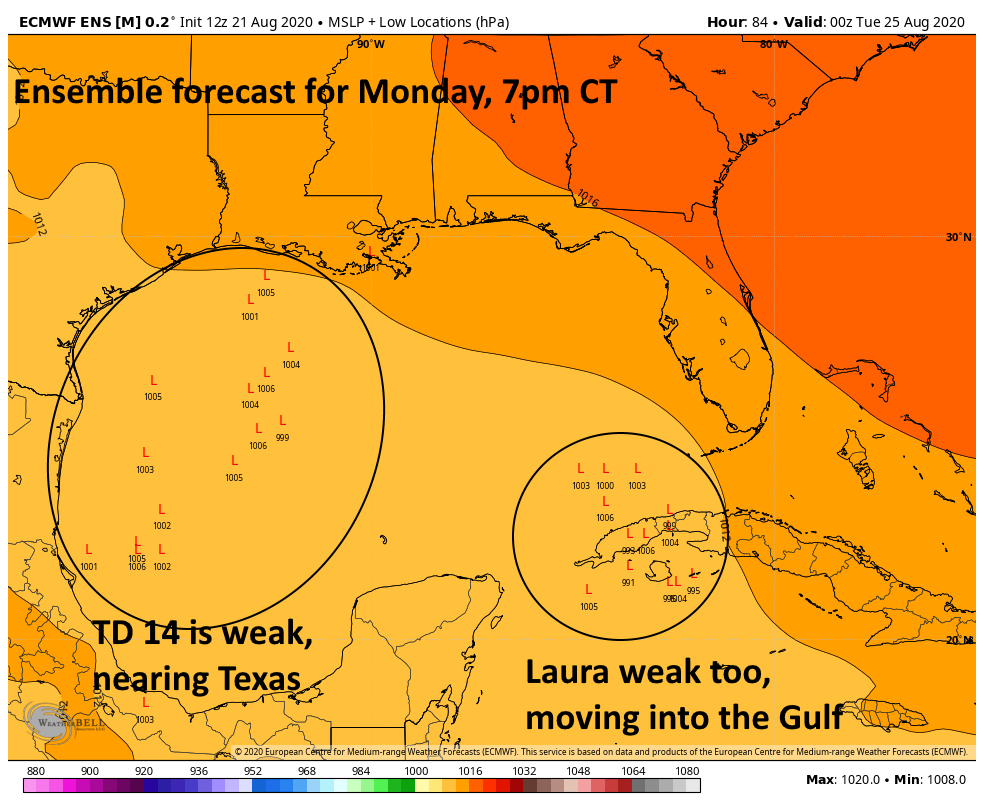 Now let’s jump ahead to Wednesday morning. This is just 36 hours later in the forecast period, and we’re taking a look at the same plot. TD 14 has gone poof, and in its wake “Laura” has moved westward, toward Texas or Louisiana. Some of ensemble members have developed a slightly deeper and stronger system, but most are still tropical storms. 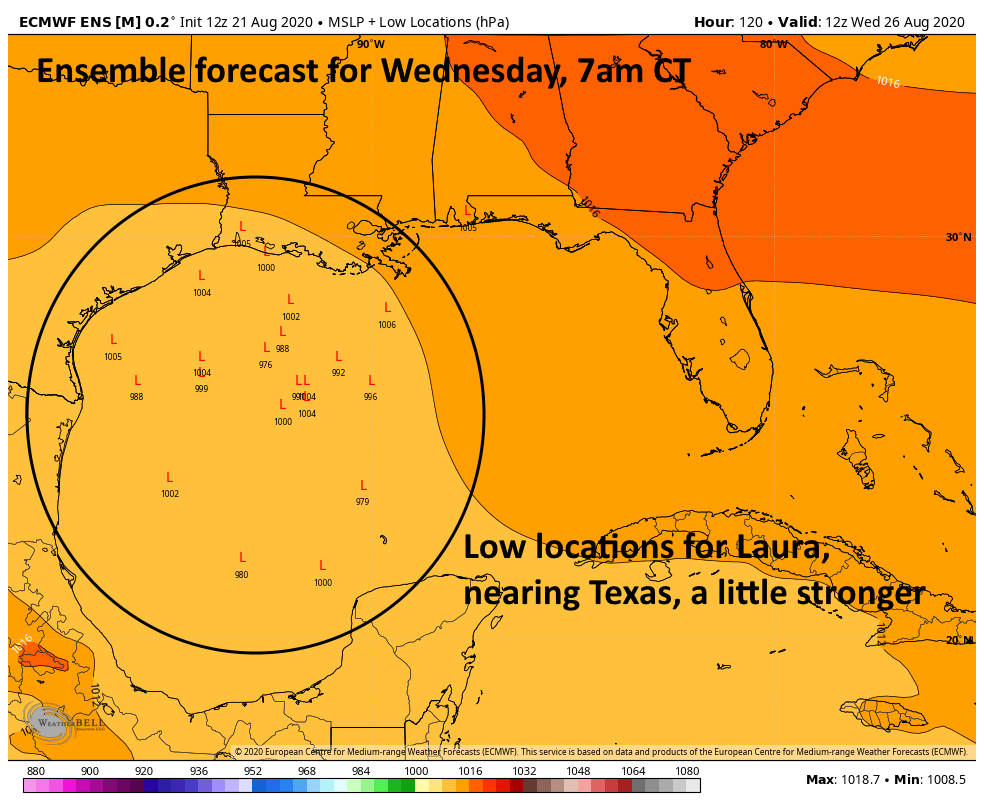 So yeah, it’s pretty much chaos. There are so many forecast challenges here it’s hard to know where to begin. Bottom line: We’ve got to watch out for TD 14, and potentially Laura as well. But as for specific threats, we’re a ways from saying anything intelligible. We’ll continue to track the madness, that we can promise.

34 thoughts on “Friday afternoon update on the tropics, which are just a mess”