Matt here with a special Friday evening update for you, Houston. Yes, the late afternoon run of the GFS operational model showed a significant tropical system crashing into the Texas coast. Some of us in meteorology refer to this as the “happy hour” run of the GFS. I’m going to walk through a pretty basic forecasting approach to whether or not I would put much (any?) stock into the GFS operational model.

If you’re curious, here it is:

Today’s 18z “happy hour” GFS operational model spins a hurricane into Texas next weekend. No, we aren’t buying into it. (Tropical Tidbits)

No, you should not worry about it.

Why am I saying that? If you look at the last 10 runs of the forecast from this very same model valid for next Saturday night, today’s is the first to show a storm in Texas.

Of the last 10 GFS operational runs, only the latest one wants to bring a hurricane into Texas. (Tropical Tidbits)

Sure, the last couple runs have trended closer to Texas, but this model is volatile. It’s going to bounce around a lot. I’ve been watching this model for 15 years now. This isn’t an abnormal thing it does.

On top of all this, let’s look at what the GFS Ensemble shows for this same exact timeframe. The ensemble is still basically the GFS model, but it’s run multiple times with some tweaks to the model each time. The intent is to offer you more of a “spread” of possibilities in the forecast. Good forecasters use ensemble based forecasting techniques to help them craft forecasts. I’m focusing on one particular variable here: What each ensemble member shows for sea level pressure centers. Each circle I’ve added to this map is where an ensemble member places the center of something (tropical storm, hurricane, plain old tropical disturbance) next Saturday night. 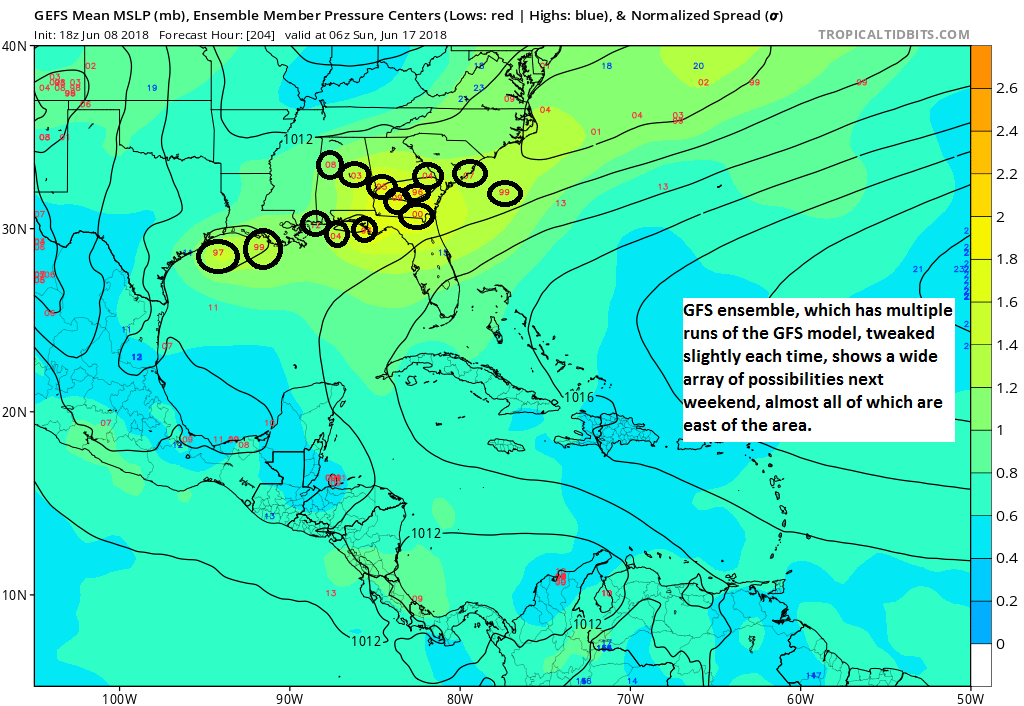 The ensemble “spread” next weekend is still fairly large, most are much weaker than the operational, and the skew is to our east. (Tropical Tidbits)

So even the GFS model’s ensemble is saying that the operational model is probably a.) much too strong and b.) too far to the west.

Sidebar, the maps above are from Tropical Tidbits, which is a great site I use. If you’re into veering into the weather weeds, it’s worth perusing. By the way, the owner of that site is a hurricane researcher at Florida State University. He had this to say about that GFS model run:

While an upper trough may generate a surface trough near Central America next week, the Day 6-7 GFS in the Gulf of Mexico is not worth paying attention to, unless more reliable guidance moves that direction over the next few days.

Everyone loves the Euro, so I’ll just tell you, it doesn’t show this solution. What about the European ensemble. That ensemble contains 51 different members. All of one of them, shown below via another good weather model site, StormVista, has a closed off low pressure under 1007 mb (weak) next Saturday night. 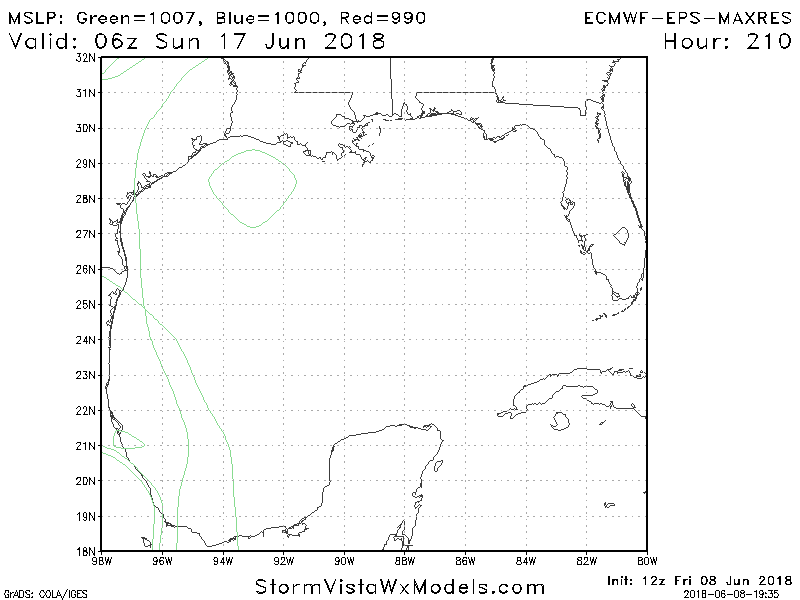 There are other models we can look at, but truthfully, none is really reliable enough at this point to utilize with any confidence.

So what should I expect, then?

Based on forecaster experience, the GFS tends to grossly overdo tropical development, while the European model tends to underdo it. So I think the Euro probably isn’t giving enough credit to potential tropical development in the Gulf late next week, but the GFS is probably way too enthusiastic about it.

In my post this morning, I talked a little about what could happen:

Weather modeling indicates that rain chances should increase a little bit later next week as a tropical wave finds itself in the Gulf. Weather modeling indicates two real possibilities at this point. One is a disorganized, weak system heading toward the Florida Panhandle again. The other is just an increased slew of moisture heading toward deep south Texas (Corpus Christi and the Rio Grande). This could be what’s needed to kick start rain chances a bit more in Texas. With that said however, I am a little concerned it may get directed just a little too far south to really offer the Houston area much relief.

So, my thoughts have not changed at all today, truthfully. Why? I’ve been watching this pattern all week. At my day job, I’ve actually been discussing this setup since last week with my summer intern. If you look about 20,000 feet up in the atmosphere, you see high pressure extending across the Gulf into Texas next weekend. 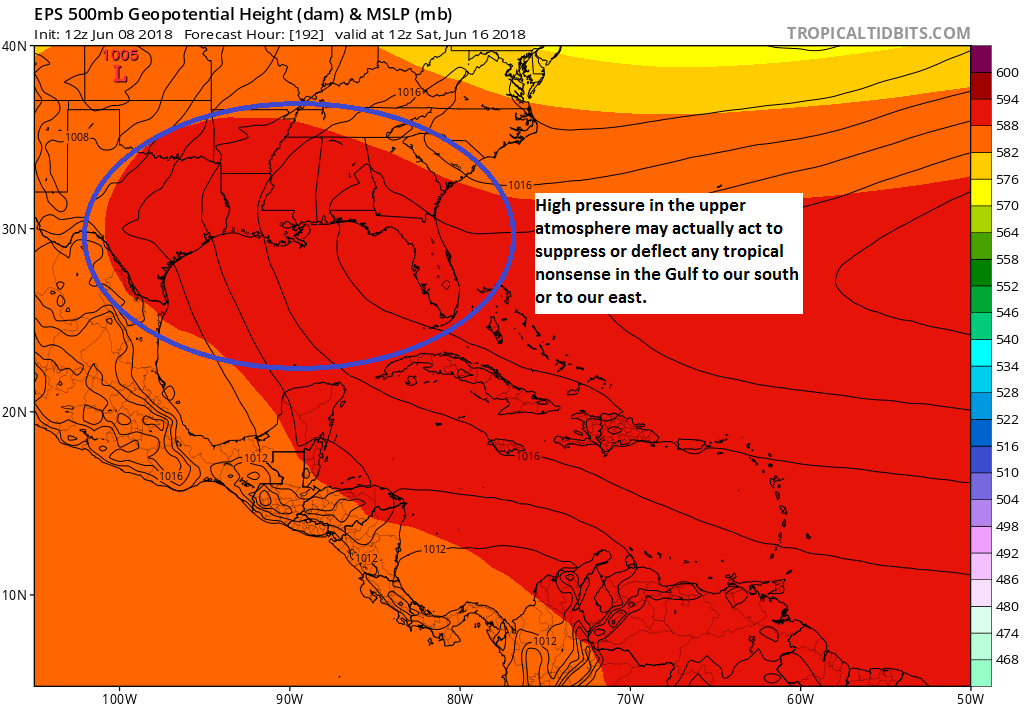 As of right now, I think the upper level pattern over the northwest Gulf favors any tropical nonsense staying to our south and east, should it develop. (Tropical Tidbits)

My current thinking is that if this holds up, strengthens further, or a portion of it closes off over Texas and Louisiana, that would likely suppress any developing tropical system near the Yucatan to our south toward the Rio Grande or allow it to move north-northeast within a weakness in the ridge toward Florida. Should this high pressure weaken overall, yes, then maybe we might have to watch the Gulf a little closer. Or it could just be a stream of tropical moisture that finds its way up here and allows us to have daily afternoon showers and storms at a greater frequency next weekend.

I’m not just saying this to dampen hype. I truly believe this meteorologically: I don’t believe that whatever does develop in the Gulf will be anywhere near the scare-icane shown on today’s happy hour GFS model. But as always, we will continue monitoring.

We have plenty of time to watch, should things change. But I’m going to sleep easy tonight, and you should too. Meanwhile, if the gloom and doom posts scare you, it’s a good time to brush up on hurricane season preparations.

13 thoughts on “Yes, we saw the Friday PM GFS model; we aren’t stressing”