Monday, 1pm CT—Houston remains in the midst of Hurricane Harvey’s devastating aftermath, and we are weeks if not months away from a full accounting of its toll on the fourth largest city in the United States. And while a definitive account of its epic proportions will have to wait, we can at least begin to make some preliminary assessments.

In this post we will discuss how Harvey compares to other major flood storms in US history, and also how it stacks up to the region’s previous flooding event of record, Tropical Storm Allison. (Spoiler alert: Allison had a good run, but Harvey has forever dethroned her).

The Texas state climatologist, John Nielsen-Gammon, has been closely tracking Harvey and its attendant flooding. To gauge the overall impact of a rain event, he uses a metric that defines a target zone of 20,000 square miles (about the size of West Virginia, or about 30 times the size of the city of Houston), and then measures the rainfall rate over a 120-hour period in comparison to the discharge rate of the Mississippi River. Here are the top 10 Gulf Coast flood events, as measured in “Mississippi River discharges” over that time:

Note that the initial estimate for Harvey may be too low. As of Monday morning, Neilsen-Gammon’s hand estimate for Harvey to date was 3.1, but more heavy rains were falling in the target area and a full five days not reached. Already, for 72 hours, Nielsen-Gammon said Harvey is the greatest event over this shorter time scale.

Under this metric of rainfall over a large area, then, Harvey will very likely produce the greatest total amount of rainfall in the United States from any single storm, at least during the last 120 years. (the Gulf coast is by far the most susceptible US regions to such events due to its proximity to the warm, humid body of tropical water).

Tropical Storm Allison remains the costliest US tropical storm in history, with $5 billion in damages. Harvey won’t change that, because it came ashore as a hurricane. However, in all other respects Harvey will easily eclipse Allison. Consider the following, five-day rain totals from Allison for Harris County. 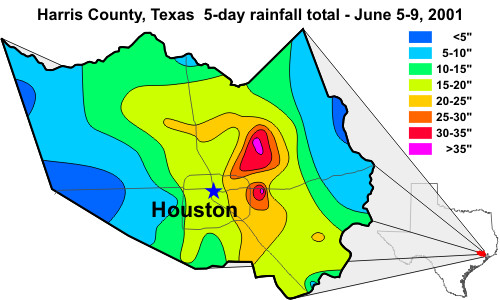 Note that only a small area of the county received 25 inches or more rainfall during the five-day period (shown in red and purple). According to Rice University’s Phil Bedient, who spent the better part of a decade studying Allison, the rains were spread out over the period. For example, one day Conroe might get hammered, then Sugar Land, and so on. Even during the final night, the area of heaviest rains—about 15 inches, in total—was confined to the area inside Loop 610, with the higher totals near downtown and the Texas Medical Center.

The principal difference between Allison and Harvey is that the rains have fallen across the entire county. According to Jeff Lindner, with the Harris County Flood Control District, the county has averaged 23.7 inches of rainfall during just the last 48 hours, a two-day period compared the the Allison map above. And virtually every part of Harris County has gotten at least 25 inches during the last three days. 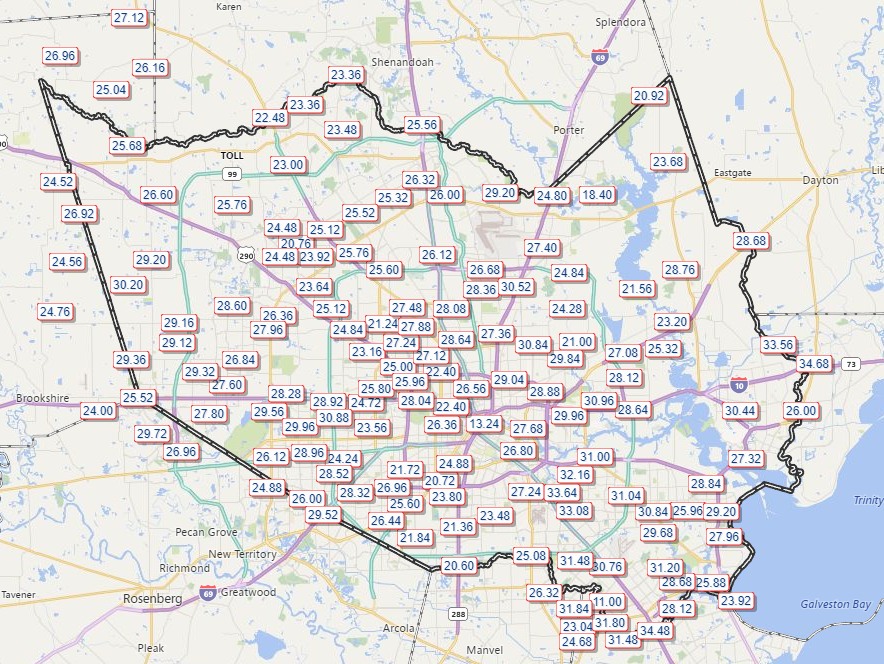 This map is really rather astounding when you compare county-wide accumulations of 25 inches over just three days to the small area of 25-inch accumulations during Allison spread over five days.

The other factor to consider when trying to ballpark damages is the fact that the Harris County population in 2001 was about 3.5 million, and it has now grown to 4.5 million (or more), with an exceptional amount of development on the west and southeast sides of the region, which were among the hardest hit areas. “The damage estimates are going to be astronomical,” Bedient said. Undoubtedly.

Posted at 1:00pm CT on Monday by Eric