Good morning. After another day or so of quiet weather we’re going to have to face another period of potentially heavy rain on Friday night and Saturday.

Houston will see warm temperatures on Thursday, but how warm depends up the extent of cloud cover. If we’re mostly sunny temperatures could rise into the upper 80s, to near 90 degrees. If there are some clouds, or a scattered shower near where you live, temperatures will probably remain in the mid-80s. In either case, it will be a warm, almost-summer-like day.

After a slight chance of showers and thunderstorms developing to the north of Houston on Thursday night and Friday morning, we’ll see better rain chances later in the day. It is possible we’ll see some thunderstorms move in from the west later on Friday, during the evening hours. For now the west-northwest part of the metro area lies under a “slight” chance of severe weather (damaging winds, hail and possibly a tornado) on Friday and Friday night. 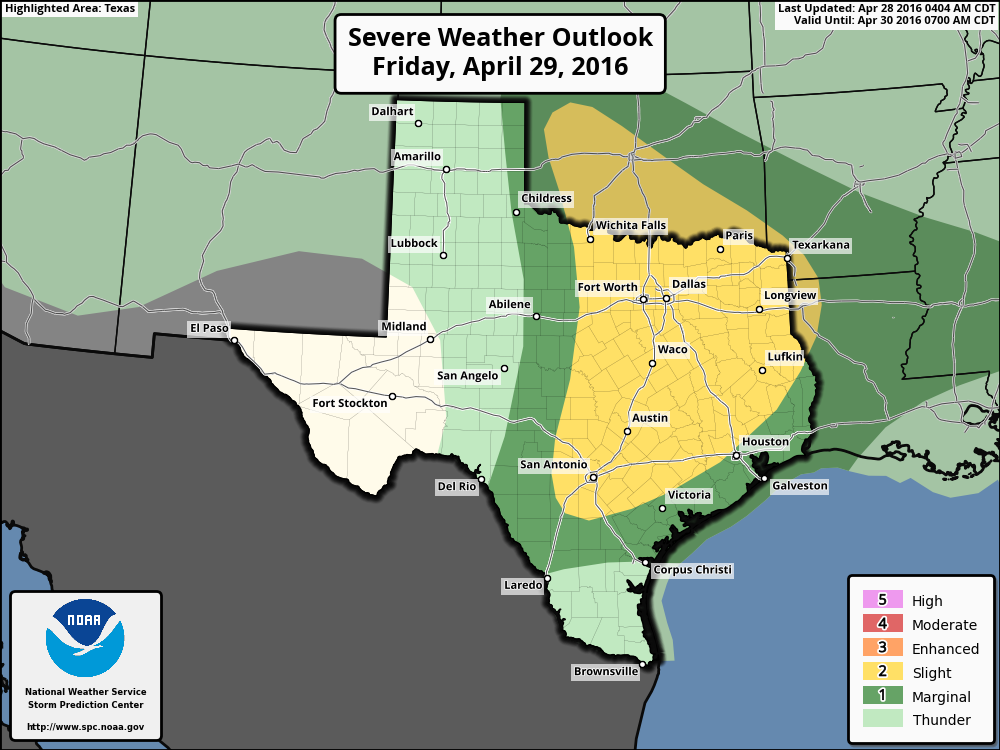 I’m still expecting the best chances for heavy rain to occur on Friday night and Saturday. The combination of an approaching front to provide lift, slow motion and high atmospheric moisture levels will once again provide conditions favorable for intense rain showers. At this time we cannot say whether that will occur for sure, because sometimes these storms “hit,” and sometimes they “miss.” That is the nature of things. In this case I’d lean more toward a hit, with widespread rainfall totals of perhaps 2 to 4 inches (at best that’s an educated guess), and higher isolated totals. Some parts of southeast Texas may well see in excess of 5 inches of rain, which would create localized flooding at the very least, but it is not clear at this time where that will be. In any case, we’ll have to watch this system and its potential for additional flooding closely, and any outdoor activities on Friday night through Saturday night should involve checking a forecast before venturing out.

Some rain showers will be possible on Sunday, but the storm system should be moving along by then. We should see partly cloudy skies and highs in the mid-80s.

Rain chances will linger through Tuesday or so, when a cool front should arrive, making for clearer and slightly cooler weather for the second half of the week.

Posted at 6:55am CT on Thursday