After a clear and cold weekend, our concerns once again turn to the possibility of a winter storm in Houston—the third time we’ve worried about this kind of thing during the winter of 2017-2018. Fortunately, I’m also pretty confident this is the last time we’ll have to worry about this for this winter.

Fortunately, the inclement weather will hold off for today, allowing for pretty nice conditions across the region for the celebration of MLK Day. We can expect to see high temperatures in the low 60s, with partly sunny skies. Some scattered showers are possible later this afternoon and evening, as temperatures fall to around 50 degrees.

Everything changes on Tuesday as a strong cold front blows into Houston between midnight Monday, and sunrise on Tuesday. Light rain should follow behind this front. We’re not concerned about accumulations, with only a tenth or two of an inch of precipitation for most areas. But we are definitely concerned about the potential for rain turning into a wintry mix north and west of Houston on Tuesday morning (i.e. in the Brazos Valley and the Piney Woods regions), and moving southward into the Houston area later on Tuesday. 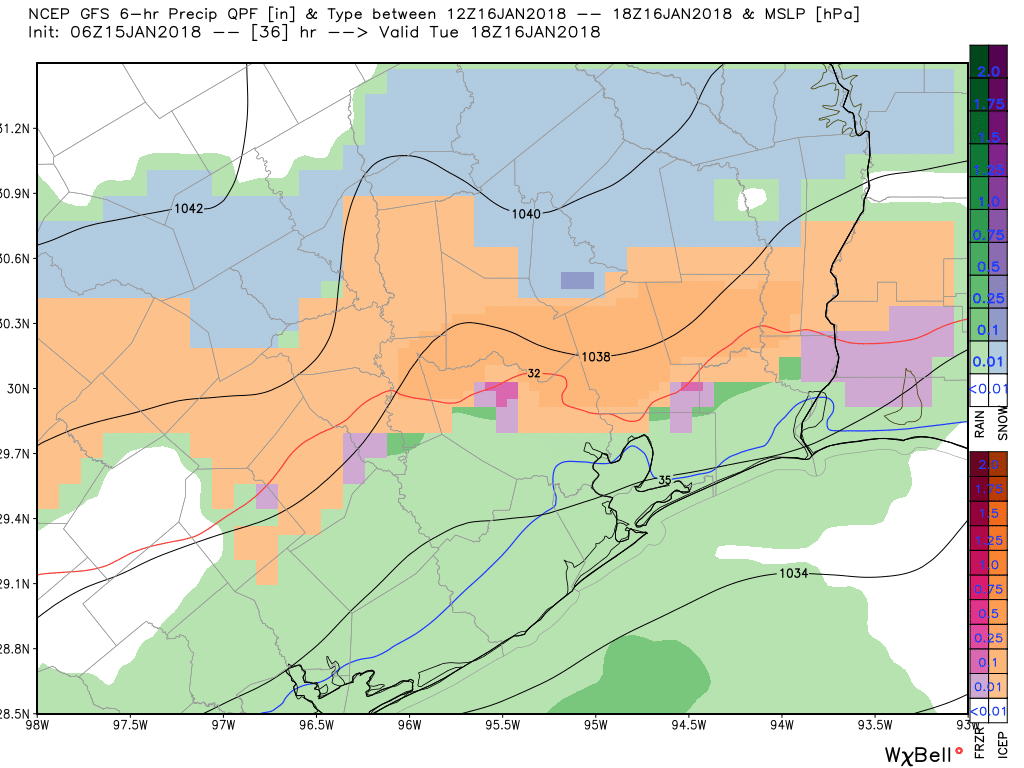 GFS model for precipitation from 6am to noon Tuesday. Rain for southern half of Houston, with mostly sleet (ice pellets) to the north. (Weather Bell)

Expect temperatures to fall throughout the day on Tuesday as very cold air advects into the region behind the front. For Houston, we’re primarily concerned about precipitation that lingers into the afternoon and evening on Tuesday, when temperatures fall below freezing. Although the precipitation (rain, sleet, snow?) will be light, you’re going to want to check the weather and road conditions before venturing out on Tuesday evening or Wednesday morning. Overall I’m not too concerned as something like light sleet shouldn’t cause major problems. But we’re nonetheless watching this closely because of its trouble-making potential, and we’ll keep you updated. A winter weather advisory is in effect from 3am Tuesday until 6am Wednesday for the entire metro area. 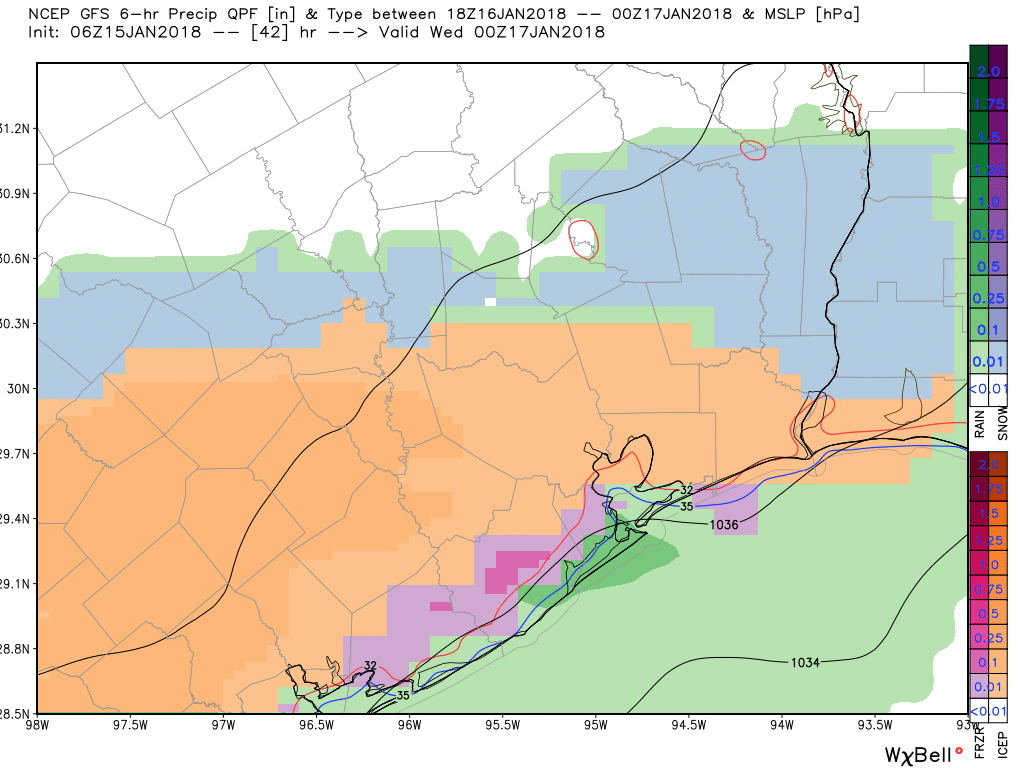 GFS model for precipitation from noon to 6pm Tuesday shows sleet over most of Houston, with snow up north. (Weather Bell)

The other big story for Tuesday night is low temperatures. Right now I expect we’ll see low 20s for inland areas, mid-20s for central parts of the Houston area, and upper-20s for the coast. Obviously you should take similar precautions as to what you did for the cold snap right at the beginning of the new year.

The precipitation ends on Tuesday, so by Wednesday morning roads should be dry. It will be a sunny, but cold day, with highs in the low 40s. A light freeze is likely across most of Houston on Wednesday night, except for immediately along the coast.

The work week will end on a warming trend, with cloudy days and a slight chance of rain. Highs will be in the mid-40s on Thursday, and about 60 degrees on Friday.

At this point Saturday has the chance to be a pretty nice day, with a high of around 70 degrees, and a solid chance at partly to mostly sunny skies. Sunday may not be as nice, as rain showers accompany or move ahead of the next cold front, and crimp any outdoor activities.

Speaking of the front, it won’t be as strong as what we’ve experienced lately. I expect highs next week to mostly be in he mid-60s, with lows in the 40s or low 50s.