The weather pattern over Houston is making up for months and months of wet, dreary weather since last fall. As Eric alluded to yesterday, we’re going to end up below normal on rainfall for the month of March. I’ll take it one step further: Since late January, we have been exceedingly dry. 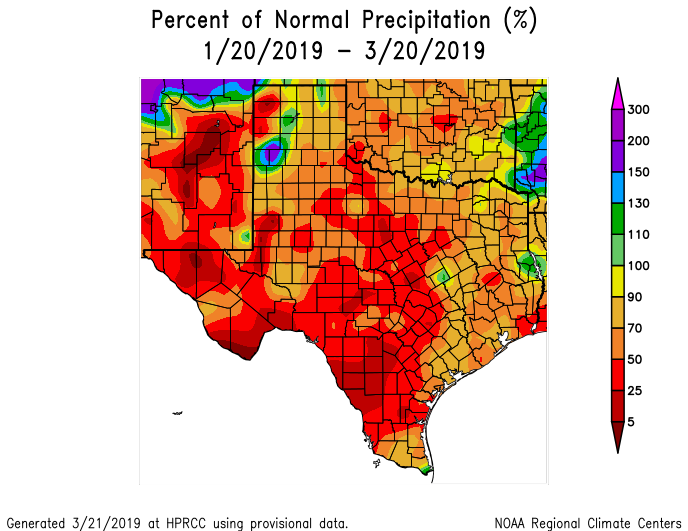 Rainfall since late January has been no better than 70 percent of what is normal over most of the area. (High Plains Regional Climate Center)

For Harris County, we have only averaged about 70 percent of what is normal over the last 60 days. Go a bit west of Houston, and parts of Central Texas from San Antonio through Austin are averaging about 50 percent or less of normal. Thanks to weeks and months of wet weather prior to the last 45-60 days, we are not in drought, nor are we even abnormally dry according to the latest Drought Monitor report. With an El Niño event ongoing and likely to continue, it would be surprising for this drier weather to continue (El Niño springs are usually fairly wet in Texas). But this will be a story to watch over the next few weeks.

Unfortunately, our nicest week of the year so far has been marred by varying and unrelated forms of air quality issues. It has either been the situation in Deer Park with the ITC Terminal fire (which at least this morning seems under control), obscenely high levels of pollen, smoke from numerous agricultural fires across the Southeast leading to increased particulate matter, or as in today, high levels of ozone. 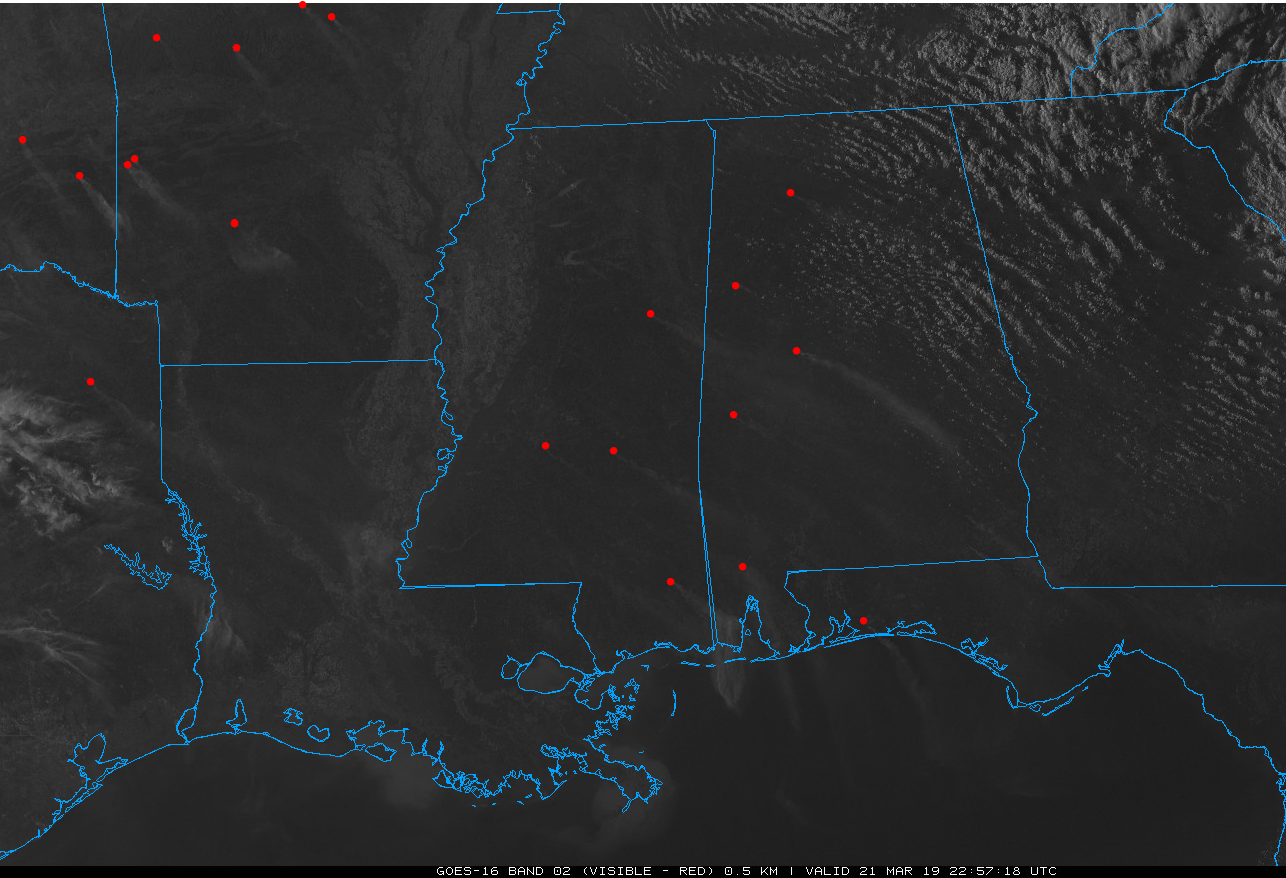 Visible satellite imagery from late Thursday shows numerous agricultural fires in the Southeast. The red dots represent clearly visible ones; there are likely others. (College of DuPage)

The Texas Commission on Environmental Quality has declared today an ozone action day, meaning we should see high levels of ozone and generally poor air quality. These types of days aren’t necessarily infrequent in Houston, but it’s just compounding our issues here of late. But, hey, other than that, it should be great today! Expect wall to wall sunshine with some passing high clouds today. We should manage upper-70s to around 80° in some spots.

In terms of rain chances, they should be low but they will not be zero. Simply because of all the moisture coming ashore, those rain chances will increase. But we really lack a good “trigger” to get showers and storms going, so I would suspect that whatever forms will generally be light and spotty in nature. In fact, I would say most of us will remain dry this weekend. That said, a few places could receive a shower or storm, likely turning your neighborhood streets yellow with the heaping amounts of pollen covering everything in sight. 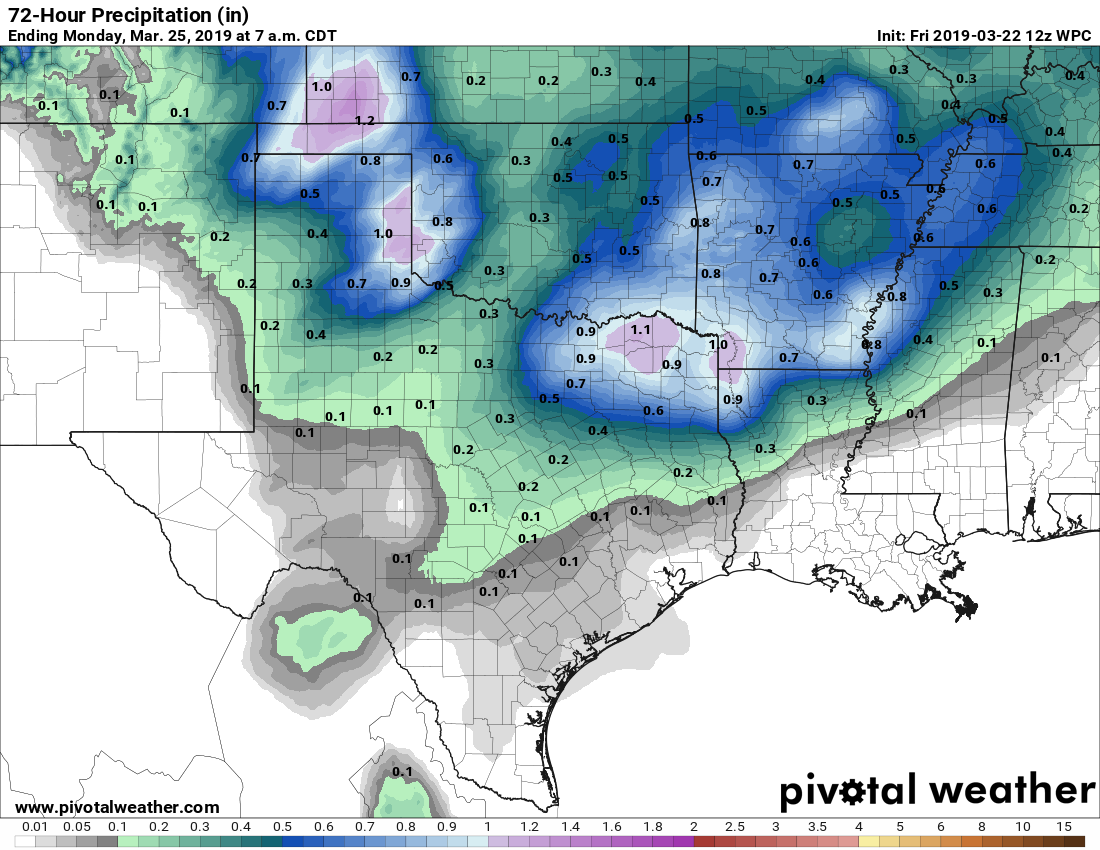 Rainfall this weekend will be on the low-end of the spectrum. (NWS via Pivotal Weather)

Anyway, I might say Saturday has a slightly better chance than Sunday for a passing shower. Either way, look for high temperatures to top off at 75 to 80° this weekend.

Monday should see an extension of the weekend weather with low-end shower chances and warm, humid weather. We should start the week in the mid-60s and finish Monday around 80° or so. A cold front will cross the region Monday night or early Tuesday, which should cool us just a little, but it will take a nice chunk out of the humidity. That sets up beautiful weather Tuesday and Wednesday, with lows in the 50s and highs in the 70s. Humidity and cloud cover should return for the latter part of the week, and our next rain chance will arrive by Friday or next weekend.