Let’s face it. We’ve gotten off very, very easy this spring in most of Southeast Texas. It’s been pleasant very often lately, despite a couple days of heat and humidity mixed in. So as we continue on another nice, lengthy stretch of fair weather, let’s quickly review where we are right now.

Rainfall amounts haven’t been at all like the last two springs. It also hasn’t been terribly dry either. In fact, precipitation over the last 60 days is averaging just a little above normal in most of the Houston area. 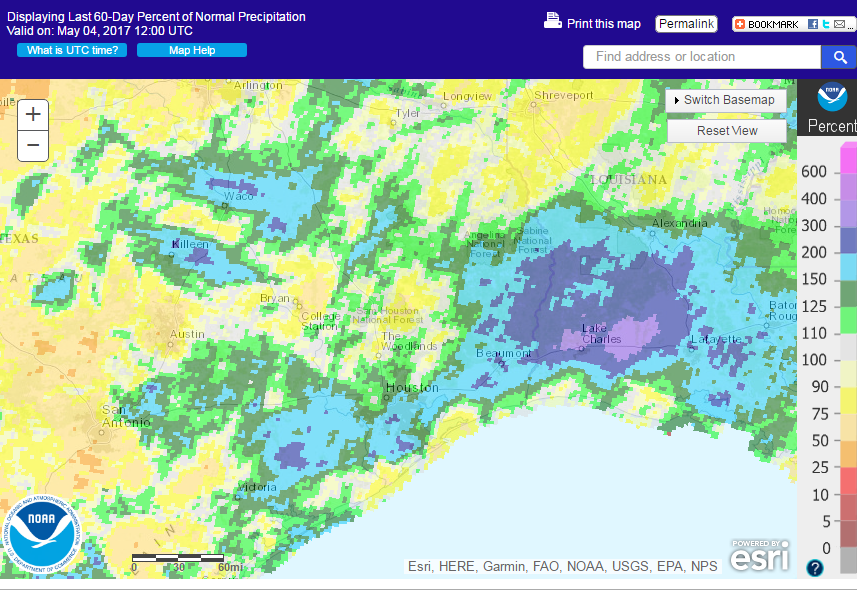 Percent of normal precipitation for the 60 day period ending yesterday shows most of the region in pretty good shape. (NWS/NOAA)

It’s a bit drier than normal in patches around the area also, but we’re by no means in drought. Even despite recent dryness near and west of San Antonio, those areas aren’t really in drought either.

And on top of this, temperatures have been sublime at times. Yes, we’ve already hit 90° twice, but let’s be frank: We’ve had multiple days like yesterday and today, and they’ve been amazing. The last two weeks have been especially lovely. 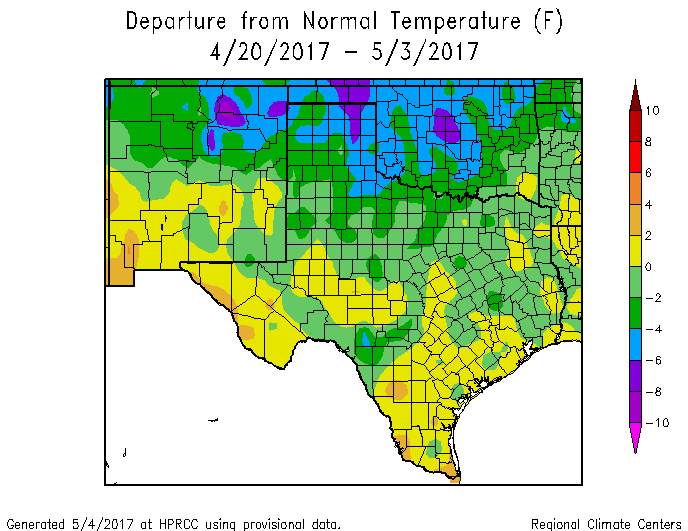 Average temperatures the last couple weeks have not been too far off normal, despite a couple days in the 90s. (High Plains Regional Climate Center)

So for most of late April and now early May, rather than drifting into our miserable, stable summer of high humidity and plenty of heat, we’ve only had tastes of it.

This past winter was definitely a warm one that set records in many spots across the country, but some of the most amazing warmth has come close to home—in Galveston.

For Texas and Louisiana, Winter 2016-17 was the warmest on record (back 122 years), but it was also near the top of the list in most of the eastern and central US. (NOAA)

(Space City Weather is sponsored this month by The Mole, a Jonathon Price novel.) END_OF_DOCUMENT_TOKEN_TO_BE_REPLACED

It’s still a bit early in the game, but we wanted to bring you up to speed on a couple tropical disturbances in the Atlantic that are driving “chatter” in social media and elsewhere about how they may or may not impact Texas and elsewhere. Let’s dig in.

Before a tropical disturbance becomes a depression or named storm, for the purposes of running models and collecting data, the National Hurricane Center uses the designation “Invest” (90-99) to describe a system. Basically, it just means an area they’re investigating for possible future development. Invests are common and have a sequential numbering scheme that repeats through the season.

With that in mind, we have two “invests” out there. The first one is 96L, a system about 400-500 miles southwest of the Cape Verde Islands. It’s not terribly well organized, but it has a slight chance to develop over the next couple days.

Reliable weather models are mostly unenthused with the future prospects of Invest 96L. I haven’t seen any reason to think this will develop into much of anything, and its long term prospects likely do not include the Gulf, so no worries here for us. END_OF_DOCUMENT_TOKEN_TO_BE_REPLACED

As we go into the weekend, the heat will begin to turn back up over Texas, as more standard summer returns. One interesting statistical nugget from the other day: Wednesday was the first time since June 12th that we had not hit 90 degrees in Houston, ending a 44 day streak that ranks tied for 15th longest 90+ streak all-time with 1902, 1958, and 1988. The longest recent streak of 90+ that we’ve seen occurred last year, 49 straight days from July 2 through August 19. The longest ever? 81 days in a row in 1890. I can’t even imagine…

After another noisy afternoon yesterday, especially north of I-10, we’ll probably see some scattered storms around the region again today. That said, I don’t think storms will be as widespread as the last few days. Some heavy rain will be possible however again in a few spots, but those will be the exception, not the rule. We poked back into the 90s Thursday, and I suspect we’ll do it again today, probably closer to the mid 90s, typical for mid-summer.

Weather models imply we should at least see a few showers or storms by this afternoon. (Weather Bell)