Posted by Braniff Davis at 9:10 AM

Reminder: Braniff Davis, who is finishing a master’s degree in meteorology from San Jose State University, has joined Space City Weather as a contributor. He will be moving to Houston soon, and he will help explain the why’s of Houston’s weather, and will also be tracking air quality and related issues for the site. Please welcome him and feel free to give him a follow on Twitter!

While people inside the loop didn’t get to experience Thursday’s deluge, it was truly unprecedented–especially for the weather station in Brenham, which measured an astounding 16.62 inches of rain: 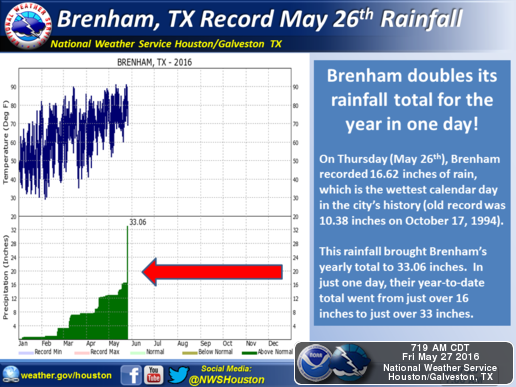 To give you an idea of how much rain that is, consider this: since July 1, 2015, San Jose State University, where I currently work, has recorded 16.02 inches of rain–in an El Niño year!

Fast forward 24 hours later, and the region felt like Bill Murray in Groundhog Day. Another system, though faster moving and not as intense, flooded the northern metro region once again on Friday. What caused these intense, long-lasting storms?

The region experienced so much rain thanks to what’s called a backbuilding mesoscale convective system. Below is a GOES-13 satellite infrared video of Thursday’s system, from Dan Lindsey:

Let’s break down the science behind these massive storm systems. A mesoscale convective system (MCS) is a large, organized, slow moving group of thunderstorms. These storms are largely seasonal–for Texas, most MCS events occur in May & June. Inside the MCS, several thunderstorms are developing and dissipating at the same time. Tropical, moist air, moving northward from the Gulf in a low-level jet stream, provides the energy the system needs to survive and persist for several hours. Eventually, the system dies down, usually overnight–but it can leave behind moisture and atmospheric vorticity (essentially areas of “spin” in the atmosphere), which can actually cause future thunderstorm outbreaks if the atmosphere remains unstable. This is why, on Friday, another MCS flooded the region:

The backbuilding of the MCS development is the reason why these storms appear to stop moving, or move very slowly. Backbuilding occurs when thunderstorms begin to form behind other thunderstorms, upstream of the storm’s motion.  It is often caused by the outflow boundary, or gust front, providing the lift needed to create more convection. This also acts to slow the forward movement of the MCS. You can see this backbuilding in Thursday night’s radar loop:

A line of thunderstorms continually builds “backwards” from east to west, between The Woodlands and Austin, creating the appearance of a stationary system. Compare this to the thunderstorm approaching from Kerrville (labeled ERV on the left side of the loop) in the more typical west to east pattern. This constant backbuilding leading to repeated rounds of thunderstorms causes “extreme” flash floods associated with MCS events.

In an eerie coincidence, one year ago this past week, the Memorial Day floods were caused by a larger, longer lasting, mesoscale convective system. As we are still in the midst of the MCS “season”, it’s a good idea to stay extra plugged into the forecast when thunderstorms are possible.

In Houston and along the Gulf Coast, there’s no definitive “start” to summer. As a meteorologist however, I usually signify the true start to summer here as being when you have to include a chance of thunderstorms in the forecast almost out of pure obligation. Maybe you get one or two and the majority of the region stays dry (though, hey, last night was a little wild, right?), but you are obligated to include that chance. I feel like that really started yesterday. You may have your own definitions on when summer truly begins, but I am arbitrarily declaring summer in session. Away we go…

You may wake up to some fog south of Houston, but the radar is mostly quiet this morning. A weak cold front will essentially wash itself out over the area today. It’s basically along or just south of I-10 this morning, and it probably won’t get much further.

The models generally agree that the best chance of storms today will be south and west of Houston. That doesn’t mean we couldn’t see one pop up anywhere in the region today, but the odds are highest toward Wharton, or El Campo. We will heat up enough to develop a sea breeze off the Gulf, so that may also act to focus some pop up storms elsewhere in the region. Otherwise, hot and humid. We fell just short of 90 yesterday, and I think we’ll fall just short again today, but it’s going to be close. Upper 80s to 90ish inland today, but if you get a cooling shower, it’ll drop into the 70s for a time.

Another weak cold front will try, but fail to get through the area. The first half of the day looks good, but as that front approaches, we could see showers and storms kick off. Unlike Friday, I think the best chances will be north and west of Houston during the afternoon, perhaps closer in during the evening. So if you live in Brenham, Conroe, or Livingston, your chances are higher tomorrow afternoon. In Houston, if you’re planning to check out the Dynamo/Real Salt Lake match or perhaps Rice baseball against Florida Atlantic, keep the threat for evening storms in mind. If we can hold the rain off enough, there may be an outside shot at 90 degrees Saturday, but it won’t matter much either way: Continued hot and humid. 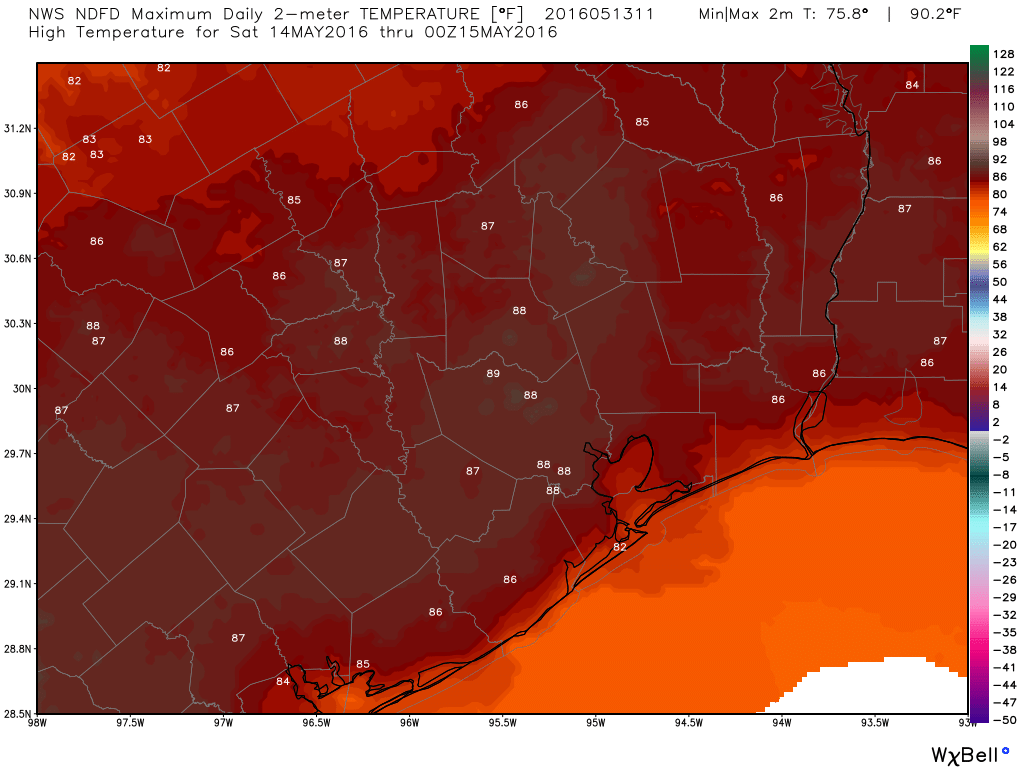 High temps for Saturday may make another attempt at 90°. (Weather Bell)

SUNDAY INTO NEXT WEEK

Sunday will be a bit tricky. Saturday evening’s storms will form along yet another cold front trying to drop into the region. That will be weak, but it could act as a focal point for some hit or miss storms during the daytime Sunday. If I absolutely had to put a number on it, I’d say about a 20-30% chance of a daytime shower or storm basically anywhere in the region. 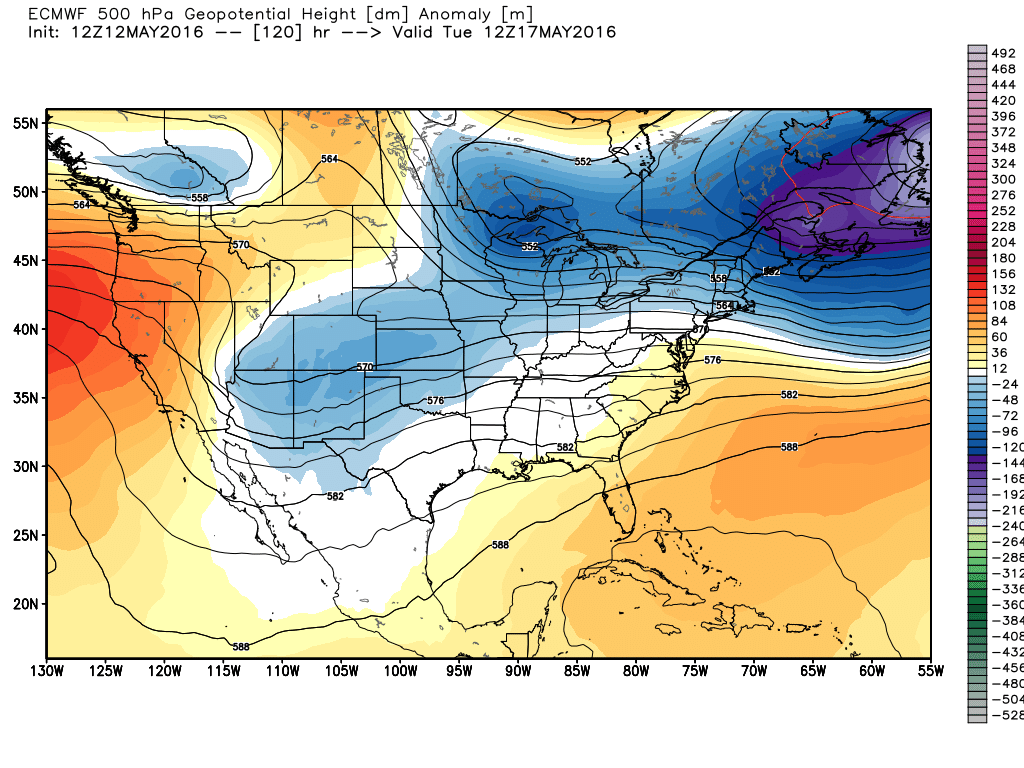 Upper level maps show an anomalously cool pattern next week across the US. (Weather Bell)

A rather strong upper level weather pattern for mid-May will pester the Eastern 2/3 of the US next week. This means abnormally strong cold fronts can get abnormally far south. You see where this is going.

Monday is low confidence. The European model has been aggressively showing heavy rain and thunderstorms Monday, whereas the GFS has been sort of agnostic about the whole thing and just shows some scattered showers or storms (though it did trend a little stormier overnight). Right now, I’d split the difference and say a good chance of scattered showers or storms, possibly coming from a large complex of storms that moves from Central Texas late Sunday night. Honestly, details are very much TBD at this point. We’ll keep an eye on this for you over the weekend, and we’ll probably update you on Saturday afternoon or Sunday morning.

Oddly, the forecast for Wednesday may actually carry slightly higher confidence than Monday. A cold front will likely approach and potentially clear the region. A band of heavy rain and thunder should accompany this one. If we’re lucky, we may get a day or two behind that front with slightly lower humidity to round out next week. Fingers crossed. If the front stalls, then forget that, and we’ll add more thunderstorm chances late next week.

Amount of rain needed in one hour to trigger flash flooding. (NOAA/NWS)

In terms of severe weather and flooding: As is always the case in May with storms in Texas, both are possible. In terms of severe weather, there isn’t anything alarming for any day, and the main threats would be large hail and strong, damaging winds. In terms of flooding: We’ve had ample time since Tax Day to dry out  and can handle a fair bit of rain right now; in fact, most areas could feasibly handle 2-3″+ of rain in an hour before flash flooding becomes a serious issue. As we saw last night, that’s not impossible to do though, so while I’d classify a serious, widespread flooding risk as low right now, localized street flooding is likely to be an issue at times in parts of the area. It’s something we will continue to monitor, and we’ll keep you posted as we get closer and throughout!

This storm has been maddening. You have to walk a very fine line between panicking people and providing actionable information. The balance is between the weather models (screaming 5-10″ of rain), the reality that big rain events aren’t that uncommon here, and the fact that people have a recent disaster (Memorial Day 2015) fresh in mind. It makes it difficult to communicate the information effectively. I know a lot of events and even some schools have been cancelled tonight and tomorrow. And it hasn’t rained much around Houston yet today, so people have to be very confused.

The worst of this event was always supposed to be overnight tonight into tomorrow. Recall this morning, I said that most areas would see 0.5″ or less in all likelihood during the day today. Most have. 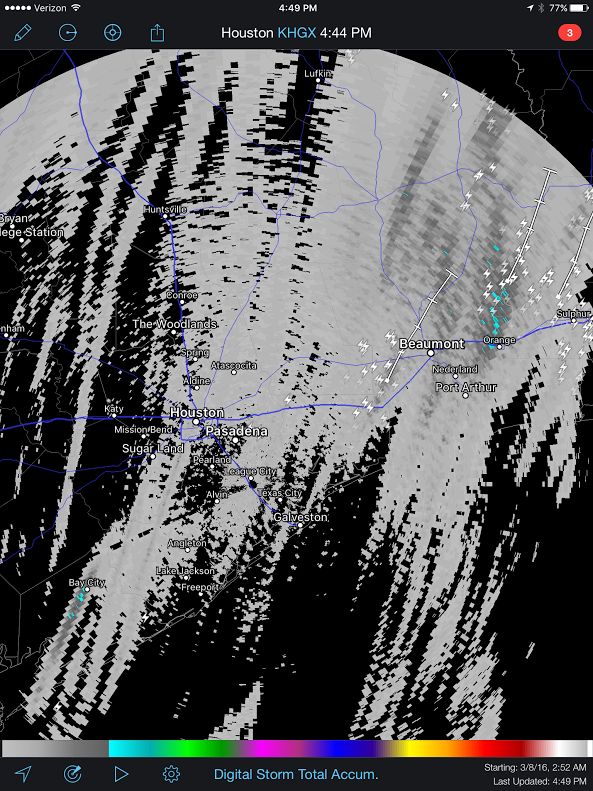 Rainfall through 4:30 PM Tuesday has been light for most. Blue specks near Bay City, Beaumont & Orange indicate 1-2″ though. (Radarscope)

The good news today has been a very distinct lack of severe weather in Southeast Texas. We’ve managed to get through without any serious issues or warnings. The best parameters for severe weather will continue to exit to our east this evening and any tornado threat overnight will likely stay closer to the Golden Triangle than in Houston. END_OF_DOCUMENT_TOKEN_TO_BE_REPLACED

Good morning. It’s going to be a busy day across Southeast Texas, especially as we get deeper into it. I’ll update the Facebook page this afternoon if conditions warrant, and look for another post here this evening, once we get just a little more clarity on how things tonight into Wednesday will unfold.

There should be no serious issues this morning. A few showers will be around, but severe weather should be absent from our area. A few stronger storms could get going east of I-45 by Midday however.

Houston will be in an interesting spot today. The atmosphere is capped at present (meaning there’s basically a “lid” on things that will suppress storms this morning). As the day goes on, that cap will dissipate, and we’ll be able to start generating thunderstorms. What does all this mean in English? It may take some coaxing to get storms going today. That said, once they do get going, it won’t take a lot for them to become strong or severe, so you’ll want to stay on guard today. 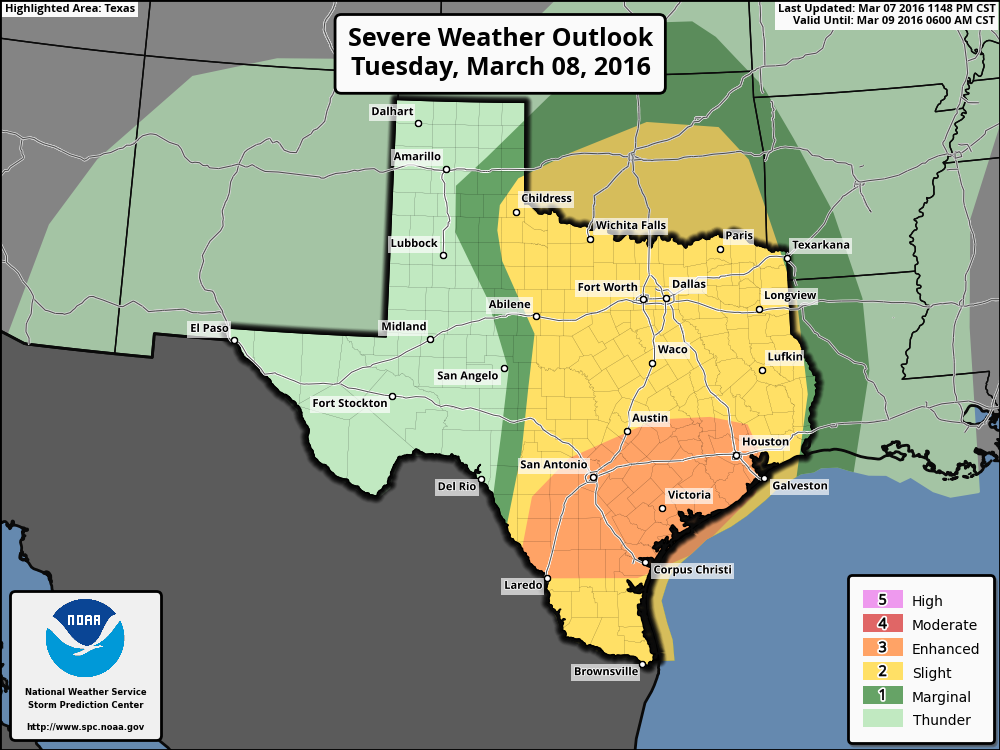 So bottom line: Scattered showers and hit/miss thunderstorms today. Rain totals should be manageable outside of the heaviest activity. Most folks should see 0.5″ or less during the daytime today, with isolated higher totals in any more stubborn storms (where up to 2″ or so will be possible). END_OF_DOCUMENT_TOKEN_TO_BE_REPLACED