After mostly nice weather this week, we’re heading into the weekend warmer, but with a cold front on the way. That leads to unsettled weather. Let’s discuss.

I don’t think we have any real issues today, but it wouldn’t be the biggest shocker in the world if a handful of us see a shower this morning as a weak disturbance pushes through. The best chances will be north of Houston, but ultimately, I do think most of the area will stay rather dry today. Onshore winds will continue to pump up temperatures, humidity, and provide a good deal of clouds. Expect us to reach about 80 degrees this afternoon.

Tomorrow should behave a lot like today early on. Expect clouds, warm temps, humidity, and a chance of a shower through late morning. It gets trickier in the afternoon. The cold front is going to arrive in Houston sometime around mid- to late-afternoon. Because of that, expect a “dress for two seasons” day on Saturday. 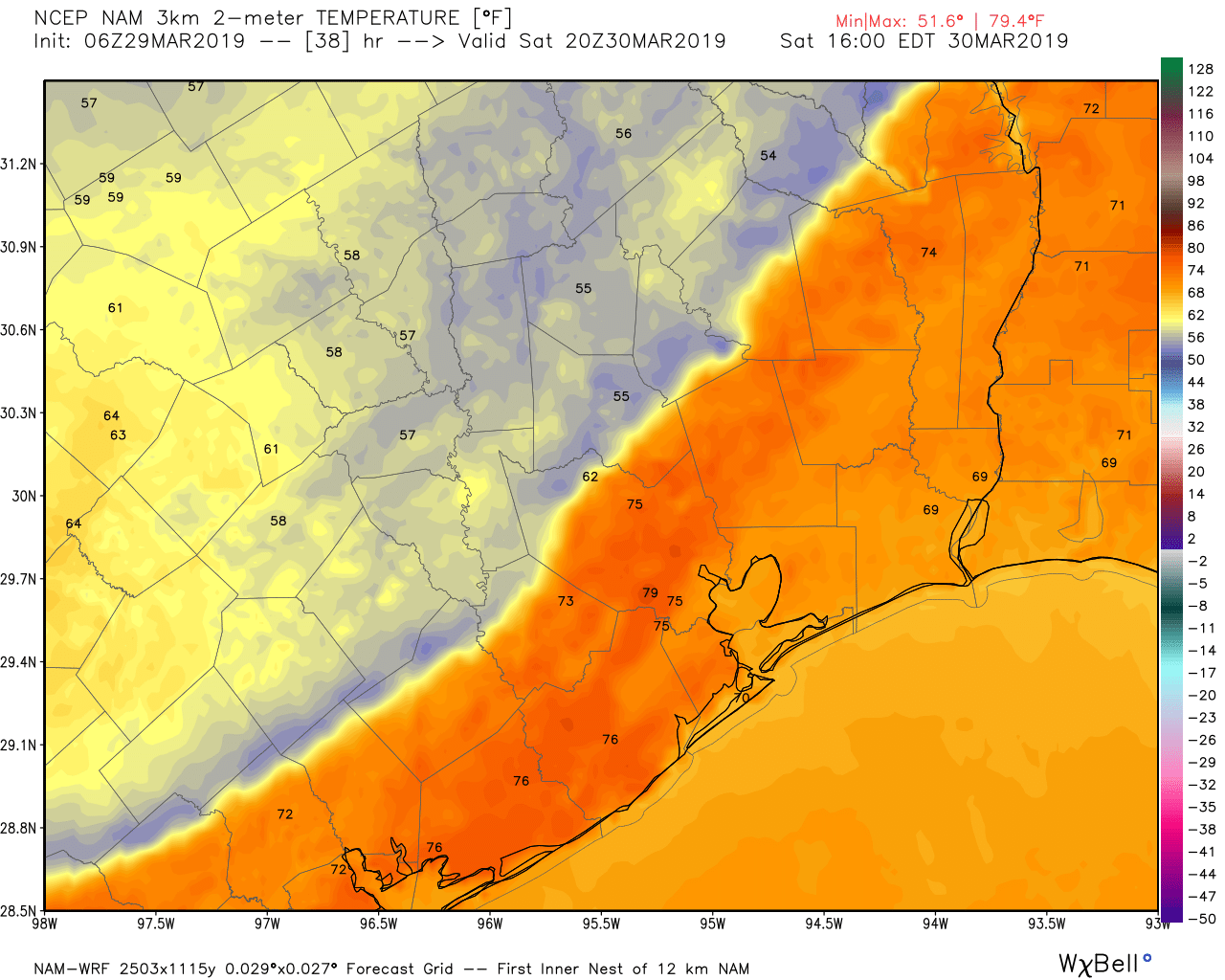 This is the NAM model depiction of temperatures at 3 PM on Saturday. This would have the southeastern half of the region near 80 degrees, while the northwestern half has dropped into the 60s and even some 50s. Dress for two seasons tomorrow. (Weather Bell)

The morning will be warm and humid, and at some point in the afternoon, it’s going to get chilly. We may reach 70-75° in the far northern reaches of the area, call it Huntsville or College Station. Once the front passes, temperatures will drop into the 60s and 50s. In Houston itself, we will probably hit 75-80 degrees, with temperatures falling into the 60s after 3-4 PM. South of Houston should get to about 80 degrees away from the immediate coast, and the front will arrive in the evening, allowing temperatures to join the rest of the region in the 60s or 50s.

For everyone, expect just a few showers as the front moves through, but the temperature drop will be the hallmark of this frontal passage.

This period should be the worst of the next several days. While the front itself won’t pack too much punch, behind the front, we will be in a favorable environment for scattered showers and thunderstorms. Sunday has looked miserable or heavenly (depending on your perspective) for a couple days. Today, it doesn’t look quite as rainy in Houston at least, but unfortunately the chance of showers and maybe a thunderstorm will exist most of the day. This will be especially true south of Houston, where rain chances are higher. Expect clouds to be with us most of the day, but perhaps we can sneak some sunshine in toward evening. If we do see sun, high temperatures should end up around 60 degrees or so. Otherwise, expect upper-50s. 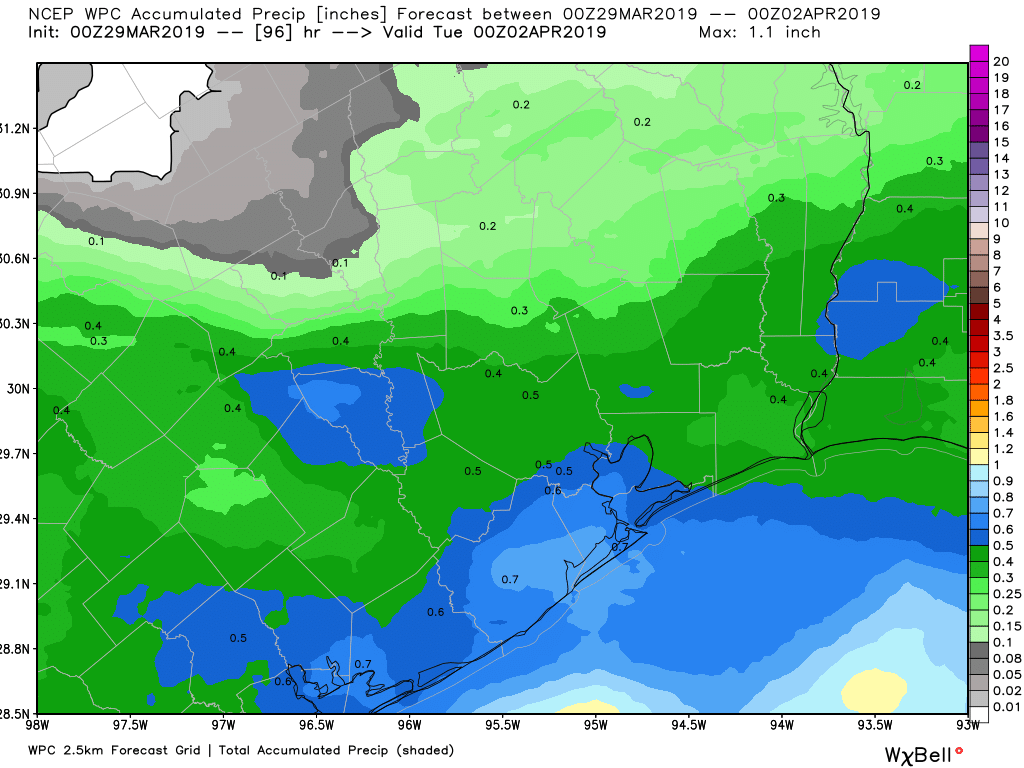 Despite a couple days worth of rain chances, most of the area will probably only see up to a half-inch of rain at most. Rain chances are better south of Houston, so perhaps those areas could see up to three-quarters of an inch by Monday evening. (NWS via Weather Bell)

Monday has been a tricky one to forecast this week, with on again/off again rain chances in weather modeling. Even today, model agreement is rather poor. But we can safely say there is a legitimate chance of rain Monday as a weak disturbance passes through. Again, we could see around 60 degrees, but if rain overperforms any, we won’t get out of the 50s on Monday.

Officially, when factoring in all the weak systems over the next few days, rain totals are expected to be about a half-inch for Houston by Monday evening. Higher amounts would be possible south of Houston. Truth be told, given the more isolated nature of the slightly heavier rains Saturday night through Monday, I would expect a potpourri of rain totals. Some places may see 0.75″ to an inch, while others, especially north of Houston, may see less than a couple tenths of an inch of rain. We could use some rain, but I don’t know that this will be the event we’re looking for.

Quiet weather should build in after Monday’s system. Tuesday looks absolutely beautiful right now, but it’s going to start rather chilly. We should see 40s, if not some upper-30s Tuesday morning, before we warm into the 60s to near 70 degrees during the afternoon. Wednesday may see some added clouds, but will otherwise be pleasant, starting in the 40s or low-50s and ending in the 70s. Humidity, cloud cover, and rain chances begin to inch back up again after Thursday or Friday.

7 thoughts on “Unsettled Sunday will cap off mediocre weekend weather”