Houston is in the midst of some lovely weather, but we do have some concerns about pollen, particularly from oak trees. Levels remain “extremely high” across the region as we’ve not had a good, hard rain in quite some time which would help knock these levels down.

There is the possibility such a rain will come this weekend, but no guarantee as the model forecasts are somewhat disjointed. And now, on to the forecast…

As winds become more southeasterly, we’re going to see some rises in humidity, and perhaps some clouds move into the skies, but high temperatures still should remain confined to the 70s. More clouds move in later Thursday evening, and nighttime temperatures likely will only fall into the 60s for most of the area.

By Friday, warmer and moister air will really be moving into the area, and we could see some wind gusts at the surface up to 25mph from the south. This will lead to a mostly cloudy day, with temperatures likely in the upper 70s, and perhaps a 20 percent chance of light rain. Winds should moderate over night, with temperatures falling into the mid-60s.

The weekend forecast, unfortunately, remains something of a mess. Saturday morning could be decent, with partly sunny skies, and any rain showers perhaps holding off until around noon. We’re offering no guarantees on that, but it seems likely that rain chances will increase during the afternoon and overnight hours. Accumulations are kind of a crapshoot at this point, but most model guidance now pegs us at about 0.5 inch or less, which is a shame because it’s been a dry March, and because of the aforementioned pollen we would like to see at least some brief, heavier showers. Highs Saturday will be in the 70s to perhaps 80 degrees. 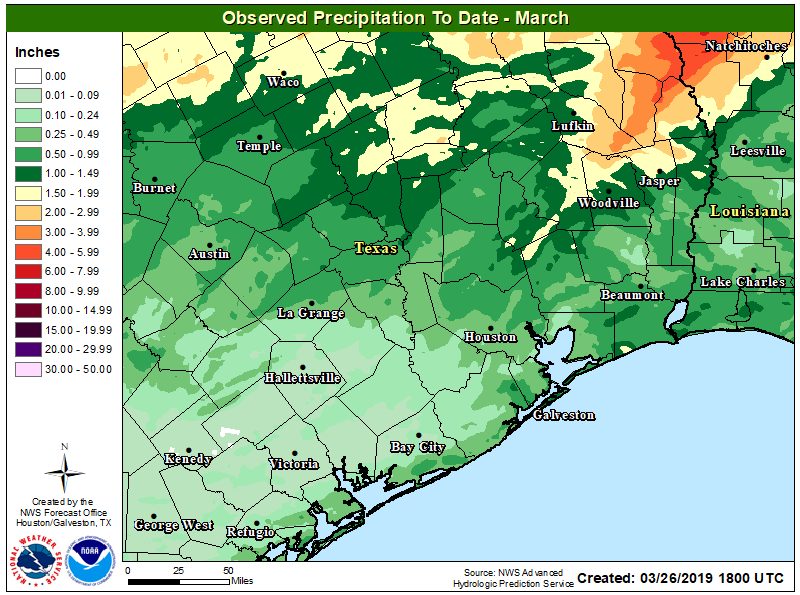 Nearly all of Houston has received less than 1″ of rain this month. We could use some this weekend. (National Weather Service)

This will not be a clean sweep front in that showers end after the front passes later on Saturday or Saturday night. Rather they will linger, as it takes awhile for dry air behind the front to move in. As a result, Sunday will be a gray and cool day, with highs of around 60 degrees, and the possibility of some light rain. It will remind y’all of January.

Sunnier skies return Monday, most likely, and we should see a few pleasant days in the 60s and 70s (nights likely in the 40s and then the 50s) before rain chances return toward the end of next week.

8 thoughts on “With pollen high, and a dry March, we could use some rain”