Houston’s got some nicer weather coming for a few days this weekend before we get a little more unsettled next week. I want to go more in depth on the potential for a pattern change starting in mid-November, so there’s a pretty detailed section on that below. Let’s jump in.

We’re starting off warm again this morning across the region. Galveston is likely to at least tie their record for warmest morning low for this date (74° in 2000). 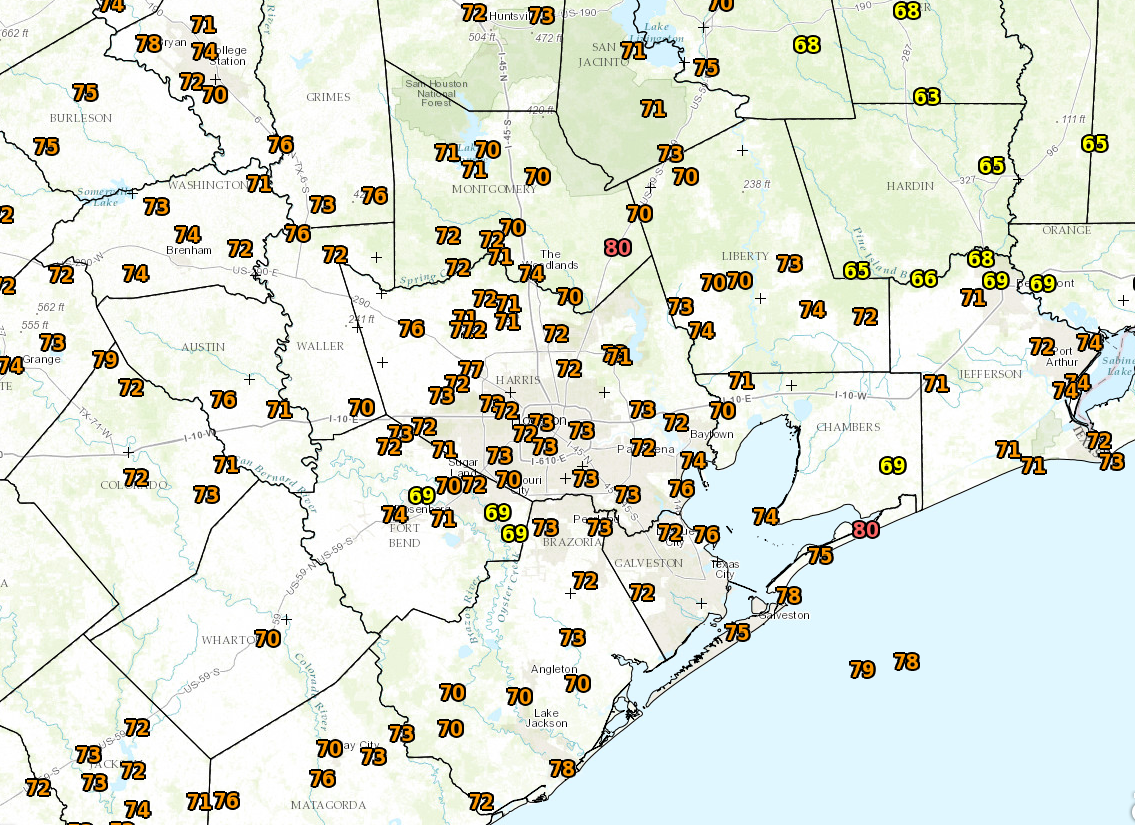 Another extremely warm morning in Southeast Texas for November. (NOAA)

Expect a mild afternoon with high temps in the low 80s. Scattered showers on Monday focused west of I-45, and then yesterday, they focused mainly between Houston and Lake Charles. Today? There is an organized line of weakening thunderstorms southeast of Dallas this morning, but I don’t quite think those will make it here. Best chance for some steadier rain though would be northwest of a Conroe to Hempstead line this morning. The air over Southeast Texas is pretty stable, so while there will likely be some isolated to scattered showers and storms this afternoon, especially north or west of the city. I’m guessing most of us will stay dry, but your best bet today is to carry an umbrella as an insurance policy, knowing there’s probably a good chance you won’t need it.

While we can’t entirely rule out a stray sprinkle or shower Friday and especially Sunday, this weekend will offer a respite from the ultra warm, humid weather we’ve had recently. The humidity will drop behind a boundary/front especially on Saturday. Instead of mid 80s for highs, we’ll be talking mid to upper 70s. Instead of upper 60s and low 70s in the morning, we’ll be talking lower to mid 60s in the city and perhaps upper 50s in the suburbs. So it won’t be “in your face pumpkin spice everything” weather, but it will feel pretty good.

Next Week and Beyond

The weather certainly gets more interesting as we go into next week and beyond. I definitely think Texas ends up in a more active weather pattern, which will mean Houston’s rain chances tick up. The details are very much TBD right now however. Let’s talk bigger picture though.

Eric’s mentioned a couple times this week about a weather pattern change to cooler weather for later in November, and indeed that appears it will happen. One need only look at what happens up toward Alaska to see this clearly. Here’s the 500 mb pattern on day 5, 10, and 15 as forecast by the GFS ensemble; this is showing what’s happening about 20,000 feet above our heads.

The upper level weather map will be changing over the next 2 weeks. (Weather Bell)

You see the “blue” over Alaska turn “red,” right? This isn’t some election season mind trick. This is a dominant Gulf of Alaska low pressure system being replaced by an upper level ridge (or colder weather over Alaska being replaced by warmer weather). You can also see a widespread amount of blue color in the Eastern US. At 20,000′ over our heads, the weather pattern is changing considerably for late November. In a normal year, we’d definitely be talking cold fronts, northers, and much colder weather. This meteorologist is a little concerned however that this isn’t a “normal” year. 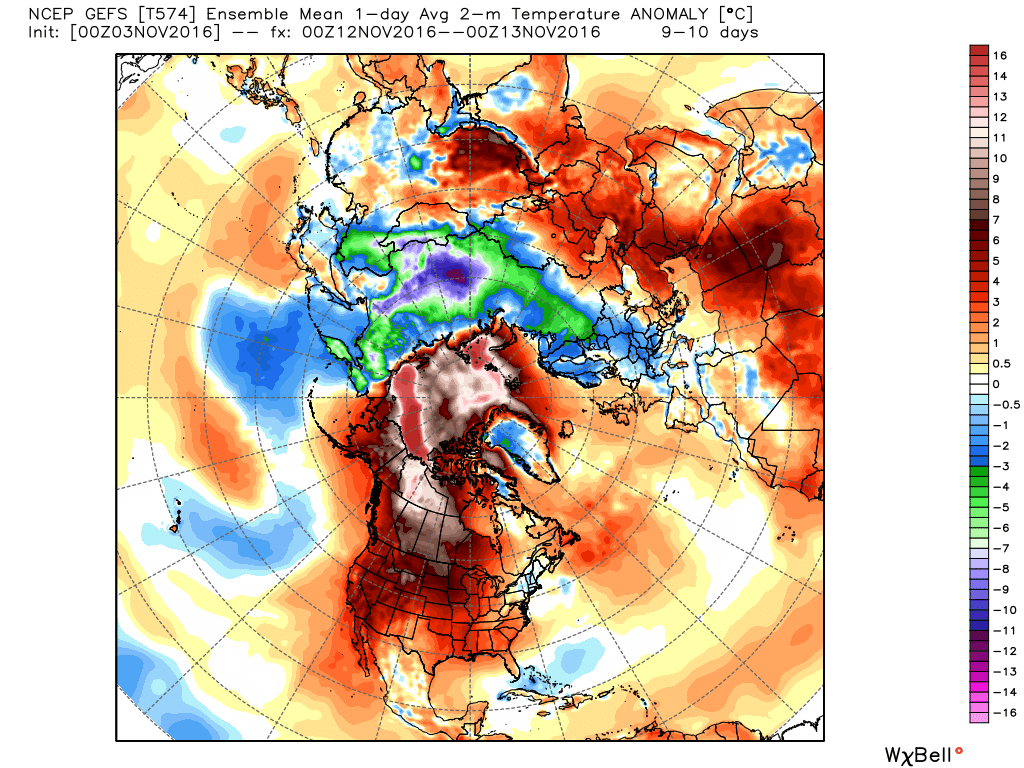 This day 10 forecast show that colder than average surface temperatures are almost nowhere to be found on the North American side of the globe. (Weather Bell)

There’s a big “problem” right now on our side of the globe. There’s just not a lot of colder than normal air anywhere. It’s all stacked up over in Eurasia. Thus, our source region for cold air (Canada and the Arctic) is actually pretty mild for November. Whenever cold air dumps south from the Arctic it naturally modifies (warms up). Well, when this cold air is 10 degrees warmer than usual, the starting point of how cold it can get is also obviously warmer. In other words, since the air we’re pulling from the north is already warmer than usual, as it comes south it won’t be “cold” like we’d expect for mid to late November. It will just be cooler than it has been lately.

Now, let me be clear here: This isn’t necessarily a bad thing in Texas. This just means that instead of cold shots, we get more temperate weather, more lower 70s and 60s for highs and more 50s and perhaps some 40s for lows. I’d venture to guess most people in America wouldn’t complain about that kind of weather in November.

But the point to be had here is that this year is somewhat interesting. The weather pattern is definitely changing beyond next week, but it’s going to be difficult to call it “cold” in Texas I think. Just cooler and perhaps just flat out nice. Here’s hoping.