Historically, this week marks the statistical peak of the Atlantic hurricane season. This year looks to live up to the hype as well. 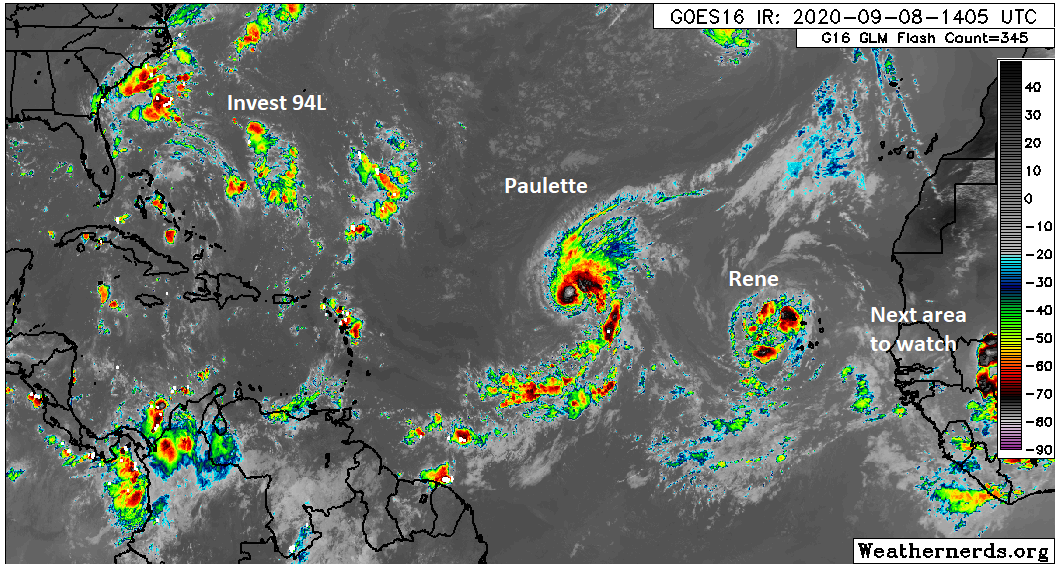 The Atlantic looks like a basin that is at the peak of its season. (Weathernerds.org)

We have two tropical storms in the Atlantic today and there are likely to be at least a couple more before next week. We don’t think that any of these systems will seriously threaten the Gulf, however it is important to keep monitoring things, particularly with respect to the third system in line.

Tropical Storms Paulette and Rene will likely be followed by a third system this week off Africa, and while none looks especially likely to make it to the Gulf, it would be wise not to write them off completely, particularly the third system, given the recent model difficulties we’ve seen.

I want to get Rene out of the way first because I think this one has the least future of note, as it relates to the U.S. 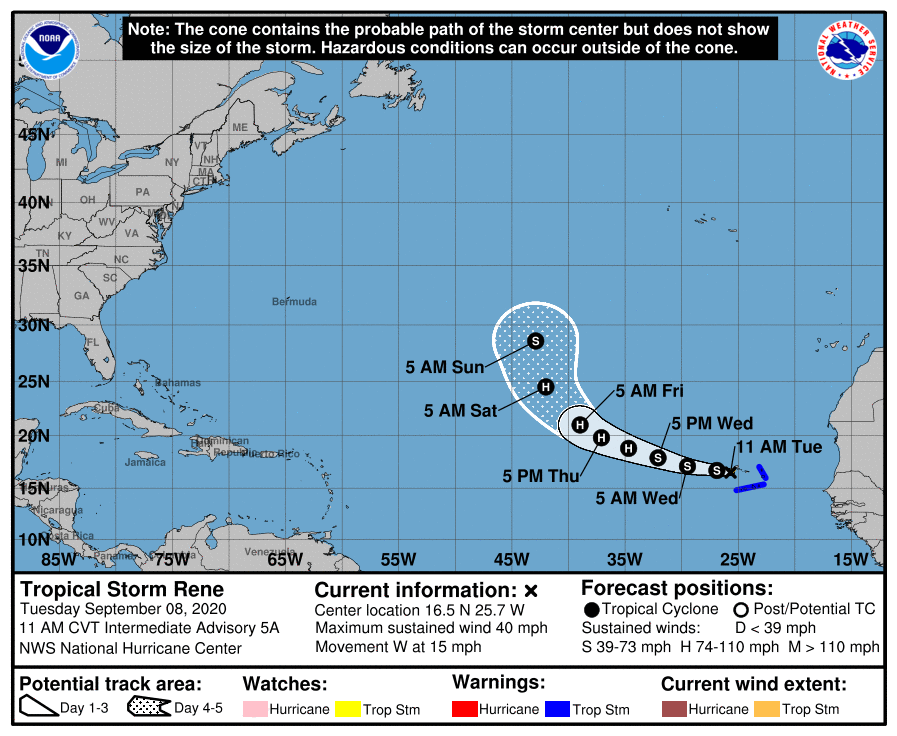 Tropical Storm Rene is likely heading out to sea, though it is expected to become a hurricane as it does so. (NOAA)

Tropical Storm Rene has 40 mph maximum sustained winds, and it is impacting the Cabo Verde Islands today. It is expected to track west and then turn northwest and north as it finds a “weakness” in the upper air pattern. The pattern does get a bit convoluted late, so Rene seems to strike me as a storm that could hang around in the open Atlantic for awhile, possibly taking a weird track as it does so. But it will not be a threat to the U.S. or Caribbean. 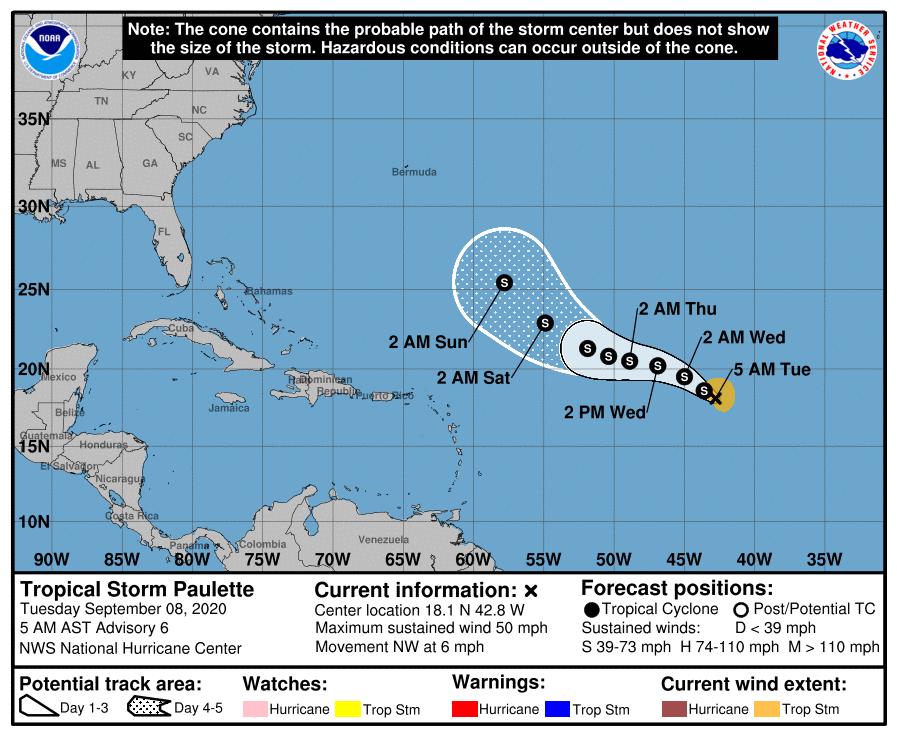 Paulette is expected to track off to the west and eventually turn north. While it should go out to sea, there is a chance it could come a bit farther west. (NOAA)

Paulette is going to be steered back to the west a bit by a building area of high pressure in the upper atmosphere. The storm will then have an opportunity to escape off to the north by the weekend as another area of high pressure off the U.S. East Coast gets eroded by a system moving through New England. I think Paulette’s track is of slightly lower confidence by this time. My doubt rests in Paulette’s intensity. With this pattern, I do wonder if Paulette’s weak intensity this weekend will allow it to escape underneath all that nonsense off the East Coast, which would allow it end up farther south and west of the forecast. In that situation, Paulette’s turn out to sea might wait to commence until it gets between the U.S. and Bermuda, rather than east of Bermuda as currently shown. While it would still likely end up out to sea, it could potentially create a bit more heartburn for folks on the East Coast. We’re about a week away from Paulette getting west of Bermuda if that were to happen, so it’s a lot of speculation. For us in the Gulf, Paulette probably poses no meaningful risk, but I’d at least keep a slight eye on this if I lived on the East Coast.

For our purposes, the system that may have the (relative) highest odds of being an issue down the road is the next system that comes off Africa. Models seem to be in good agreement that this disturbance is going to emerge and likely become a tropical storm as Paulette and Rene did, possibly before the weekend. 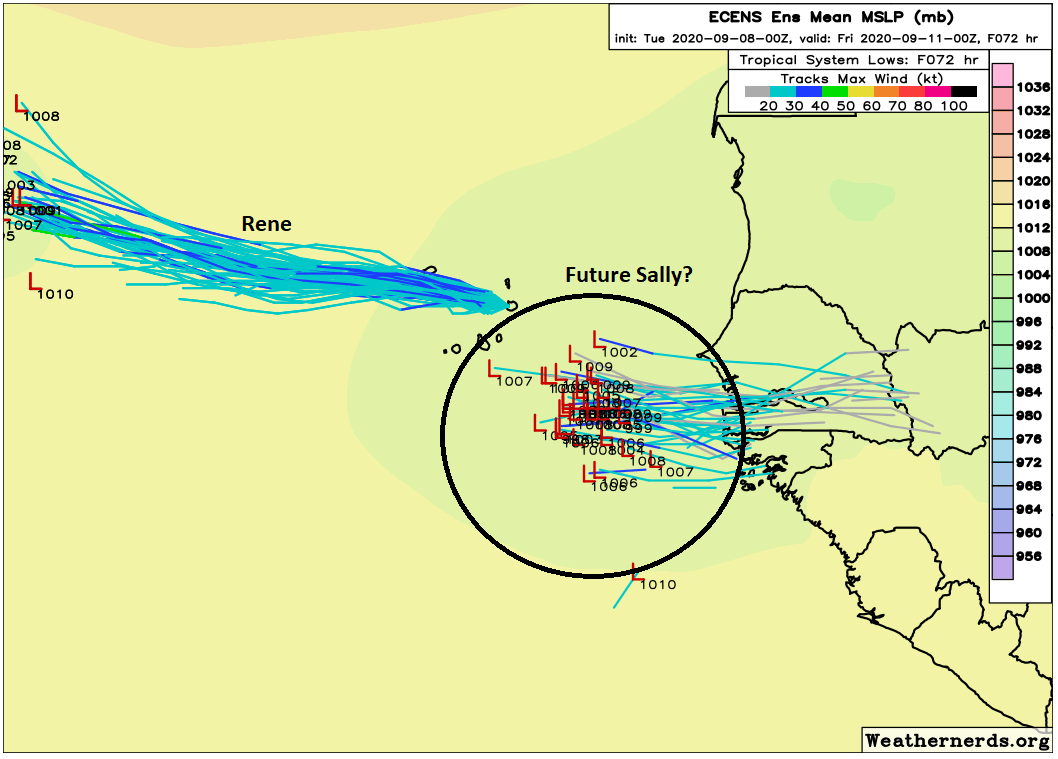 The National Hurricane Center says the next system has a 70% chance of developing by the weekend, and multiple European ensemble members here show this happening by Friday. (Weathernerds.org)

The map above shows the number of European ensemble members that have this disturbance emerging and beginning to develop by Thursday night. The National Hurricane Center has 70% odds on this disturbance developing within 5 days. It seems likely that we will have a depression or Tropical Storm Sally by the weekend.

So where does this go? Well, you can see on the map above that this system may emerge farther south than Paulette or Rene did. That’s important, as it provides the system an opportunity to come farther west before beginning the “out to sea” curve process. If this system develops strongly and quickly, it will have a better chance to find an escape route into the open Atlantic than if it struggles into next week. In that latter scenario, the system could perhaps find its way as far west as the Lesser Antilles before having a chance to turn more northward. That’s a solid week away at least, so a lot can change between now and then. But in general, if I’m rooting for this to avoid land, I’d rather see it get organized quicker than slower. We don’t think this is ultimately a Gulf threat, but there are enough ways it could become one that I suggest we check back in on this in a few days. Even if it did make it the Gulf, it would not occur until late next week or weekend at the earliest. We have a long time to watch this one.

There may be another system developing off Africa by next week as well, but it’s too soon to speculate on whether or not is has a future.

Anything homegrown to watch?

Right now, we don’t anticipate any homegrown systems to be of concern. With our cold front failing, that slight risk has basically been eliminated. There is Invest 94L off the Carolinas, but that is expected to track to the Carolina coast within the next four days, and it would likely not be a serious storm. There was a large blow up of thunderstorms south of Cuba yesterday, but that has completely dissipated today. The western Gulf has a good deal of wind shear overhead for a bit, so we are not worried about anything in the near-term.

So, we’ll close with a quick note on where we stand right now in terms of how absurdly fast this season is moving. With Rene forming yesterday, it displaced 2005’s Rita (a true four letter word around here) as the earliest forming “R” storm. Rita formed on September 18, 2005, so we’re running about 11 days faster than the fastest on record. Interestingly, the record for earliest “S” storm is 2005’s Stan, which didn’t form until October 2nd of that year. So we’re going to be obliterating 2005’s speed records. We are not going to be obliterating 2005’s intensity level, however. Laura is a prime example of why it’s foolish, really, to focus on any one metric to quantify a hurricane season. That was an awful, awful storm, so who cares if the rest of the season had a bunch of middling storms?

2020 keeps churning out tropical storms and maintains a commanding lead for the year-to-date record.

But average storm duration and intensity remains low, and as ACE climatology ramps up fast during peak season, 2020 now sits at AVERAGE. This is pretty crazy. pic.twitter.com/BtitVwjhBL

Alas, we need some way to quantify a season to place it in historical context, so accumulated cyclone energy (ACE) is one of the best ways. And as of yesterday afternoon, despite already being at 17 named storms, we’re merely at “average” for ACE. You can see from Sam Lillo’s chart above how much of an outlier this year is at the moment. 2005 had about 2 to 3 times the amount of ACE, despite fewer storms to this point. 1933 and 1995 (along with 1893) sort of stand alone, however. Whatever the case, it’s been Laura and everyone else so far this season.Hopefully it stays that way, but there’s a long way yet to go.

19 thoughts on “Eye on the Tropics: The peak of hurricane season is here”