Temperatures are cooler and drier this morning, and this has largely ended the chance of fog like that which the Houston area experienced Wednesday. We now will see some very pleasant weather before rain chances return on Sunday.

Thanks to a dry, northerly flow the region will have three dry and sunny days, with moderate high temperatures in the mid- to upper-70s. Low temperatures will range from the upper 40s north of Houston to the upper 50s to 60 degrees right on the coast. Overall, the weather should be just about perfect for the fall in Houston. 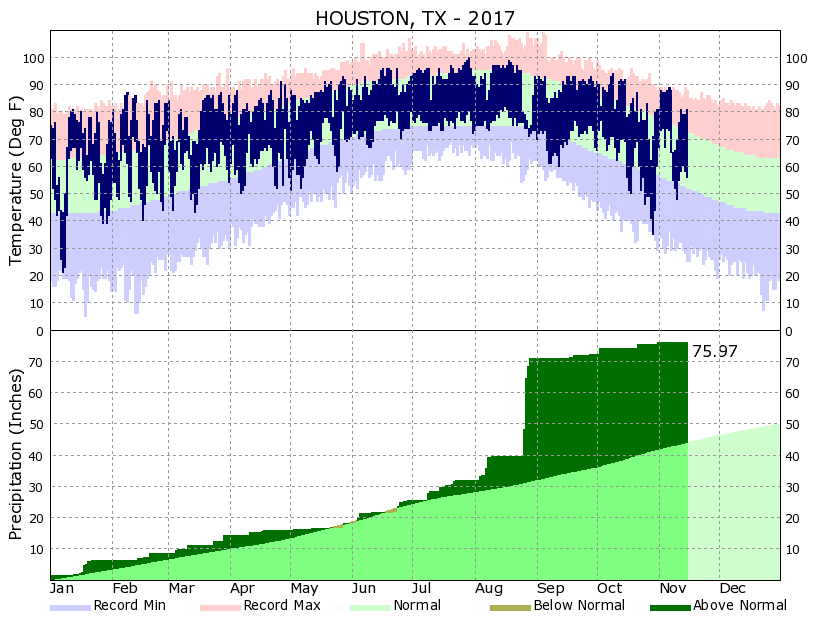 Houston received a ton of rainfall at the end of August, but not much since then. (National Weather Service)

The one concern we’ve been discussing is the lack of rain since Hurricane Harvey. I know, it seems daft to worry about drier weather after a storm like that. But the fact is, most of Houston has had just 4 to 6 inches of rain in the 14 weeks since the storm, and this is causing the region to slip into drier than normal conditions. We’re not in a drought yet, and there are no major widespread, or significant concerns. However by the end of a La Niña winter (typically drier than normal for Texas), we might be.

With that said, I’m closely watching for the possibility of rainfall for the area, and we have a decent chance for some precipitation to start next week. Due to some upper-level low pressure systems, I think most of the region probably will see between 0.5 and 1.5 inch of rain between Sunday and Tuesday of next week. Along with this we’ll also see more humid air, with highs in the upper 70s and lows in the mid- to upper-60s.

Sometime later on Tuesday or Wednesday—the timing still isn’t locked down—we’ll see the arrival of the first of several rounds of colder air. This pattern change into winter is still coming, and we still think we’ll see perhaps a week or more of high temperatures in the 50s and 60s for Houston, with cold nights. I don’t see any evidence of a freeze yet for central Houston, but certainly northern areas may well be in line for temperatures of 32 degrees or below. We’ll see.

5 thoughts on “Fabulous fall weather on tap for Houston, rain may return Sunday”