The concern about the potential for heavy rains and storms this evening appears to have been overblown as storms have remained well to the north of the Houston area. Although moisture levels are high, there just hasn’t been enough of an impetus to spur shower and storm development over southeast Texas.

Given the quiet radar trends I think we can have some confidence that we won’t see the development of widespread rain showers over the Houston region through at least about midnight. That doesn’t mean we won’t see some isolated storms, including the potential for severe weather such as a tornado or two, but I don’t see the very heavy, widespread rain we were concerned about earlier. This is very good news because it cuts down on the potential for extremely high rainfall totals during this event. 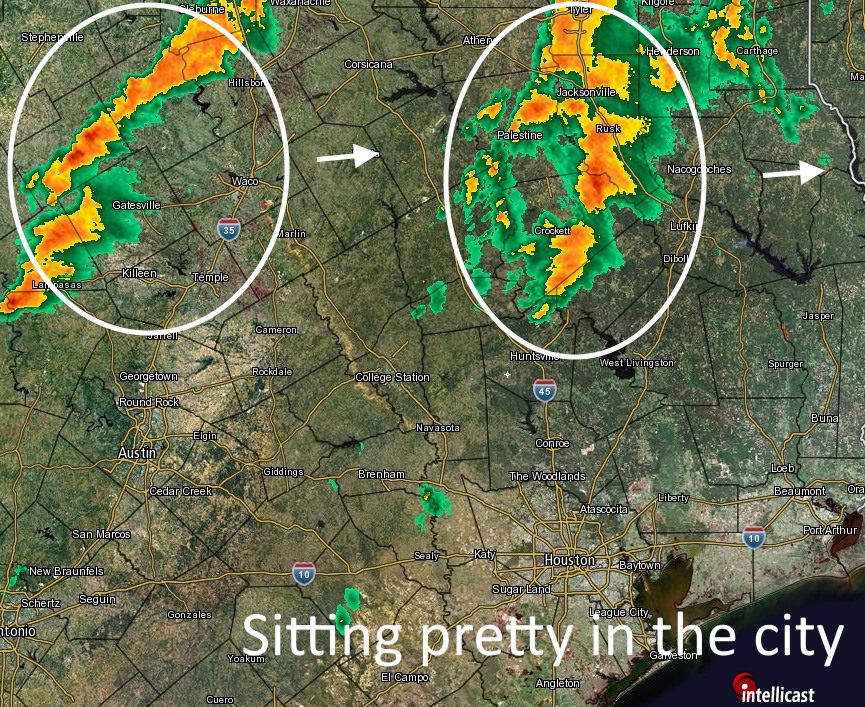 Radar as of 7:15pm CT on Friday night. Storms have so far developed north of Houston. (Intellicast)

Confidence is also increasing that the storm systems which have developed over northern Texas could sag toward the Houston area early on Saturday morning, perhaps around sunrise. The most likely scenario is a fairly large complex of storms, bringing strong winds and the potential for hail or even a tornado, moving into Houston. If these storms progress quickly through Houston then most areas should only pick up a few inches of rain (if that). One concern is that the storms slow a little bit, and we still see some isolated areas getting 5 inches or more of rainfall in a few hours. In any case, there’s still the potential for some nasty weather across the metro area from the wee hours of Saturday morning through around noon. After that we should see some drying out. If you have plans later in the day on Saturday , or during the evening, I’d be cautiously optimistic.

With that said there’s no question the first half of this rain event has busted, so we can hope for something similar tomorrow morning. But I wouldn’t bet on it at this point.

Rain chances will hang around on Sunday but I think showers that develop will probably be of a more scattered nature rather than a huge storm complex moving through.

At this point we could see another pretty healthy round of showers on Monday, but there won’t be quite as much moisture to work with so I’d be less concerned about the really intense rainfall rates that can cause flooding quickly.

21 thoughts on “Good start to the evening, but still some concerns for early Saturday”