It’s quite warm out there for late November, with lows in the upper 60s. This is nearly 20 degrees warmer than normal for this time of year, and right now the “minimum” temperature of 69 degrees at Bush Intercontinental Airport this morning ties the record for “high minimum” temperature on Nov. 30 in Houston. A weak front, and then a stronger front, will soon bring an end to these warmer conditions, however.

Friday will be a lot like Thursday, which is to say mostly cloudy, with muggy conditions, and highs likely in the upper 70s. The region will also likely see some scattered showers today and this evening, but these should be nothing too serious. It will be another warm night, but a cool front should move through during the overnight hours, bringing some drier air with it. Can’t rule out some showers with the frontal passage, but at most I expect a broken line of storms to move through the area. 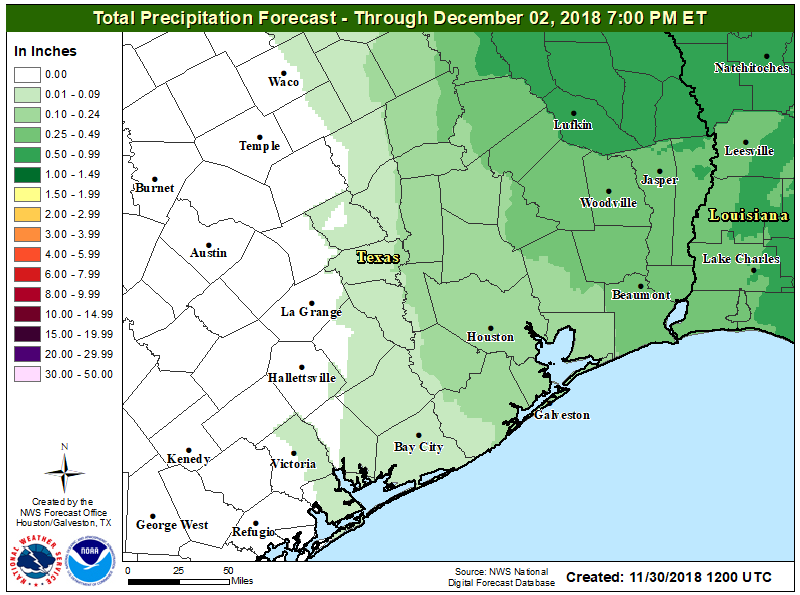 Any rain accumulation Friday and Friday night should be moderate. (National Weather Service)

A really nice day. In the wake of Friday night’s front, drier air will flow in from the west, and this will push humidity levels down during the daytime. Highs will generally be in the upper 70s, but some areas may briefly touch 80 degrees under mostly sunny afternoon skies. Temperatures will fall fairly quickly as the sun sinks toward the horizon, and overnight lows will be in the 50s for most of Houston, except the coast, which should be a little warmer.

Another pretty nice day, although winds will swing back out of the south, so some moisture will begin to move back in. Even so, we’re looking at mostly sunny skies, highs in the 70s, and probably no chance of rain. Outdoor plans look good to go for the entire weekend.

A much stronger cold front will approach Houston on Monday, and likely push through the city around noon or during the afternoon hours. This will be a classic front, with stronger winds out of the north and a pretty quick temperature change. Rain seems unlikely with this frontal passage. Lows Monday night will drop into the 40s for most of Houston under clear skies. 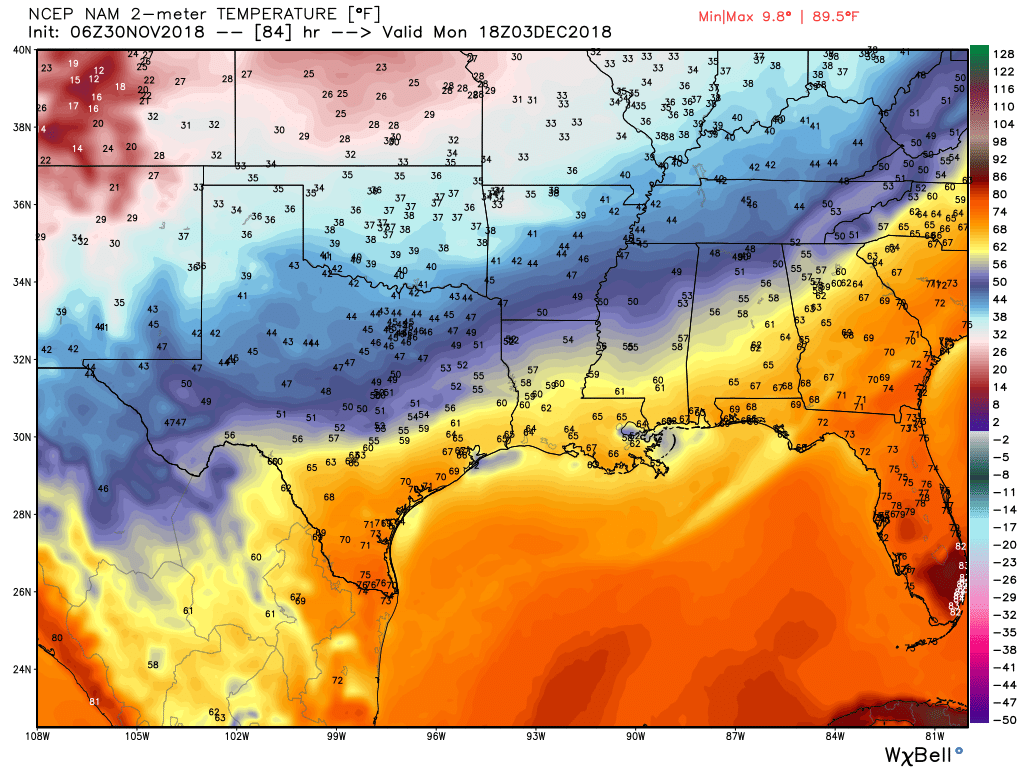 Tuesday and Wednesday will be cold, with highs likely only in the 50s. A freeze is possible for areas well north of Houston, but doubtful in or near the city itself. We’ll see a gradual warm up heading toward next weekend, when a storm system may move toward the area. Global models suggest this one may produce some widespread rainfall, so approach any outdoor plans for next week with a bit of caution. We’ll have more information about that likelihood on Monday.

10 thoughts on “Houston ties record for warm morning, but a super weekend ahead”