As Eric described yesterday, this weekend’s front is not packing much punch with it. I mean, look, a break from the high humidity is definitely nice, but we would all probably prefer something more definitive by now. “Autumn” is fickle in Texas.

More of the same is expected. Portions of south-central Texas have received over 10″ of rain this week, and there’s currently flooding on the Rio Grande near Laredo. We’ve been far enough east to really avoid most of it, and we’ll remain there again today. Just a smattering of hit or miss downpours should be expected today. It will probably be a bit more than the last two days with the front approaching. Otherwise it will be partly sunny and continued hot and humid.

The front should work through here either late today or early Friday. You probably won’t notice much of anything though until Friday night. So expect another warm to hot day Friday, with a good bit of humidity. Perhaps it won’t feel as oppressive as Thursday. We’ll continue with a very slight shower chance Friday before the drier air arrives Friday night.

All in all, this weekend should be a decent one. We’ll certainly have lower humidity on Saturday. In fact, if you watch the animation below, you can see how the dewpoints start to drop off Friday night into Saturday morning. That will lead to a really nice, albeit still hot Saturday.

Sunday will be similar, with a good deal of sunshine, but humidity staying under control. Both days will see high temperatures generally in the upper 80s (perhaps a couple degrees cooler north). Morning lows will bottom out in the upper 60s in Houston proper, but cooler in some of the suburbs. I don’t know if it will feel “refreshing” per se, but it will be nice for a change.

The humidity returns with authority Sunday night and Monday, which brings us right back around to square one. We’ll be in a rather persistent late summer, high humidity pattern most of, if not all of next week. Daily chances of thunderstorms will be mostly minor, but they’ll be with us. We’ll be on the periphery of a really, really strong upper level area of high pressure that will help keep the heat turned on, not only here, but also to our north. Places like Chicago and St. Louis are likely to see temps of 10-15 degrees or more warmer than usual. The weather maps look more like early September than early October for next week. As Eric noted yesterday, there may be some hints of a front in 10 days or so, but it’s nothing I’d pin my hopes to just yet.

We’re slowing down a bit for now, with both Lee and Maria heading out to sea. Weather models are latching on to two other possible areas to watch. One would be near Florida this weekend or early next week, though it isn’t expected to develop much. 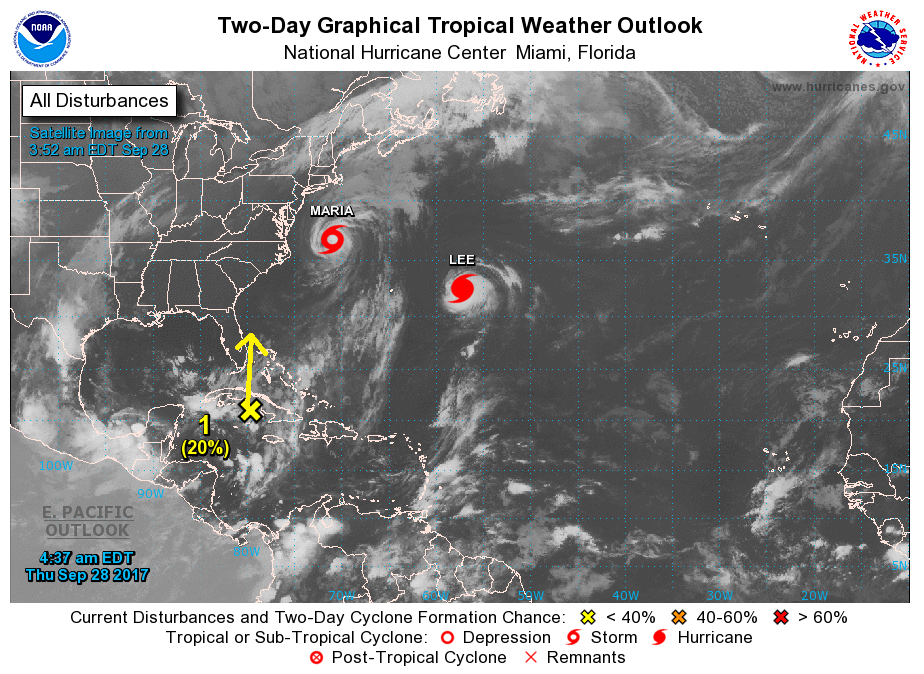 A weak disturbance near Cuba may briefly form into a weak system as it brings heavy rain to Florida this weekend. (NOAA/NHC)

It will bring some heavy rain to Florida though. Its remnants may actually work west across the Gulf next week, but with strengthening high pressure to our north, it’s likely to be disorganized and head south of the Houston area. So it’s not a concern.

The other area would be in the Gulf or Northwest Caribbean next week. There was some “chatter” yesterday about models showing a storm in the Gulf in 10 days. Yes, it’s possible we do have a system there at some point in the next couple weeks. But this one is unlikely to head to Houston. Yes, it’s something to keep tabs on, but the prevailing pattern suggests slow development, slow movement, and much higher odds in the eastern or central Gulf than the northwestern Gulf (where less than 10% of the 50+ European ensemble members show a system in the next 15 days). So, am I worried about this for Houston right now? Absolutely not. But we will continue to watch it going forward as always and keep you posted wherever it should go, if it even develops.

4 thoughts on “Houston’s kinda, sorta cool front on the way”