6:45 am CT Thursday: Good morning. We’re tracking near-term weather issues related to Hurricane Delta, which is still expected to come ashore in southwestern Louisiana on Friday afternoon or evening. Then, we can anticipate a sunny, hot weekend before a cool front arrives early next week to usher back fall-like weather into the region. That’s a lot to cover, so let’s jump right in with an update on Delta.

The storm has slowly organized over night and now has 100 mph winds. Overall, the Delta track forecast remains pretty locked in, with the storm moving to the northwest, and commencing a northward turn Thursday night. Along this track, which is is supported by virtually all of the reliable guidance and therefore of high confidence, the storm will very likely come ashore between Cameron, Louisiana, on the eastern side, and White Lake on the west. As you may remember, Hurricane Laura made landfall near Cameron in August as a devastating Category 4 hurricane. Delta will be weaker, and perhaps a dozen or two miles further east, but it will nonetheless bring repeat misery to a region still reeling from catastrophe only six weeks ago. This is truly horrible. 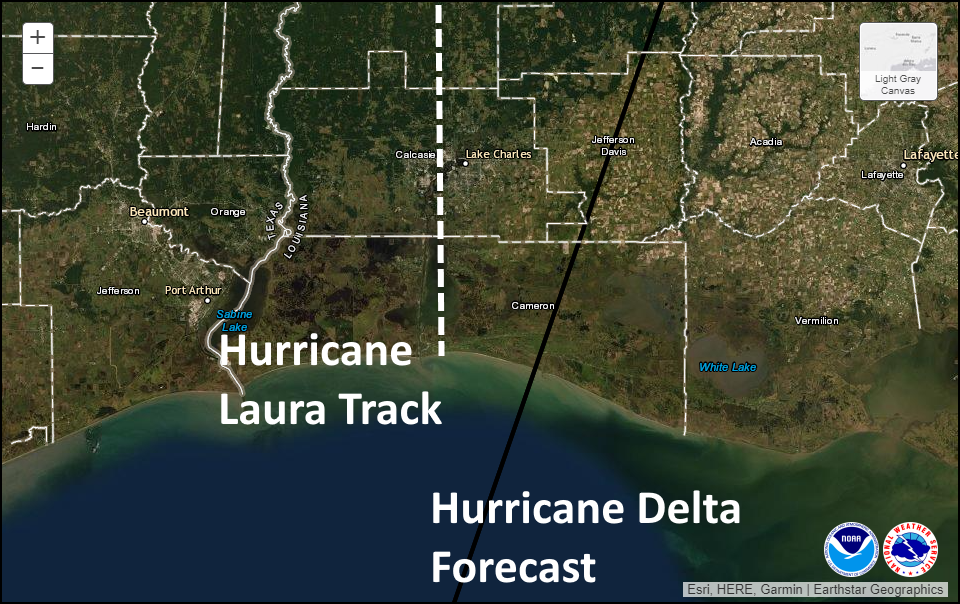 In terms of intensity, forecasters at the National Hurricane Center expect Delta to intensify today, and possibly reach Category 3 before moving over the cooler waters in the northern Gulf of Mexico and encountering higher wind shear. It is forecast to come ashore with 105 mph winds, as a Category 2 hurricane. Let’s briefly address the three main effects from Delta.

Here’s the latest forecast for maximum wind gusts from Delta. Note, this is not sustained winds, but the maximum winds that may briefly pulse up during Delta’s strongest squalls. These strongest winds will be along, and to the east of the storm’s landfall location. 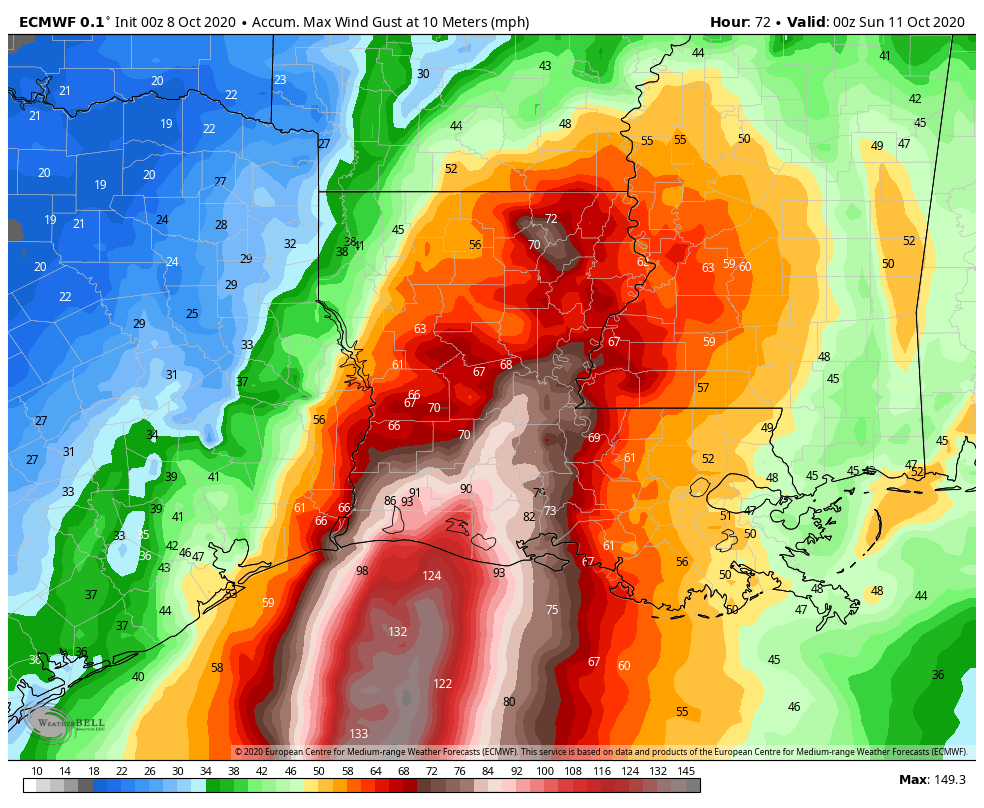 The strongest winds will occur on Friday. Much of the Houston area is unlikely to see Tropical Storm-force wind gusts, but coastal areas will definitely become quite windy during the day and evening, with the possibility of some gusts reaching 60 mph, especially along Bolivar Peninsula.

And here’s the National Hurricane Center’s forecast for “peak storm surge,” which represents the combination of surge and high tide for coastal areas. Again, the worst effects will be to the right of the storm’s landfalling location. For Houston, coastal flooding of 1 to 3 feet will be possible generally north of San Luis Pass, including around Galveston Bay and across the Bolivar Peninsula. 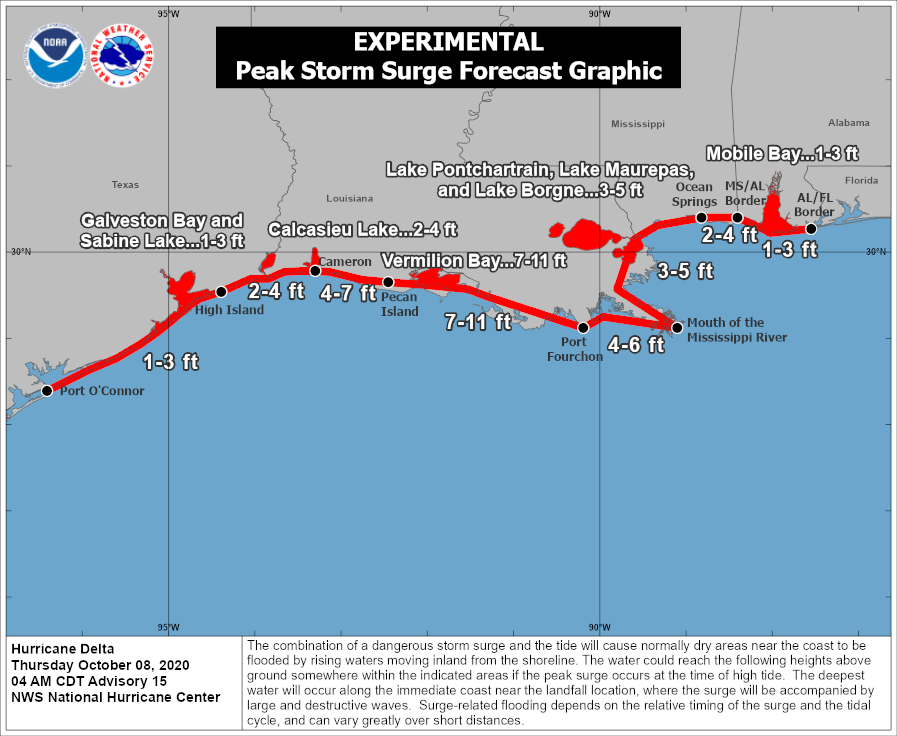 In terms of rainfall, we still have some uncertainties, as there should be a pretty steep rainfall gradient—a line along which, to the west, there will be virtually no rain, and to the east where there will be 1 to 2 inches. We think this line probably will fall somewhere in Houston, but whether it’s along the Interstate 45 corridor, or further east, is difficult to say. Here’s the official forecast for rainfall, but we would rate this as fairly low confidence. In Houston, we should see some outer bands of Delta moving through today, with the heavier rain chances on Friday. We expect no flooding issues in the metro area. 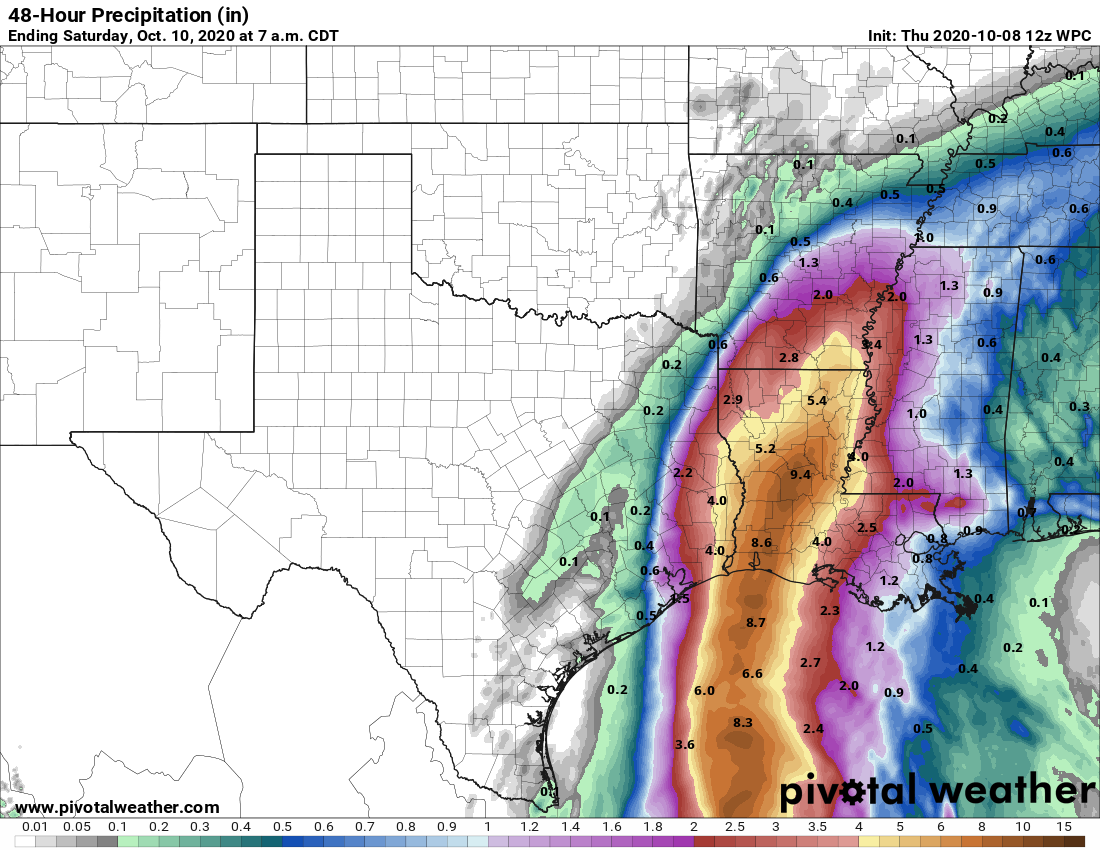 Today should see increasing clouds with the aforementioned chance of rain showers, especially on the southern and eastern sides of the region. Despite the mostly cloudy skies this afternoon, expect highs to reach into the upper 80s, with a warm night, and lows only dropping into the 70s. Hello, humidity!

This will be the day with the most impacts in terms of surf, winds, and rain. Skies will be cloudy, and highs may struggle to reach 80 degrees for most areas. Winds amp up during the day on Friday, with gusty conditions during the afternoon, evening, and overnight hours as Delta pushes through. With the kinds of winds we’re expecting we do not anticipate power outage issues in Houston, although there could possibly be a few problems right on the coast.

Showers should be ending by late Friday night or Saturday morning, and skies are expected to clear fairly quickly. The weekend will be sunny and warm, with highs in the upper 80s to lower 90 degrees. My sense is that this weekend and early next week are probably the last times Houston will see highs in the 90s in 2020, but that is a guess, not a promise.

A cool front appears to be on track to arrive on Tuesday to sap some of the region’s heat, with another stronger front probably arriving by or before the weekend.

Our next update will come no later than 2:30pm CT today.