We’ve talked about the late start to autumn this year in Houston, and we’re going to come very close to the latest start of fall on record. As a quick reminder, we’re defining “fall” as the first temperature of 65 degrees, or below, on or after Sept. 1. If we look at the data for the city, which goes all the way back to 1889, we can see how late we are this year in reaching this temperature, which denotes the arrival of the first decently strong “fall” front. 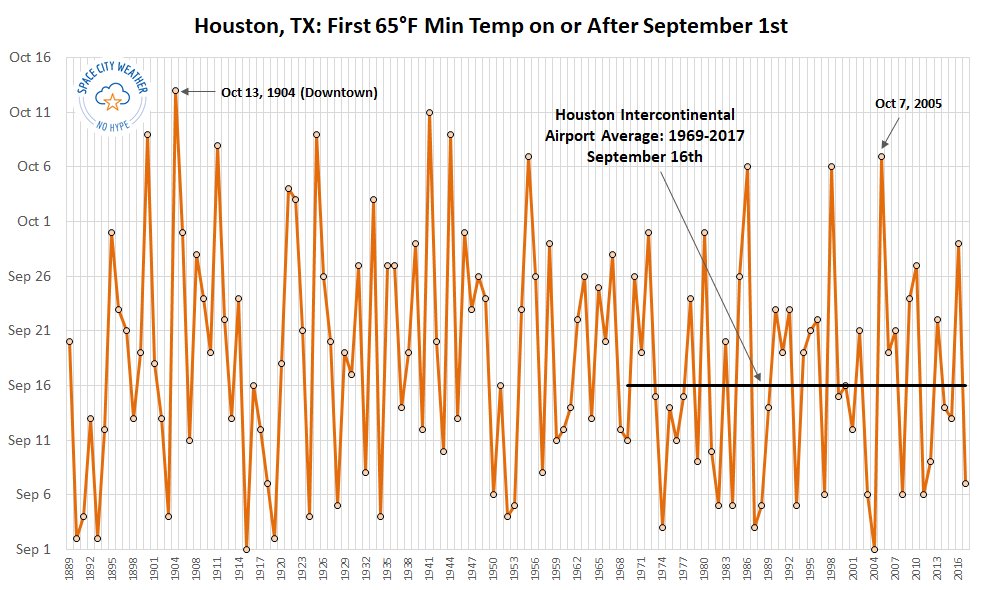 The first day of “fall” in Houston. (Brian Brettschneider for Space City Weather)

Today is October 9. Note that since the official weather monitoring station was moved to Bush Intercontinental Airport in 1969, the average date of “fall” was September 16th, and this trend line has been flat. The latest beginning of “fall” for this site came in 2005, on Oct. 7. We passed that a couple of days ago. The latest ever start to fall dates all the way back to 1904, when the downtown weather station didn’t measure a 65-degree night, or cooler, until Oct. 13. We’ll come close to that this year. But will be break it? Probably not.

We’re going to have one more sloppy humid day before some drier air arrives. Mostly cloudy skies should keep temperatures in the upper 80s, with some scattered showers and thunderstorms like the region saw Monday. While some of these storms could produce briefly heavy rain, we don’t expect them to persist for too long.

We’ve also seen might higher water levels along the coast during the last day or so; this is due to stronger lunar tides, persistent southerly winds, and waves from the distant Hurricane Michael. The effects of this should ease by Wednesday morning, with the passage of a cool front and wind shift. A coastal flood advisory remains in effect until that time.

A moderate cool front—meaning it originates from the northwest instead of diving due south from Canada or the Arctic—arrives on Wednesday. Clearing skies will allow for highs to push up into the mid- to upper-80s, but we’ll definitely notice the drier air as the Sun goes down. Lows Wednesday night will be in the upper 60s to 70s closer to the coast, and lower- to mid-60s inland.

Thursday morning (Oct. 11) is Houston’s first chance to record a 65-degree temperature at Bush Intercontinental, but it’s not guaranteed. If we miss out on Thursday or Friday, we’ll definitely hit it by next Monday. Either way, the end of the work week should be pleasant, with sunny days, highs in the lower 80s, and overnight lows in the 60s. Our first real taste of fall is going to be darn nice. 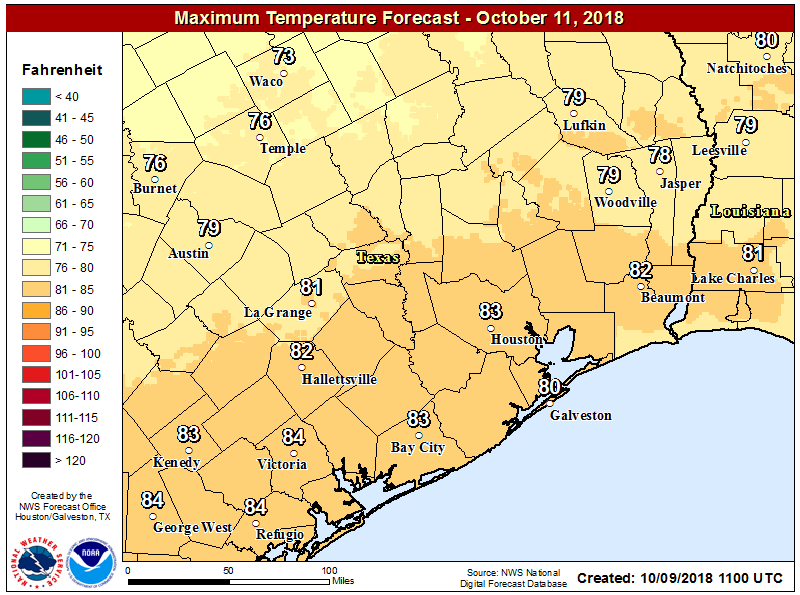 Thursday’s high temperature, with drier air and sunny skies, will be quite pleasant. (National Weather Service)

Saturday should be a lot like Thursday and Friday, although we’ll see a slight bump in rain chances on Saturday as some moisture begins returning from the Gulf of Mexico. Highs both Saturday and Sunday should be in the low 80s.

A second, considerably strong cold front pushes through later on Sunday, or Monday, and this will bring a decent chance of rain to the area. Forecast models suggest we could see 0.5 to 1.5 inches of rain later Sunday and Monday with the front’s passage, and in its wake.

The front will also usher in demonstrably cooler weather. High temperatures next week will probably be only in the 60s for a few days, before they recover to the 70s for the second half of the week. We may also see a sustained stretch of nighttime temperatures in the 50s for inland areas. This is fall, for real.

13 thoughts on “One last, sloppy humid day before a late autumn eases into Houston”