Last night at about 10:30pm, as the winds roared outside and you could just feel the cold moving in to Houston, my wife turned to me and said, “I’m so tired of winter. When is it going to warm up?” I’ll have some more words on this later in the post, but the short answer is that the second half of this month does appear likely to be noticeably warmer than our cold start to 2018.

Cold air will continue to blow into Houston today, but the winds won’t be quite so fierce as they were Thursday evening. Intercontinental Airport reported gusts of 38mph, with Galveston reaching 41mph, and College Station recording a gust of 45mph. Today wind gusts should remain in the 20s. Even so, it will be cold, with high temperatures struggling to reach 50 degrees under sunny skies. Lows tonight will be at or just above freezing in Houston, with a light freeze north of the city. 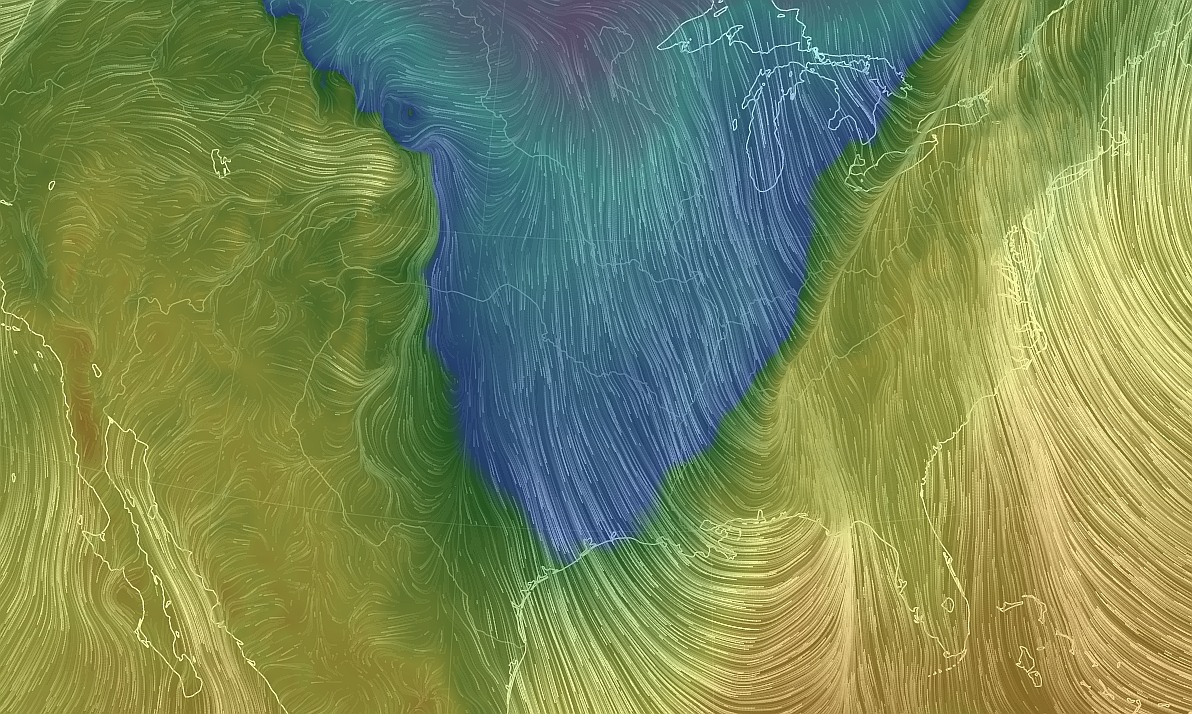 We we talk about cold air advection, this is what we mean. Notice the winds drawing cold, Canadian air all the way down across the United States and into Texas. (earth.nullschool.net)

After the winds finally die down later on Friday, we’re going to be left with just cold, sunny weather. High temperatures on both Saturday and Sunday will only reach about 50 degrees, and Saturday night should see a freeze over the northern half of the region, with temperatures in the mid-20s over some places like Montgomery County.

As the onshore flow returns, we can expect warmer weather for Monday, with highs rising to around 60 degrees under partly to mostly sunny skies.

The reprieve from colder air will be brief, as yet another cold front moves through late on Monday or on Tuesday. This front will probably bring freezing conditions for some areas back for the middle of next week, and keep high temperatures in the 40s under partly to mostly cloudy skies. As the front moves through, we’ll have to watch for some freezing precipitation up north on Tuesday morning as well, but the details for that are pretty fuzzy. I do only expect rainfall only in the city of Houston itself.

Next week’s cold front seems to be the last really strong front for awhile. While there are always caveats about long-range forecasts, it seems that the pattern will change, with more of the colder air getting shunted off to the east before diving south all of the way to the Gulf Coast. For this reason, it looks like beginning around Friday or Saturday of next week, we’ll see a string of warmer days in the 60s and possibly even low 70s, with warmer nights in the 40s and 50s. Looking a little bit further down the line, the seasonal outlook for February, March, and April shows a likelihood of above normal or near normal temperatures.

February, March, and April will probably be warmer than normal in Texas. (NOAA)

So the answer to my wife’s question is yes, this harsh (for Houston) winter is going to end. Probably as soon as about a week from now.

28 thoughts on “Really tired of this cold? It probably ends in about a week”