As Eric has been conveying, this weekend is not going to be the most optimal for the Houston area. We’ve got rain chances in abundance. Thankfully, we don’t anticipate any serious problems from the rain, but if you have outdoor plans this weekend, you may need some alternative options. Let’s walk through it.

Yesterday saw a good bit of rain mostly south of the metro area, down toward Wharton and Angleton and west toward Brookshire, with a few storms here and there elsewhere.So far, quiet this morning, with just a few showers down in Matagorda County. As the day goes on, I would expect scattered showers and storms to fire up with daytime heating, beginning at the coast and spreading inland. Not everyone will see rain, but those that do could pick up a quick half-inch to inch of rain in a cooling downpour.

Expect highs near 90°, but a little cooler if it happens to rain a bit more at your location.

So, let’s start with this: I don’t think this weekend will be a complete washout. If you have outdoor plans, I might not completely abandon them. But I would absolutely have an alternative in place. I think Saturday may be a better day than Sunday, unless you live northwest of Houston. It won’t rain all the time and everywhere this weekend, but where it does rain, it may be heavy at times with some patchy street flooding possible.

Who are we expecting to see the most rain on which day? There will be a weak cold front draped inland over Texas. No, it won’t usher in cool, dry air, but it will act as a focal point for the rains. On Saturday it may be well north and west of the city, out toward Columbus and north to College Station and over into Walker or Madison Counties. By Sunday, it creeps closer to Houston. 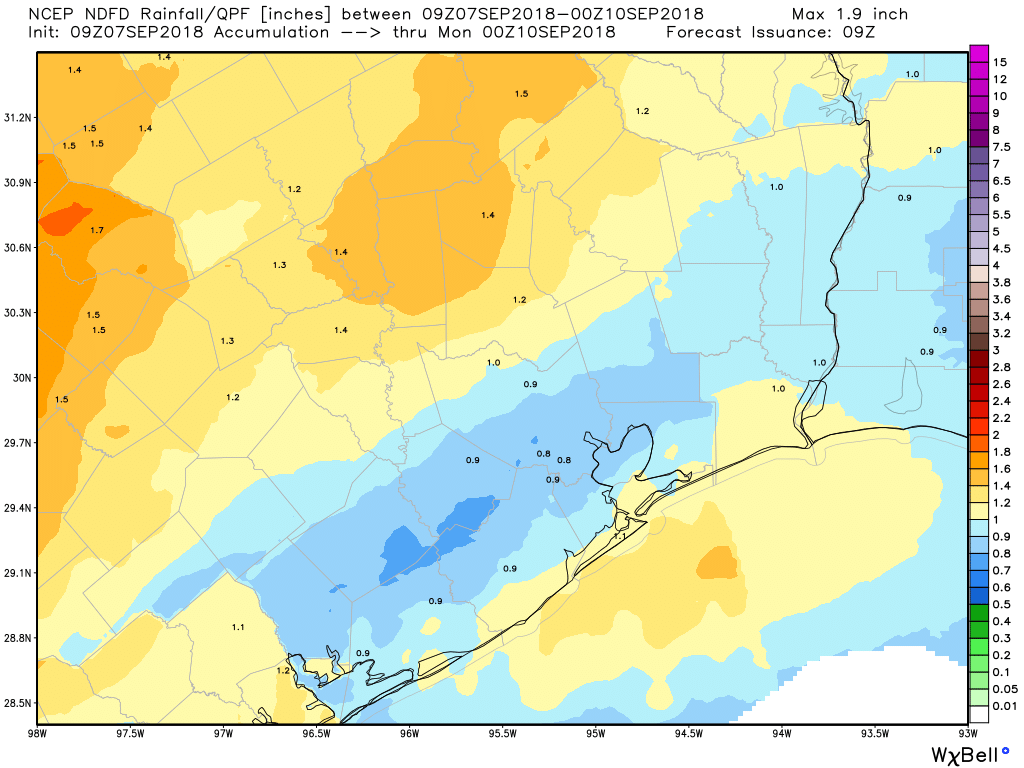 The NWS rainfall forecast through Sunday evening is just shy of 1″ on average in most of the Houston area, but there’s a better chance at over an inch both along the immediate coast and northwest of the city. (Weather Bell)

I still think the focus of showers on Sunday may be to the northwest of Houston, but perhaps out toward Katy and up to The Woodlands and toward Livingston, so a bit closer. So it’s conceivable that both days, the majority of the rainfall stays northwest of the Houston area. We’ll still see some scattered showers and storms regardless though.

On Monday that front may creep through the area while falling apart. So, again, scattered to numerous showers and storms with daytime heating, now across the Houston area. Look for temperatures to top off in the upper-80s most days on average (90+ if you don’t see rain, cooler if you see a good deal of it), with lows in the mid-70s.

The really high amounts of atmospheric moisture that will be over us this weekend will begin to temporarily ease up a little midweek next week. They don’t drop off enough to remove a chance of daily showers and storms, but the coverage should drop off a bit from where it has been, at least for a day or two. But most days through next weekend will carry some degree of rain chances. Look for high temperatures to average near 90 degrees, again, cooler with showers, or lower 90s with no showers.

Lots of boxes to check off here, so let’s run through things. Here’s the quick and dirty, then we’ll cover more details

Now, some details. Invest 92L this morning is sitting a few hundred miles west of the Cabo Verde Islands. It’s tracking to the west, not especially well organized, but very close to becoming a tropical depression. 92L isn’t in a hurry to come west, and it will move slowly but steadily over the coming days. It is the disturbance of most interest because it’s likely to continue to track west toward the Caribbean through next week. Once there, it has a plethora of options at its disposal, including a track into Central America, a lurch northwest into the Gulf, a right turn toward Florida or the Bahamas, dissipation, or just out to sea.

Invests 92L and 93L are both close to developing into tropical depressions in the Atlantic. (Tropical Tidbits)

Frustrating as it may be to hear, we really have no idea where 92L ends up. We do know that if it somehow got over all the hurdles it had to and ended up in the Gulf, it would be just under 2 weeks from today. It’s a long, long way away so there’s nothing to worry over here right now, but we will want to monitor its progress in the days ahead. When will we know if it’s a serious risk? Not until sometime early to midweek next week — at the earliest.

Behind Invest 92L is Invest 93L. Modeling is in good agreement that this one will develop with a little more voracity, which should allow it to gain latitude fairly fast and stay out at sea. We’ll keep tabs on it however.

We will want to also keep tabs on the Yucatan area next week for a potential disturbance that could briefly develop. I don’t think this is a serious risk to worry about, but it would be late next week, so again, we’ll watch it closely.

Then we have Florence. While Florence isn’t a concern for the Gulf right now, it is the most imminent storm on the board. Though it was a category 4 hurricane less than 48 hours ago, it succumbed to wind shear and has weakened back to a tropical storm. 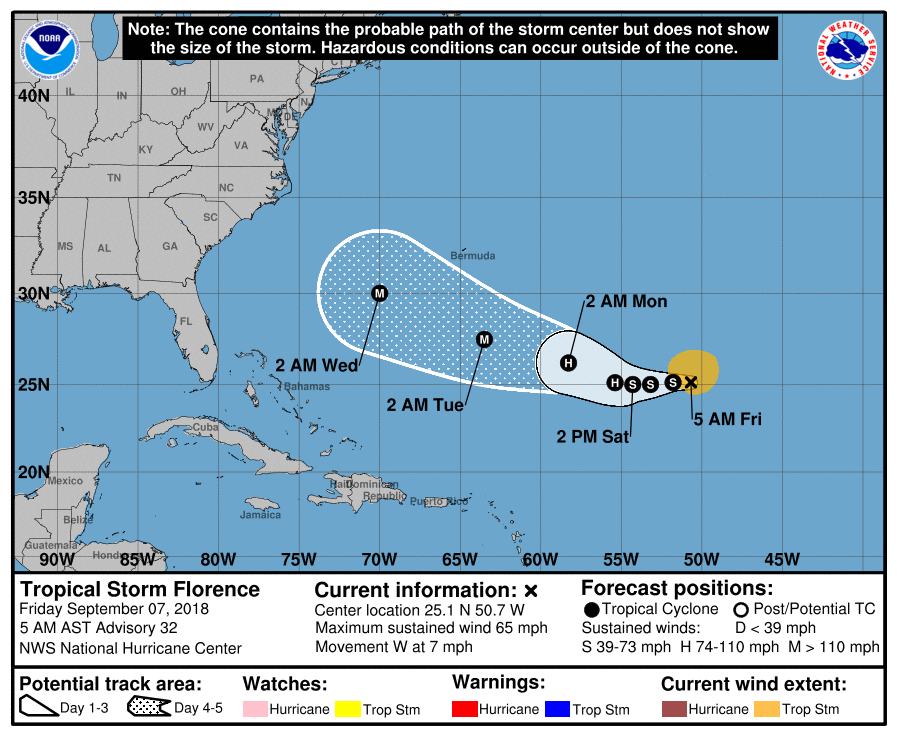 Florence will likely reintensify back into a hurricane and head toward the East Coast. Whether it makes landfall and where is up in the air still. (NHC)

Where does Florence go? If you can answer that, you’re doing well for yourself. Florence will be steered around an extremely strange looking weather pattern in the upper atmosphere. Every single time in recorded history (since the mid-1800s that we know of) that a storm has been located near where Florence is, it has curved out to sea. The pattern that is setting up is one that will force Florence back to the south and west, block the exit route, and allow it to at least threaten the Southeast, Mid-Atlantic, or even New England. How close it comes and to whom is the million dollar question, and though weather modeling has increasingly started bringing it toward anywhere between the Carolinas and New England, it is absolutely impossible to tell you the end game here. It could still go out to sea, but it’s getting more difficult for it to do so without having some impacts somewhere on the East Coast. Suffice to say, folks along the entire East Coast should be monitoring Florence closely.

We will refresh this on Monday morning for you, unless something serious changes this weekend.

33 thoughts on “Soggy at times this weekend; watching tropics”