Good morning! Our forecast for the week ahead remains more or less on track. We’ll continue to see warm, mild weather into Friday, at which point a front will cool us down for the weekend. Another front should arrive a day or two before Thanksgiving, but we still have some questions about the holiday’s weather.

Some parts of the region are seeing fog this morning, but it should burn off fairly quickly. Any sunshine this morning will likely be fleeting as clouds build over the area today. We should really start to feel the onshore flow as winds gust into the 20s, increasing moisture levels in the atmosphere. This may result in a very few, very scattered showers today, but for the most part the better rain chances will hold off until Friday. Highs will get into the upper 70s for the most part, and lows tonight won’t drop much below 70 degrees.

Did you like the forecast for Wednesday? Because as of now conditions will probably be similar on Thursday, although the onshore winds will not be quite as blowy. Is blowy a word? Well, we’re using it this morning. 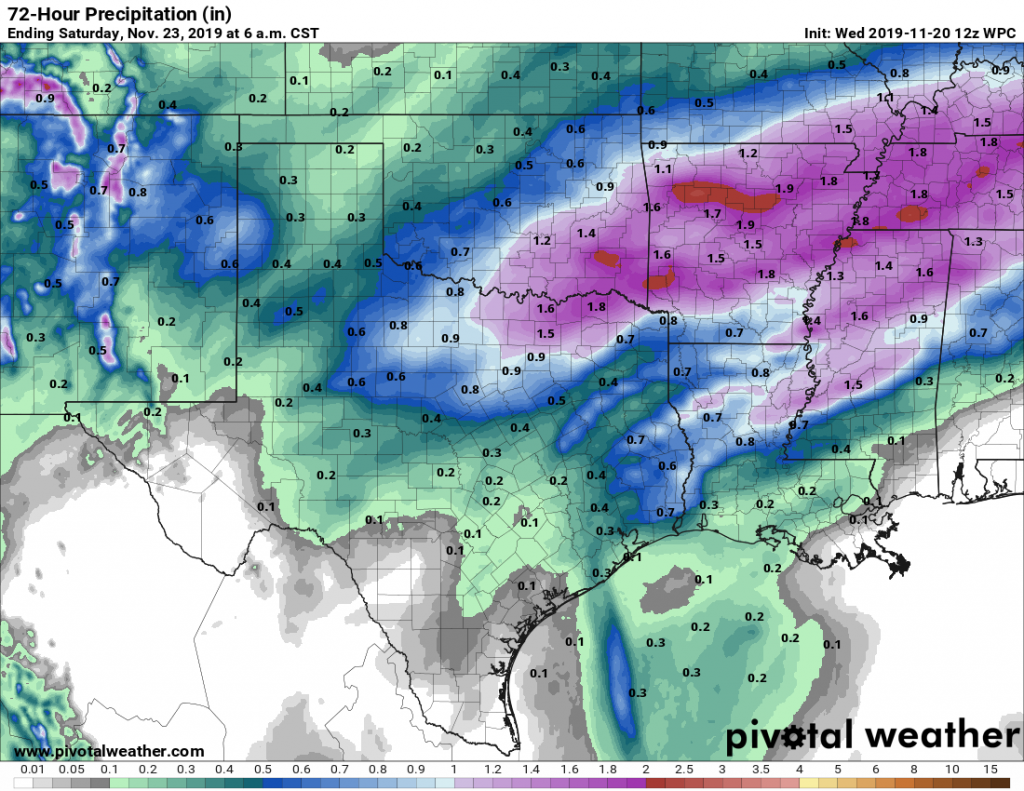 Rain chances will perk up on Friday with the arrival of the aforementioned cold front. An upper-level storm system will propel the front across the region, likely just before sunset for the central part of the region, and offshore by or shortly after sunset. It’s not an overly potent upper-level system, but it will provide enough lift to put our relatively moist atmosphere to work producing perhaps 0.25 to 1.0 inch of rain. The rains should end relatively soon after the front passes, with lows falling to around 50 degrees on Friday night.

As we’ve been suggesting, this front will set Houston up for another—it sure seems like once we got past September, this fall has been pretty darn nice—great weekend. Expect high temperatures in the mid- to upper-60s with overnight lows somewhere in the 40s except for the immediate coast. Skies should be mostly to completely sunny.

We should warm again into the lower 70s by Monday and Tuesday of next week before the region’s next front moves through, perhaps sometime Tuesday evening give or take several hours. If we’re worried about Thanksgiving weather, and who isn’t, the holiday weather will depend on the timing and staying power of that front. What do I mean by this?

The most likely scenario right now is that the front comes through late Tuesday, with just enough oomph to bring a pretty nice Thanksgiving, with a cool-ish morning and highs around 70 degrees. However, if the front comes earlier on Tuesday, it could be weak enough such that the onshore flow returns by Thanksgiving, setting up a bit warmer holiday with some slight rain chances. We’ll just have to see.

Our annual fundraiser is ongoing to support Matt and me for the time and expenses of operating the site. Thank you for your tremendous donations so far.