It’s much warmer this morning across the Houston area, as humidity and higher temperatures return and will stay for a while. This southerly flow in combination with a weak, stalled cold front will lead to some pretty healthy rain chances later today, tonight, and Wednesday morning. It’s nothing we’re too concerned about, but it could put a damper on some Halloween escapades this evening.

One of my least favorite things about fall weather in Houston is the stalling front—a cool front with just enough oomph to make it into the Houston area, but essentially stalls or fizzles out near the coast. This creates favorable conditions for rain (and sometimes thunderstorms) but no lasting cooling. Alas, that is what we will see today, as moisture moves back in from the Gulf of Mexico and meets the unstable air from the front.

I think we’re going to see mostly light to moderate, scattered rain showers for this morning, with the added possibility of a few scattered thunderstorms this afternoon. Rain chances increase this evening—right around trick-or-treating time—and then really pick up later tonight and into Wednesday morning. For the most part I’d guess we’re looking at 1.5 to 2.5 inches of rainfall, but areas near the stalled front where heavier showers develop could see 4 or more inches over time. I don’t think we’re looking at flood concerns, because the rainfall rates don’t look particularly intense, but some areas could see steady rainfall for a number of hours that adds up. 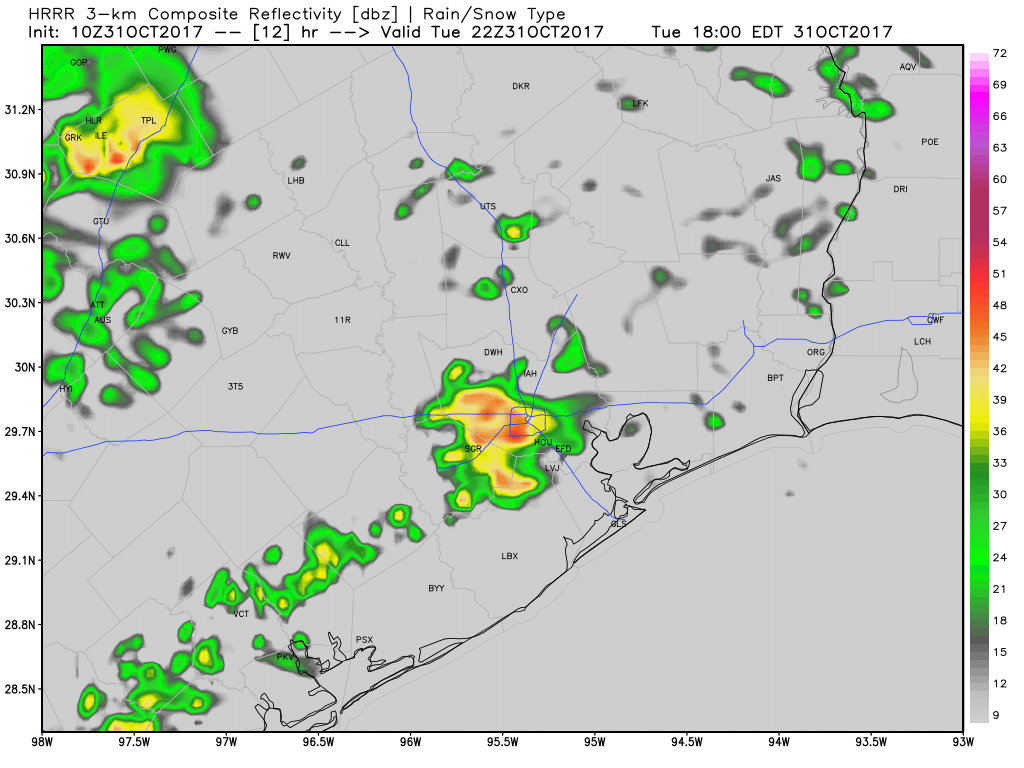 This HRRR model forecast for radar activity at 5pm CT shows the potential for showers this evening. (Weather Bell)

My hope is that most neighborhoods can get enough dry time this evening between 6 and 8pm for trick or treating (no guarantees on that, sorry) and that we’re all inside celebrating an Astros World Series victory after the widespread, heavier rain arrives.

Rain showers are likely to continue, on and off, through the morning hours. Right now I’d look for a potentially slow commute, but nothing overly disruptive. Conditions during the day will feel pretty warm and humid, even as the showers slacken during the afternoon and evening hours. Highs around 80 degrees.

There’s a slight chance of some rain showers on Thursday and Friday, but they shouldn’t be very heavy or particularly widespread. Looks for highs in the low-to-mid 80s, and correspondingly warm nights for early November.

Higher pressures this weekend should lead to drier weather and mostly sunny skies, with high temperatures likely in the low 80s (possibly mid-80s), and overnight lows in the 60s for inland areas and near 70 along the coast. It won’t be overly unpleasant, but it won’t be particularly fall-like either. Our next front probably comes around Tuesday of next week, give or take, although I don’t have a good prediction as to whether it will be strong or kind of weak. I’m hopeful lows get back into the 50s later next week, but am making no promises.

8 thoughts on “Suggested Halloween costume for Houston: A fish, perhaps?”