As mentioned, temperatures today will be quite warm, likely rising into the low- to mid-80s under partly to mostly cloudy skies. Lows tonight will probably only fall to about 70 degrees. For February—even the end of the month—this is just incredibly steamy weather.

The pre-dawn hours on Wednesday will remain warm, but a cold front will move through the area between sunrise and about noon. The big question is whether it rains. While there surely will be ample atmospheric moisture (thanks to the onshore flow Monday and today), and lift from the front, it seems probable that a capping inversion will limit rainfall. 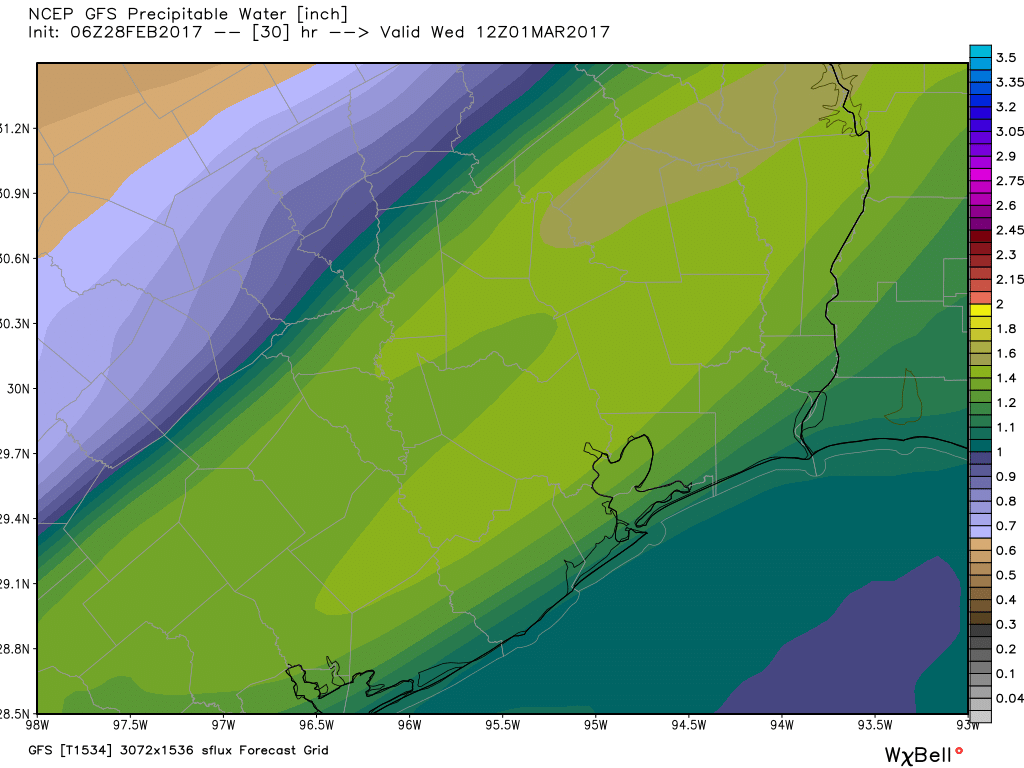 There is plenty of moisture to work with (light greens) tomorrow, but a cap will probably limit widespread showers. (Weather Bell)

Thus while we can’t rule out showers and a few thunderstorms, I think the front will largely be a dry or briefly wet passage. Highs Wednesday will probably hit about 80 degrees before temperatures cool off (along with much drier air) during the afternoon hours. Overnight lows will fall to around 50 degrees.

Expect some great spring-time weather, with partly to mostly sunny skies, highs in the upper 60s and lows around 50 degrees—warmer along the coast and cooler further inland.

Saturday into next week

You know the drill. Although Houston has gotten plenty of cold fronts this winter, they just haven’t had any sticking power. And so it will go this weekend, as the onshore flow resumes later on Friday, or Saturday morning. This will usher in moisture and warmer temperatures for the weekend, although I expect highs to remain in the mid- to upper-70s.

The bigger challenge comes in predicting the timing rainfall. Does it begin Saturday, and ruin the weekend? Or does it hold off until later on Sunday or Monday for the Houston area? There’s no consensus in the model forecasts, although right now I’d bet on mostly cloudy skies, but limited rain, this weekend before more widespread later Sunday night and Monday. In terms of accumulations, I don’t think we’re looking at any kind of a washout, with total rainfall amounts likely less than 1 inch through early next week for most of the region.

Posted at 6:50am CT on Tuesday by Eric