After an on-again/off-again dry summer in the Houston area, the last 10 days have felt like we’ve been dodging a continuous faucet. We will continue to deal with this into later this week and weekend.

Quick situational awareness for you:

As I write this morning, heavy rain is south and east US-59, mainly impacting coastal Brazoria County and much of Galveston, and Chambers Counties.

This morning’s radar loop shows the heaviest rains south and east of Houston, a trend that should hopefully continue pushing offshore today. A Flash Flood Watch remains in effect south & east of the city through this afternoon. (College of DuPage)

A Flash Flood Warning is posted for the west shore of Galveston Bay through Texas City back into western Galveston County. That goes until 7 AM, as they’ve seen healthy amounts of rain in that area overnight.

Look for rain to continue this morning, though with perhaps a gradual focus more to the east or offshore. It’s possible areas north and west of Houston stay quiet much of this morning before some scattered downpours this afternoon. The most likely area to see rain continue at a healthy pace at times will be along the coastline or near Galveston Bay.

Additional rain of one to three inches is possible along the coast and just inland. If rain hugs the coast longer than expected this morning and afternoon, totals could be higher in Galveston through Freeport. Areas north and west of Houston will see more sporadic, scattered amounts of less than an inch in most cases. 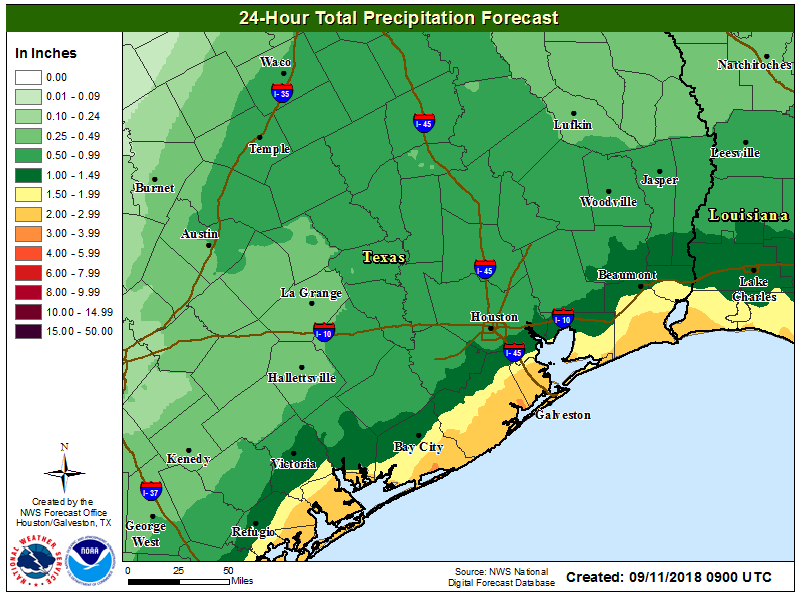 An additional 1-3″ of rain will be possible through early Wednesday morning south and east of Houston, with lesser, more scattered amounts north and west. (NWS)

More rain will be possible tonight, once again along the coast, however we expect the heaviest rain tonight to stay south and east of Houston and mostly offshore. Flash Flood Watches are expected to expire as long as that remains the case We’ll re-evaluate that later today and probably have a brief update for you this evening and let you know if NWS extends the Flash Flood Watch through tonight for the coast.

From this vantage point, the forecast for Wednesday and Thursday is pretty straightforward: Scattered showers and thunderstorms are likely on both days. We still need to iron out specifics and details, but expect more pockets of locally heavy rain, though they aren’t expected to be widespread at this point. Just a generic, “It’s probably going to rain at a few points between both days” will have to suffice for now.

Clouds and rain are at least holding down temperatures. Look for temperatures to range from the upper-70s to around 80° if it stays cloudy and dreary all day to the mid-80s if we see some occasional sunshine.

Invest 95L & Friday into the weekend

The National Hurricane Center, as of 5:30 CT this morning, is giving Invest 95L, our Caribbean disturbance a 60% chance of developing as it moves across the Gulf this week toward Texas. 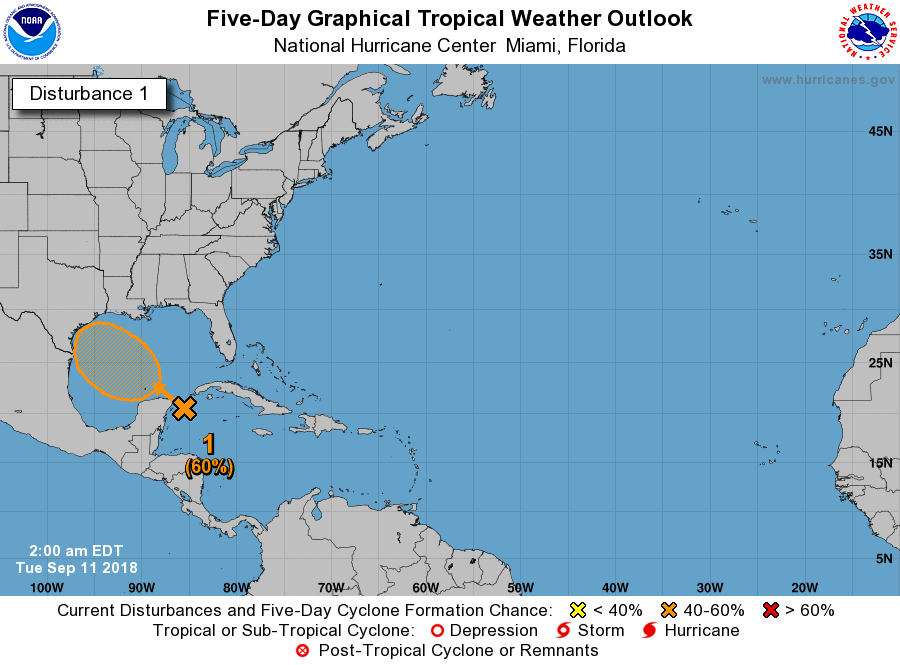 Odds are at about 60% that Invest 95L will develop as of very early Tuesday morning. (NHC)

Overnight weather modeling did nothing at all to increase our concern over this system, as no reliable models shows this developing into anything more than perhaps a depression or weak tropical storm.

There’s always a “but,” right? If you look at Invest 95L this morning on satellite, what stands out?

From a meteorologist’s perspective, I see two things. First, a lack of organization. Invest 95L isn’t quite ready for primetime yet, and hopefully it never is. Second is the substantial amount thunderstorms associated with it. This disturbance will be carrying a lot of moisture as it comes across the Gulf. So whether it develops into a formally defined tropical depression or tropical storm, it will have heavy rainfall along and north of its track.

So where is that track? Well, rainfall forecasts are difficult to parse out at this point because we have a bunch of rain in the near-term that isn’t associated with 95L. If you look at the current NWS forecast for rainfall from Friday morning through Saturday morning, you can see the footprint of 95L staying primarily to our south. 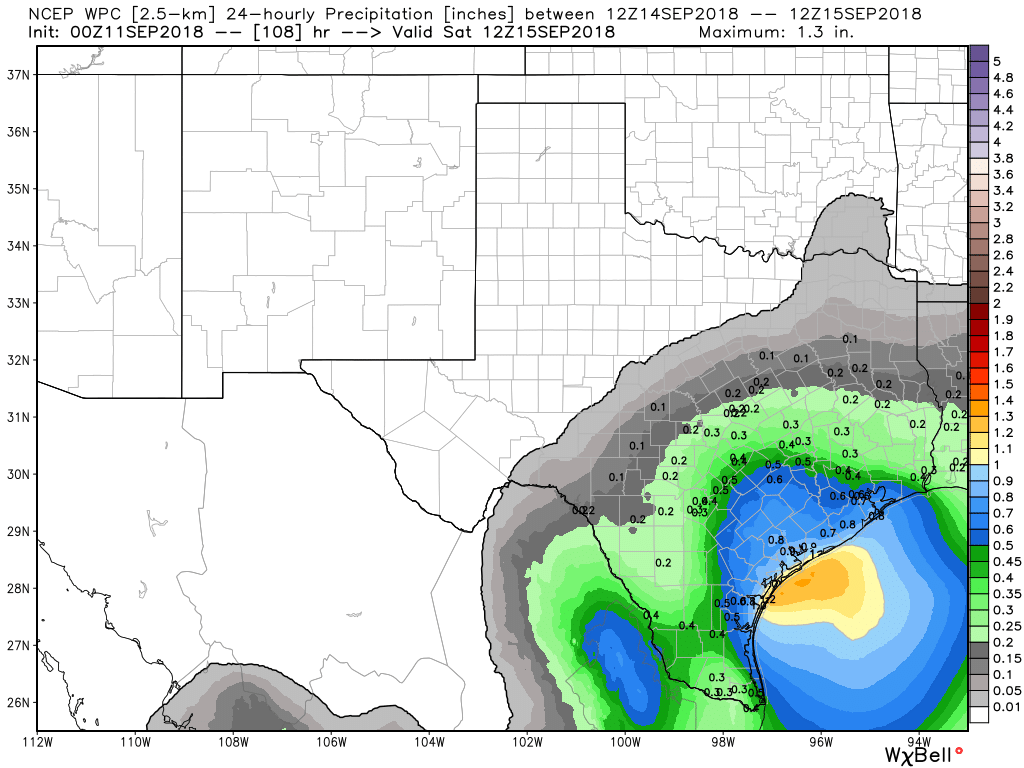 So at this point, we expect Invest 95L to track far enough south to keep the heaviest rain south of Houston. That being said, this is a four day forecast for a tropical disturbance without a center. This could change. For now, I would expect scattered showers and thunderstorms with locally heavy downpours both Friday and Saturday as Invest 95L works into South Texas. We will update you with the latest later today.

We finally may have a chance to turn off the faucet on Sunday and Monday. We’ll see.

A quick update on the rest of the tropics. Isaac has been downgraded to a tropical storm, where it is expected to stay for the next three to five days as it moves into the Caribbean. 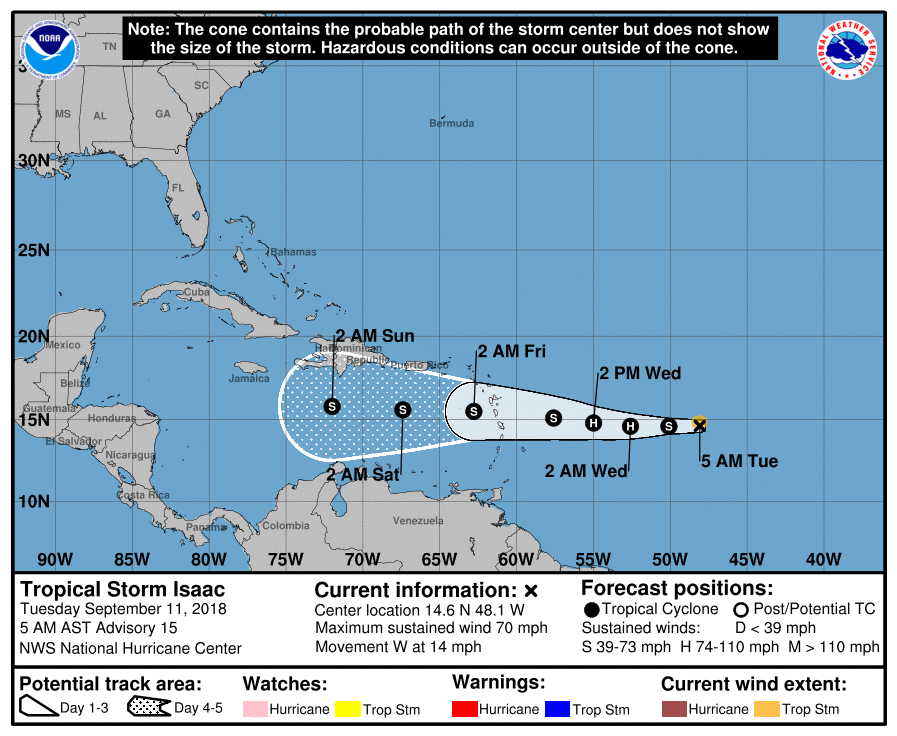 Is Isaac something for us to watch? Yes, as we would anything in the Caribbean this time of year. But the good news is that almost all reliable weather modeling keeps Isaac going west into Central America or basically falling apart in the Caribbean. So no reliable models show a threat to Houston or Texas at this time. But we will continue to watch it closely.

Florence continues to see intensity fluctuations and is presently a Category 4 hurricane with 140 mph maximum sustained winds. There’s been no good news in the last 24 hours with regard to Florence’s possible impacts on the Southeast U.S. There has been a subtle southwest-ward shift in some modeling, perhaps in part due to Invest 95L influencing the upper pattern over the Southeast. This puts more of southern North Carolina and northern South Carolina at greater risk for significant hurricane impacts. 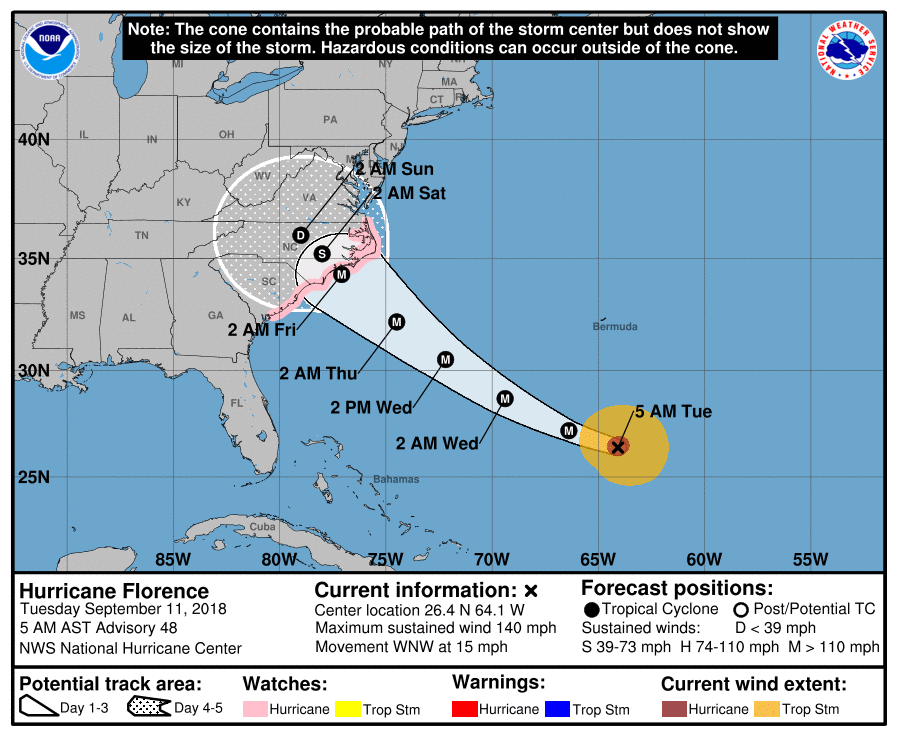 Florence is expected to track into the North or South Carolina coast on Thursday night. (NHC)

Florence continues to show all signs that it’s going to get cut off from any steering currents over the Carolinas. This will allow copious amounts of rain to fall somewhere between Virginia and South Carolina, depending on the stall. The current rainfall forecast has escalated further for this region, with the official forecast showing a 20″+ bullseye in eastern North Carolina. This means someone is likely to see higher amounts as well, perhaps closer to 25-30″ of rain. 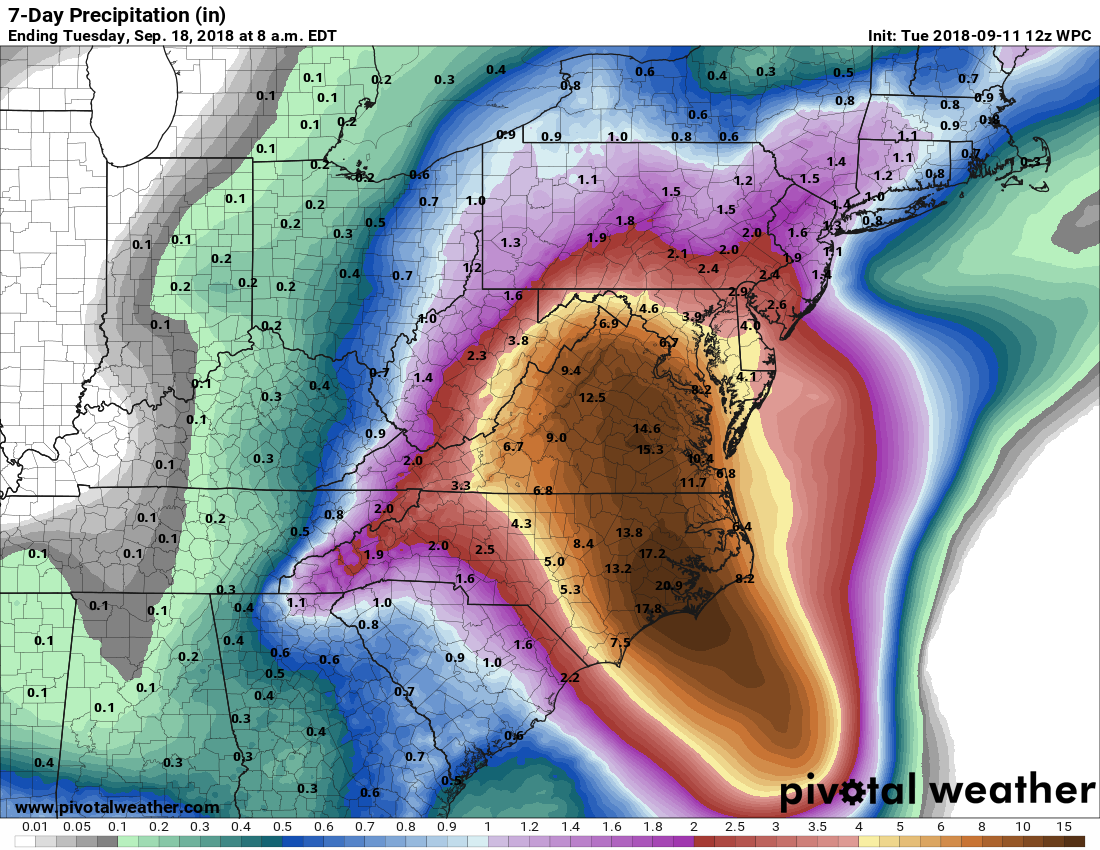 The official NWS forecast over the next 7 days calls for over 20″ of rain in parts of North Carolina, with higher amounts almost a certainty. (NWS forecast via Pivotal Weather)

While the exact details of the track and rainfall map will change in the next day or two, we know that this is going to be a really bad storm somewhere in the Carolinas and/or Virginia. Our thoughts are with folks in that part of the country, as we know all too well what a storm like this can do.

We will have more for you a little later today.