Eric and I just wanted to provide a quick update to you tonight because the forecast has been a little tricky here.

Most of today has gone as expected. But the warm front that was supposed to hang around or south of I-10 into tonight has lifted a bit further north than expected, and is currently approximately straddling US-59. It also hit 80 degrees at both Hobby and Bush (81) today. The air mass over us is plenty conducive for heavier rain at times. That said, radar shows scattered showers and storms west and north of Houston as we told you would be the case this morning. 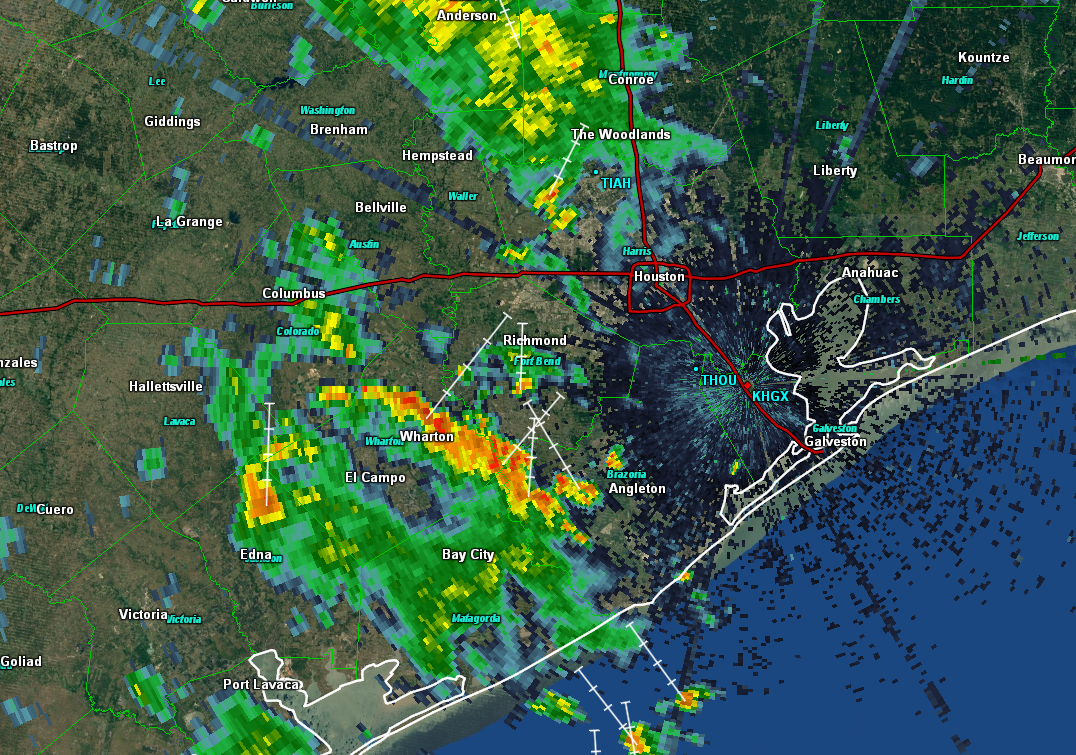 Scattered showers and storms are rumbling along west of I-45 this evening. (GR Level 3)

Some of this rain is fairly heavy. Thankfully, everything is moving along at a healthy clip so far, so it won’t rain too hard in any one location for too long.

The forecast from this morning deviates a bit from this point into the first part of Saturday. There have been some indications from various weather models this afternoon and evening that some areas around and southwest of Downtown Houston would see repetitive rounds of showers and storms through the night. The latest version of the HRRR model shown below also indicates this to some extent.

The HRRR model from late this afternoon shows some repetitive shots of showers and storms this evening and overnight in the Houston area. (Weather Bell)

Earlier runs of this model were a little more bullish on rain, but nonetheless, you get the idea.

So what does it mean? Neighborhoods primarily south of I-10 and west of I-45 stand the risk of seeing a few rounds of heavy rain and thunderstorms this evening and overnight. Rain amounts could be locally impressive in spots, on the order of 1-3″ (most of us will not see that much rain). If everything moves any slower than we expect right now, 4-5″ of rain could be a possibility in a neighborhood or two.

At this point, Eric and I don’t see serious flooding concerns tonight. Localized street flooding is always a possibility in the Houston area, but we just want you to be aware of a slightly wetter forecast in the region than perhaps was expected. And with folks out and about on a mild Friday night, we want you to know that some area football games could be dealing with some rain or lightning delays. If something changes to make this any more serious over the next few hours, we’ll let you know. But, again, we don’t feel that will be the case.

7 thoughts on “Friday night might be soggy in spots”