After a disappointing end to the Astros season, we could use a little sunshine around here to perk us back up a bit. Unfortunately, there’s not a lot of great news looking ahead. We just offer thoughts on the forecast; we don’t control the weather. But we apologize nonetheless.

Today will be another day of clouds and perhaps a couple sunny breaks in spots if you’re lucky. For those of you that missed warmer temperatures, you’ll be seeing some of those return today too. We crested into the 70s in Houston early yesterday afternoon, and we are already running about 10 degrees warmer than yesterday morning (mid-60s). So we’ll probably push the upper-70s today.

Radar as of 5:30 this morning showed heavy rain in spots from Matagorda Bay south to Corpus Christi Bay. (College of DuPage)

There will be a chance of showers and storms virtually anywhere at anytime, but as radar shows, the heaviest rains are likely to stay south of Houston. The Matagorda Bay region has seen the steadiest rains, but so far most places have only seen a quarter to a half-inch or so. As we go into this afternoon, the focus for the best rain or storm chances may shift to west or north of Houston.

Our next cold front is in line to cross through the area later Saturday afternoon or evening. Expect a mild, somewhat muggy Saturday morning, with AM lows in the 70s south and east of Houston and mid-to upper-60s north and west. We’ll probably have scattered showers tonight into Saturday morning across the region. Not everyone will see rain though. As the front approaches during the afternoon, we will have another shot at some showers. I am not too impressed by the dynamics of this cold front as it approaches our area, so I am not terribly worried about any significant weather as it passes by. Rain chances will trend toward zero on Saturday night finally. 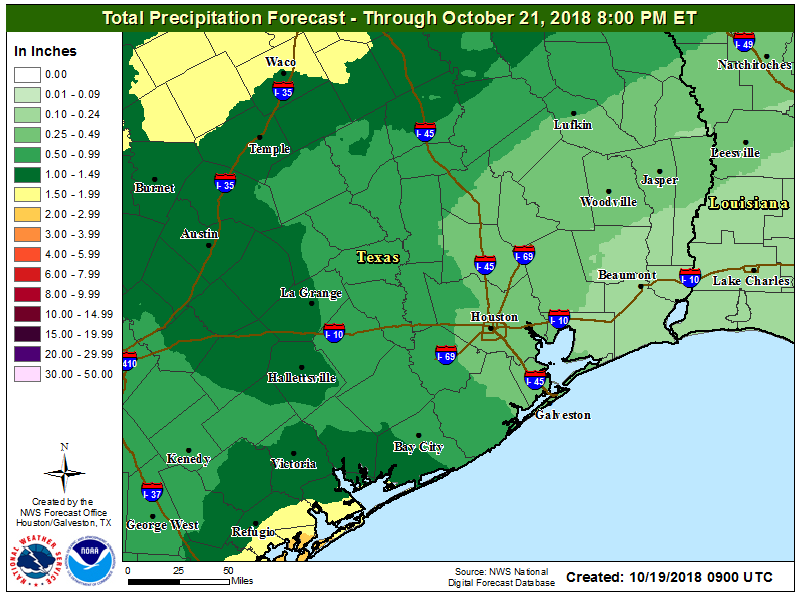 Most of the Houston area is expected to see a half-inch or less of rain this weekend. By Sunday evening, some areas toward Central Texas or down around Matagorda Bay may see over an inch of rain. (NWS Houston)

Expect temperatures ahead of the front to peak in the mid-to upper-70s south and east. Areas that see an earlier passage of the front north and west of Houston may not get much past the low-70s.

Sunday will probably be the nicest day of the lot. That said, don’t expect perfectly blue, sunny skies. We’ll call it partly sunny on Sunday and hope for something a little bit beyond that. Expect cooler temperatures in the upper-60s or low-70s after starting the morning in the upper-50s or low-60s.

A very active, quick moving weather pattern will continue to impact Texas next week. Clouds and rain chances increase during the day on Monday from southwest to northeast. The heaviest showers will likely be near the coast or southwest of Houston. But some locally heavy rain could be possible. Increasing clouds will hold temperatures back. After starting in the mid-50s, we likely won’t get much past the low-60s on Monday. It will be a bit cool.

Tuesday could see a brief respite from the rain chances with warmer temperatures. We’ll look for low-to mid-70s. We may have another system to deal with Wednesday and Thursday, so another round of higher rain chances is likely, with perhaps warming temperatures. We should still see cooler air later next week or weekend, but the details are very much uncertain right now. We’ll know a bit more on Monday.

Flood Watches are posted for much of Central Texas again today. 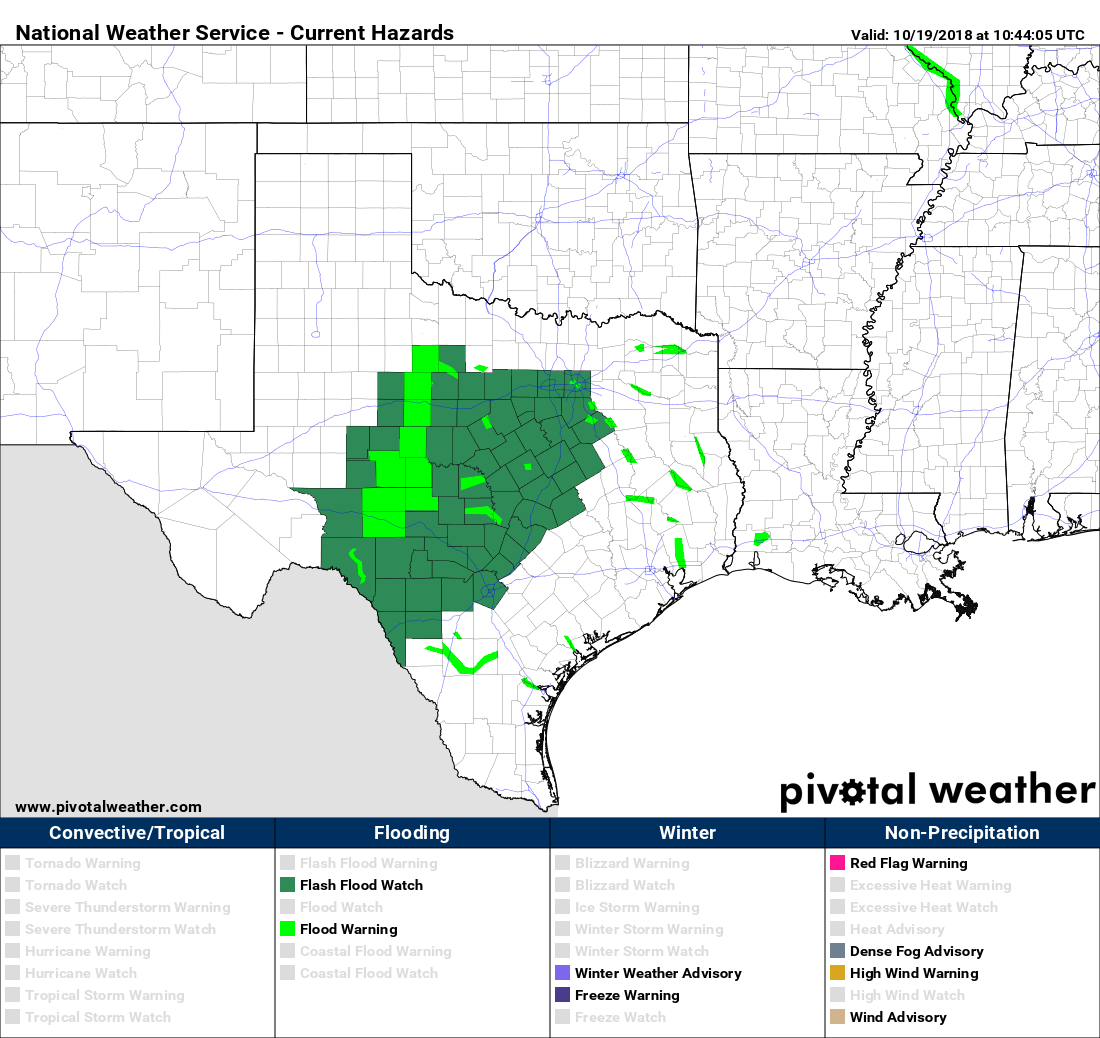 Flood Watches are back in effect for much of Central Texas, as another 1-2″ of rain is possible between what fell last night and what falls through tomorrow in parts of that area. (Pivotal Weather)

Between what fell overnight and what falls today and tomorrow, one to two inches of rain is possible in some of the harder hit portions of Hill Country. Outside Austin, Lake Travis is now at its fifth highest level on record and only about a foot shy of reaching fourth place.

The lake hasn’t been this high since 1997. You can see details of flooding at individual points here. More rain is expected in Central Texas next week with our next couple disturbances and potential moisture from a tropical system in the Pacific once again.

6 thoughts on “Cloudtober marches on”