Wind chill temperatures this morning are in the 30s across the Houston area, and for the first time in more than a week it really feels like winter outside. And it’s going to remain that way.

Winter has come to Texas this morning. (Weather Bell)

Winds will finally die down today, but temperatures are only likely to rise to about 50 degrees. Lows will fall into the 30s, but won’t reach freezing levels in the metro area. Welcome to the new normal for this week and weekend.

Wednesday looks to be the warmest day, with high temperatures of around 60 degrees.

Temperatures on New Years Eve — heading toward midnight — will generally be in the upper 40s, with partly cloudy skies. So bundle up!

Houston may see a slight chance of rain on Tuesday night, but for the most part this week we will be dry.

The forecast models are split as to whether we’ll see some rain this weekend. If we do it most likely will be in the form of light rain. I wouldn’t have any confidence in a weekend forecast yet, beyond the fact that it’s going to be cold.

This colder pattern will stick around for the next eight or nine days before we finally begin to see high temperatures climb back up into the upper 60s.

A Tornado Watch remains posted for Houston and areas north through 4 PM. Thankfully, we’ve only seen one brief tornado warning issued today, just to the north of Navasota. Around Houston, it’s been fine thus far.

The radar shows a broken, but gradually intensifying line of thunderstorms to our west, moving toward the western parts of Harris County as of 1:30 PM. I do think the threat for tornadoes will remain on the low side through mid-afternoon.The best parameters for supercell thunderstorms are shifting to the north and east of Houston now, and while we could conceivably see a storm spin up a brief tornado, the best odds for that are moving into Louisiana. 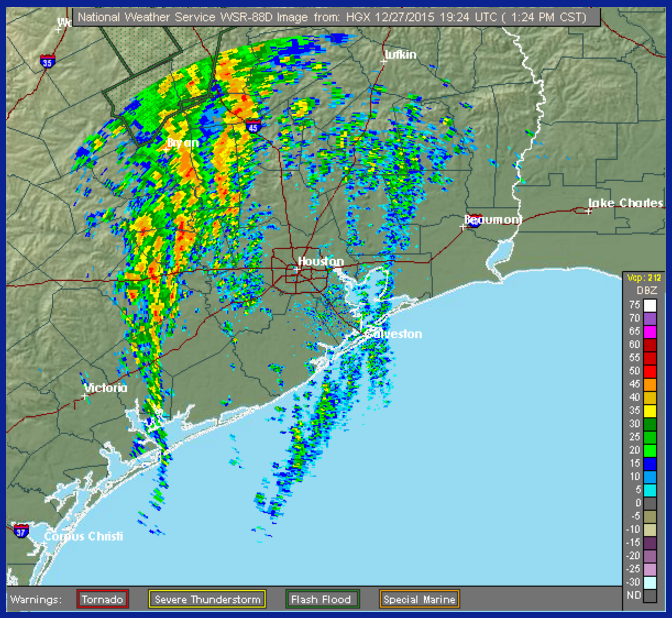 1:30 PM radar shows a line of thunderstorms organizing west of Houston. It will move through over the next few hours. (NOAA)

That being said, with a developing line of thunderstorms, we could see strong, damaging straight line winds become an issue as it organizes moving through the region. So, remain weather aware with a method to receive weather warnings this afternoon. In addition to the severe weather, heavy rainfall is occurring in these storms. Some areas may see 1-2″ in a short time, so localized street flooding will be possible into this evening.

Oh, and it will turn sharply colder after the line of storms to our west arrives. Temperatures may drop 25 degrees in an hour as the front arrives this afternoon. It will be in the low to mid 50s just about everywhere by evening.

So in sum: Tornado Watch still posted, but highest threat is shifting away. Strong to severe thunderstorms likely mid to late afternoon with heavy rain and gusty winds. Turning much colder as the front moves through.

The National Weather Service has gone ahead and posted a Tornado Watch for most of Metro Houston until 4 PM. It includes the City of Houston and points north and west. The watch does *not* include Matagorda, Brazoria, Galveston, or Chambers Counties. Everyone else, however, is under the watch. A Tornado Watch means that the atmospheric conditions are favorable for severe thunderstorms that could produce tornadoes over the next several hours. The best chance of tornadic storms will be north of I-10, but I would advise that if you live in Houston, keep an eye on the weather.

A Tornado Watch includes most of Southeast Texas through 4 PM. (NOAA)

Showers and thunderstorms have been impacting the area mostly west of I-45 and north of I-10 all morning. Thus far, everything has behaved nicely. That may begin to change as the cold front edges closer and we turn warmer and more unstable.

Obviously, with the tragic tornado event in the Dallas area last night, many folks will be a little extra on edge today. While the setup here in Southeast Texas is not as robust as it was in Dallas yesterday, it is still quite conducive for strong to severe thunderstorms and definitely the possibility of a few tornadoes. Whether you’re under the watch or not, you’ll want to have a method to receive weather warnings today and if a Tornado Warning is posted for your location, have a designated place to shelter in. No reason to panic, but certainly best to be prepared. We’ll be monitoring things throughout the day.

Hey all. Here’s a quick holiday weekend update on the possibility of severe weather Sunday in advance of a cold front.

NOAA’s Storm Prediction Center has upgraded the outlook for severe weather on Sunday for parts of the Houston area to “enhanced,” which means there is a greater likelihood of organized thunderstorm activity, some potentially intense. For areas marked in orange below there is a 30 percent chance of severe thunderstorms occurring within 25 miles of a given location. 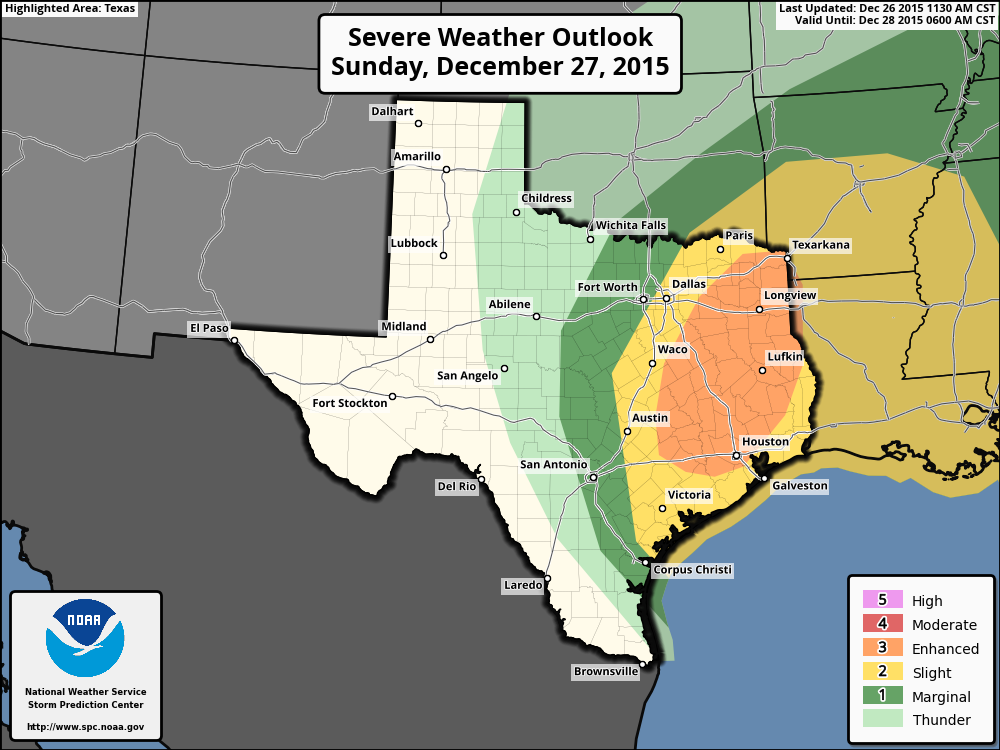