Lows have fallen only into the upper 50s this morning across the Houston region, bringing an uncharacteristically warm January morning to the city. But the warmer weather won’t last.

After several dry days moisture will surge into the area today as temperatures warm into the 70s. As this warmer, moist air moves inland this afternoon it may produce foggy conditions during the evening hours, warns the National Weather Service. A cold front will approach Houston tonight, and likely move through the metro region slowly, from about 10 p.m. to 4 a.m. Light rain is possible.

Although the front will dissipate the fog, in terms of rain it will not immediately clear things out. With the front hanging near, or just off the coast, expect Tuesday to be a cool, drizzly, rainy affair, especially across the southern half of the metro region. Highs will climb only into the mid 50s.

As any rains end, we’ll continue to see the movement of cold air into the region on Tuesday night and lows should fall to around 40 degrees. We’ll see another cold day, with clearing skies by Wednesday evening allowing for a very cold night.

Thursday morning’s lows will be the coldest of the week. (Weather Bell)

END_OF_DOCUMENT_TOKEN_TO_BE_REPLACED

Winter has raged back this morning, but we’ll see more moderate conditions by Sunday.

As expected, wind chills are in the 20s this morning with northerly wind gusts above 20 mph. It’s quite cold and winds should remain high during the daytime hours. Even though the Sun will shine most of the afternoon, highs will only climb to about 50 degrees.

As winds die down Friday night, temperatures will fall. Parts of the northern half of the Houston metro area will freeze, and while it’s difficult to say precisely I expect the demarcation line between freezing and not freezing temperatures to fall somewhere north of Interstate 10 in Houston. 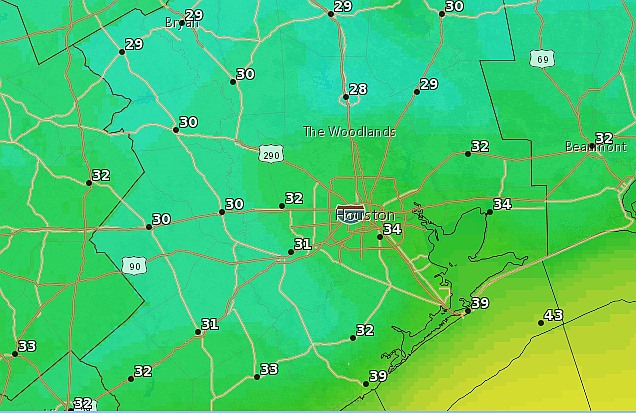 END_OF_DOCUMENT_TOKEN_TO_BE_REPLACED

Good morning. Please be careful of the foggy conditions this morning!

Very dense fog is affecting parts of Houston because of the warm morning temperatures — most of the city is seeing lows only in the low 60s. A dense fog advisory will remain in effect until 9 a.m. after which time it should burn off. Temperatures today should rise into the upper 60s before a strong cold front arrives this afternoon. Scattered thunderstorms are possible. After the front’s passage expect cool, windy conditions, with gusts of 25 mph or greater, this afternoon and tonight.

Temperatures should fall into the upper 30s on Friday morning, and although skies will clear out, north winds will remain brisk. Highs may not reach 50 degrees. All in all, a rather winter-like day.

END_OF_DOCUMENT_TOKEN_TO_BE_REPLACED

Temperatures are mild this morning, in the 50s for most of the Houston area, but a surge of colder air will move in tomorrow.

A weak cold front is sagging into southeast Texas (temperatures are in the 40s in Brenham with low humidity), and will stall along the coast later today. This could provide the impetus for some scattered showers this afternoon, but I’m not expecting much rain. Highs will be in the upper 60s.

A stronger front and upper-level low pressure system will move through Houston on Thursday. Before then highs should reach about 70 degrees. Although we can’t rule out the possibility of a few thunderstorms, right now the best dynamics for severe weather remain to the east, over Louisiana. Winds will pick up out of the north on Thursday afternoon as the front moves through, ending rain chances and likely clearing skies by sunset. Expect a breezy evening and cold night.

Temperatures will fall to about 40 degrees by Friday morning, and expect continued gusty northern winds as cold air dives down across the Rockies and midwestern United States into Texas. Highs will likely only be in the mid-50s under mostly sunny skies.

This will be a cold morning. Houston has a chance to see its second freeze of the season, although I expect most of central and southern portions of the metro area to remain just above freezing.