Just to tie a bow around Wednesday night’s cold front and severe weather: An EF-1 tornado was confirmed in Chambers County.

This map shows the path of the brief tornado that crossed I-10 NW of Cove TX last night around 10PM with the line of storms. The damage from the tornado was rated low end EF-1. #houwx #txwx pic.twitter.com/T0zdRwoEgG

Utility crews are working to restore power in The Lanai subdivision near Mont Belvieu and Cove, TX. NWS confirms a small tornado touched down here late last night. It was strong enough to blow out windows, blow down fences, and blow over a sales trailer #khou11 #htownrush pic.twitter.com/GObrfreg65

There was also a tornado in Colorado County near the Wharton County line. Texas City and Garden Oaks had straight line wind damage confirmed. The NWS was unable to confirm damage around Sealy, Katy, or Sugar Land, so they do not believe a tornado occurred in those locations at least as of Friday morning. More storm reports can be found here.

Today is our first morning officially in the 40s since April 16 of this year. We’ve hit at least 49° at Bush Airport as of 5:30 AM. We’re setup for a beautiful start to the weekend. Look for plenty of sunshine today and a little less wind than we saw on Thursday. High temperatures will rebound from our cool start into the upper-60s or low-70s.

Saturday begins our transition out of this autumn weather. Look for mainly sunny conditions again, but onshore flow will gradually develop through the day. We will start on a cool note with some scattered 40s well outside of Houston, but mainly low-to mid-50s for most. We’ll warm several degrees over Friday during the afternoon, with highs topping off generally in the mid-70s.

Saturday will absolutely be the pick of the two weekend days. Sunday should start partly to mostly cloudy. A weak front is expected to approach from the northwest again. Modeling has slowly trended a little higher with rain chances from this front from late morning into the afternoon. Unlike Wednesday’s front, we don’t expect severe weather, but it should still be able to produce scattered showers and perhaps a rumble of thunder as it passes through on Sunday. 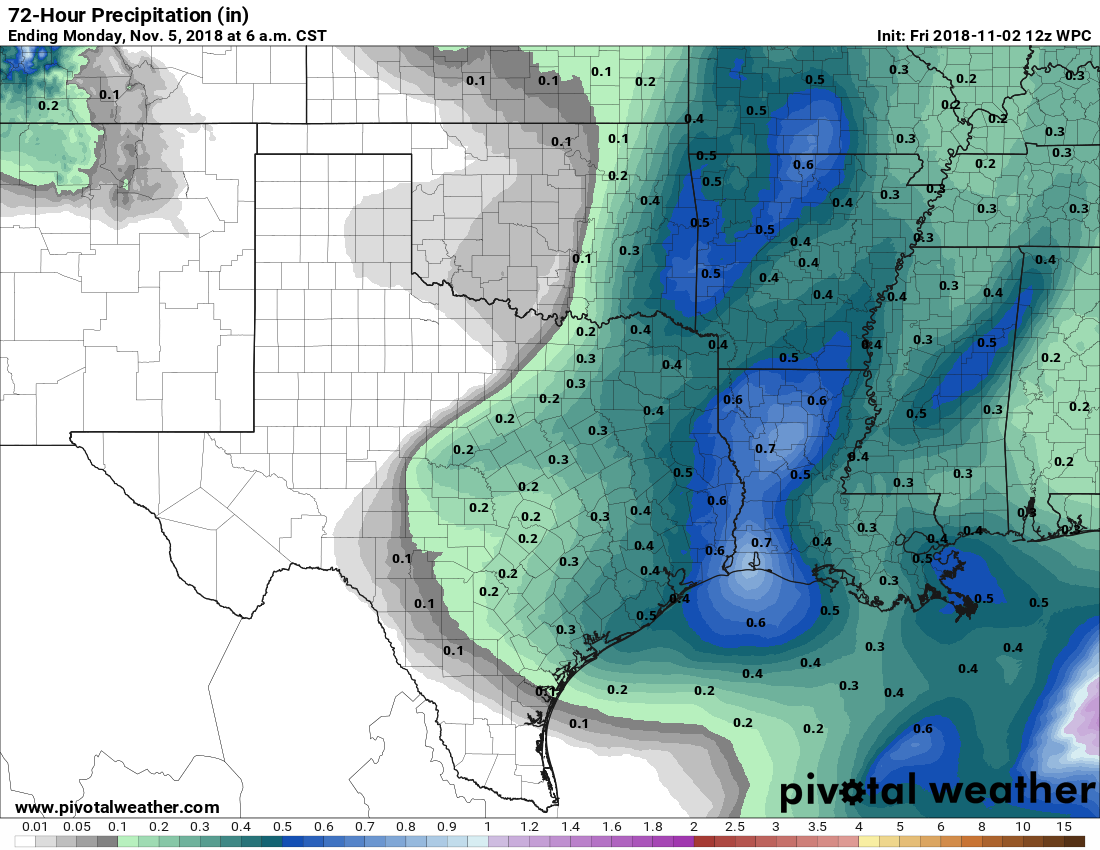 Total rainfall on Sunday should remain under a half-inch for most of the area. (Pivotal Weather)

Total rainfall will probably be under a half-inch for most folks. As of now, I wouldn’t be shocked if a few places manage to not see much of any rain at all from this either. We’ll start the day in the 60s and probably top off in the middle 70s once more, though if the rain focuses on midday, we could only manage to get to around 70 degrees or so.

Behind Sunday’s front, we won’t see much of any reinforcing cooler air. In fact, although Monday morning may start off a bit cooler than Sunday, Monday afternoon may see us push 80 degrees. Beyond that, the details of the forecast become fairly murky.

The weather from Tuesday into late week becomes subject to timing a couple disturbances and whether or not another cold front can get through Texas later next week. Weather modeling is coalescing around a pretty significant dose of cold air into the U.S. from Canada late next week, and I would expect that at least gets to North Texas by Thursday or Friday. Will it get to Houston? I like our odds, but weather modeling has been performing quite poorly in the medium range lately. So we have some questions to sort through over the next few days, trying to sort through cloud cover, rain chances, storm chances, and front chances in our neighborhood next week. For now, expect clouds, some sun, and a couple days of rain chances next week, with mild temperatures, mostly in the high 60s or 70s during the day and upper-50s or 60s at night. We’ll try to get some clarity on this over the weekend and give you an update on Monday.