We got through most of last night without any issues in Houston. Storms lined up well southwest of Houston near Matagorda Bay after midnight and have arrived across most of the metro area early this morning. 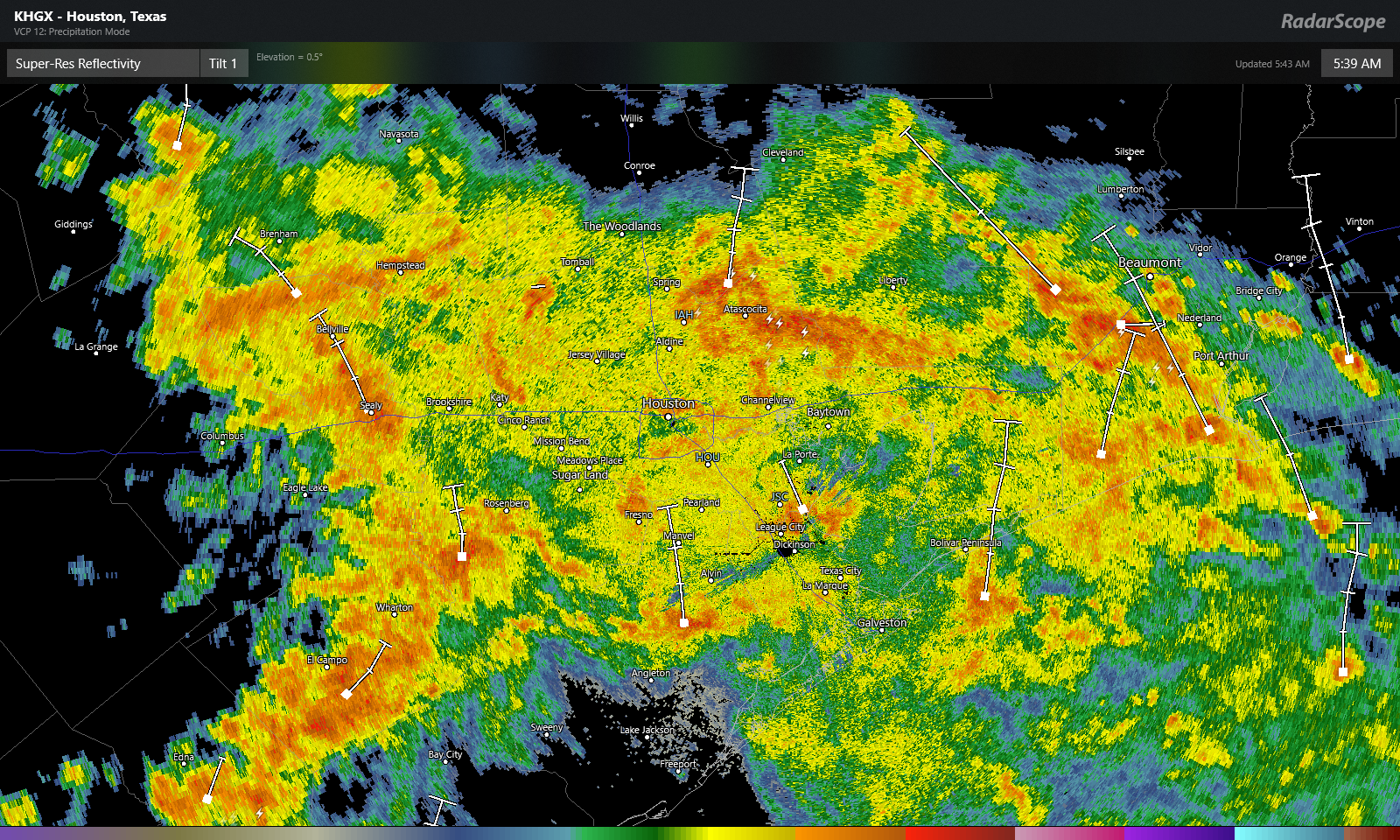 Radar at 5:40 AM shows widespread moderate to heavy rainfall across the Houston area. All this is moving slowly north and east and will be with us most of the morning. (RadarScope)

Radar as of 5:40 AM shows moderate to heavy rainfall across most of the area (with the exception of Freeport and north of The Woodlands). But everyone should see at least some rain through the morning.

As the day progresses, this rain will taper off or become more scattered in nature generally north and west of US-59/I-69. But heavy rain should continue into this afternoon generally south and east of there. A Flash Flood Watch remains hoisted for most of the area. We also have most areas south and east of US-59 in a “high risk” for flash flooding from the Weather Prediction Center today. 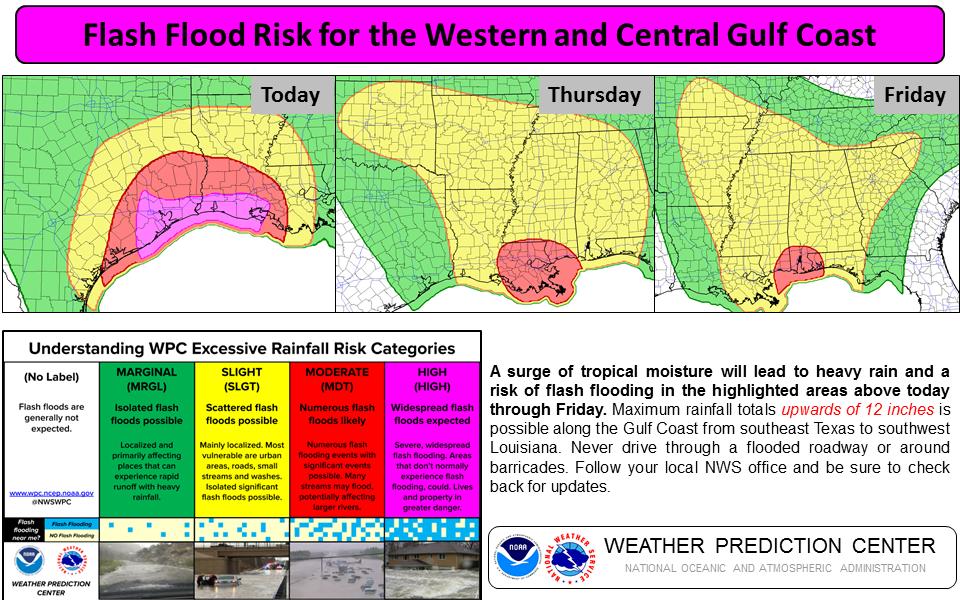 The Weather Prediction Center arm of NOAA has issued a “high” risk for flash flooding today for the southeast part of the area. (WPC/NOAA)

The WPC doesn’t hand out high risks easily, so that speaks to this system’s potential. A quick reminder from us: Please use caution when out and about today. It would be good to limit travel when you can on days like this, but if you are commuting or have to be heading out somewhere, be very careful and never drive through flooded roadways.

Total rainfall through this evening is expected to be on the order of 1 to 3 inches north and west of US-59. Some folks, particularly up in far northern regions (Conroe, Navasota, Cleveland to suggest a few) may see a bit less. The trouble spots are expected south and east of US-59. We expect 3 to 6 inches on average south and east of there, but some places will see higher amounts on the order of 6 to 10 inches or even a bit more. 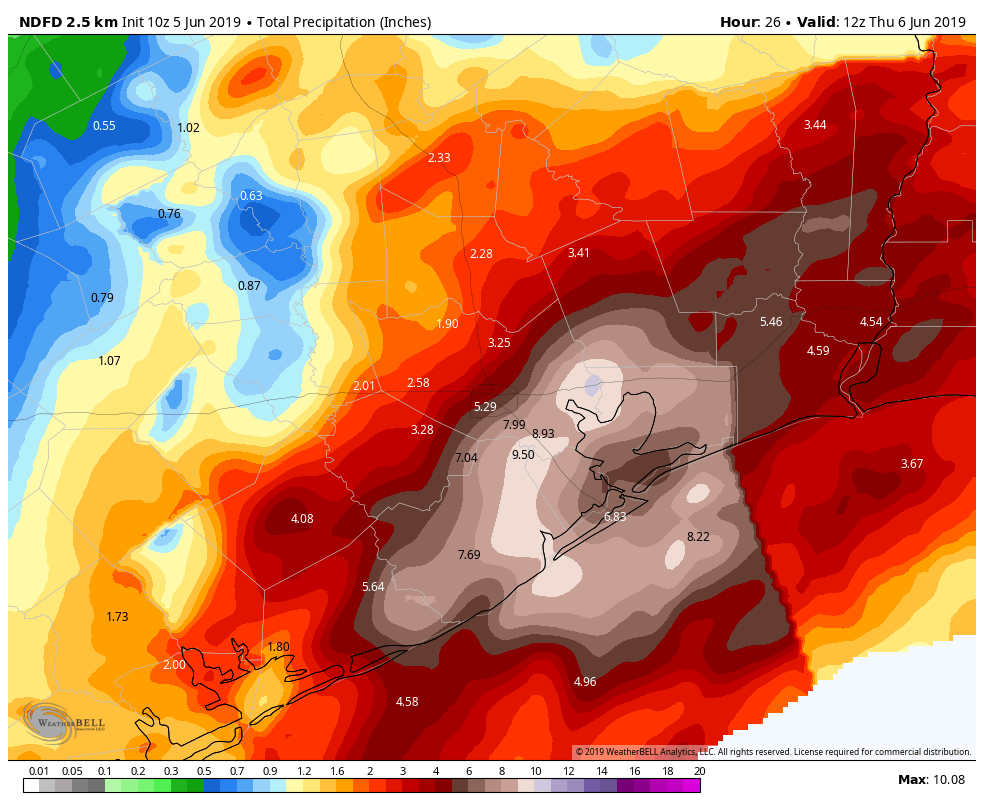 Through this evening, rainfall amounts will average 1-3″ northwest of Houston and 3-6″ southeast of Houston, with higher amounts likely near the coast and bays. (NWS Houston via Weather Bell)

There are still some uncertainties with how this will exactly play out, but in general this will work for today as a forecast. This outcome would likely cause a good deal of street flooding in parts of southeast Harris, Galveston, Brazoria, and Chambers Counties. Bayou or creek flooding is also possible, especially along Clear Creek or perhaps some of the bayous in southeast Harris County.

The bottom line today: Flash flooding, particularly street flooding is likely in areas south and east of downtown Houston at times today, especially through early afternoon. Some more serious street or even creek and bayou flooding is also possible in a few places, depending on exactly how much rain falls and how quickly it does. Rain should taper off a bit, or at least become more infrequent toward mid-afternoon.

We should enter into a bit of a lull this evening, with much of the area perhaps becoming rain-free. We expect storms to redevelop overnight once again, but this time they would probably be well east of Houston, perhaps into far eastern Chambers, Liberty, Jefferson, and Orange Counties, more toward the Golden Triangle. Still, some additional showers and storms will be possible in and around Houston tonight, with locally heavy rainfall possible.

Both Thursday and Friday will likely see scattered afternoon showers and thunderstorms develop. Given the state of the atmosphere on those days, heavy rainfall and some severe weather will both be possible. 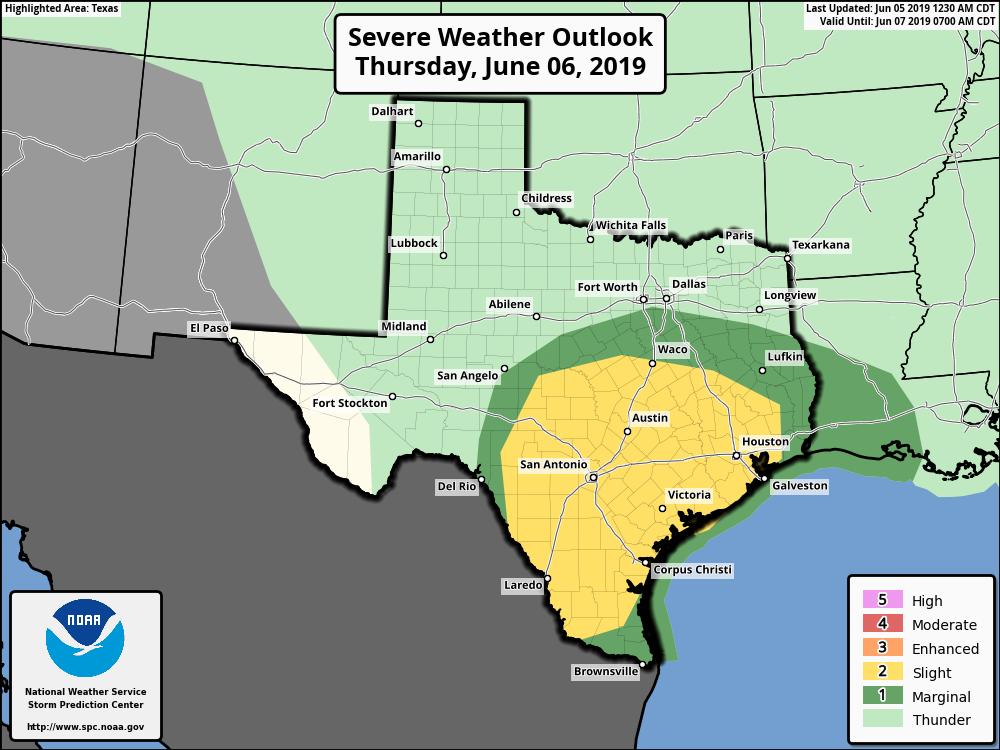 Most of the Houston area is in a “slight” risk for severe thunderstorms on Thursday. (NOAA)

Our area is in a “slight” risk (level 2 of 5) for severe storms tomorrow. Right now, Eric and I are mostly focused on today, so we will update you on tomorrow’s story in a little more detail later today. We still expect a mostly dry weekend right now.