Houston was promised a hot weekend, and Houston got a hot weekend. Here are how temperatures ended up at the major weather sites in the Houston area. Of note, the city’s official station at Bush IAH recorded its first 100-degree day of the year, and Hobby Airport set a record high on Saturday, breaking the old mark of 100 degrees set in 2015.

But then a funny thing happened. A rare late July front slogged through the area on Saturday night and Sunday, and this morning nearly all of the region is seeing demonstrably drier air.

With sunny skies we’ll see high temperatures reach the low- to mid-90s today, but with low humidity this evening should feel quite pleasant. Lows tonight will be in the 70s.

The combination of a front, high pressure easing off to the west, and moisture moving in from the Gulf of Mexico will make for a strange August week. While we’re normally used to highs in the upper 90s and sunny skies at this time of year, we’re instead likely to see partly to mostly cloudy days, with highs in the low 90s or possibly even the upper 80s. There will also be some healthy rain chances each day for the area, but as for accumulations we’re not looking at a total washout. Most of the region will probably pick up 0.5 to 2 inches of rain this week, with some localized downpours. 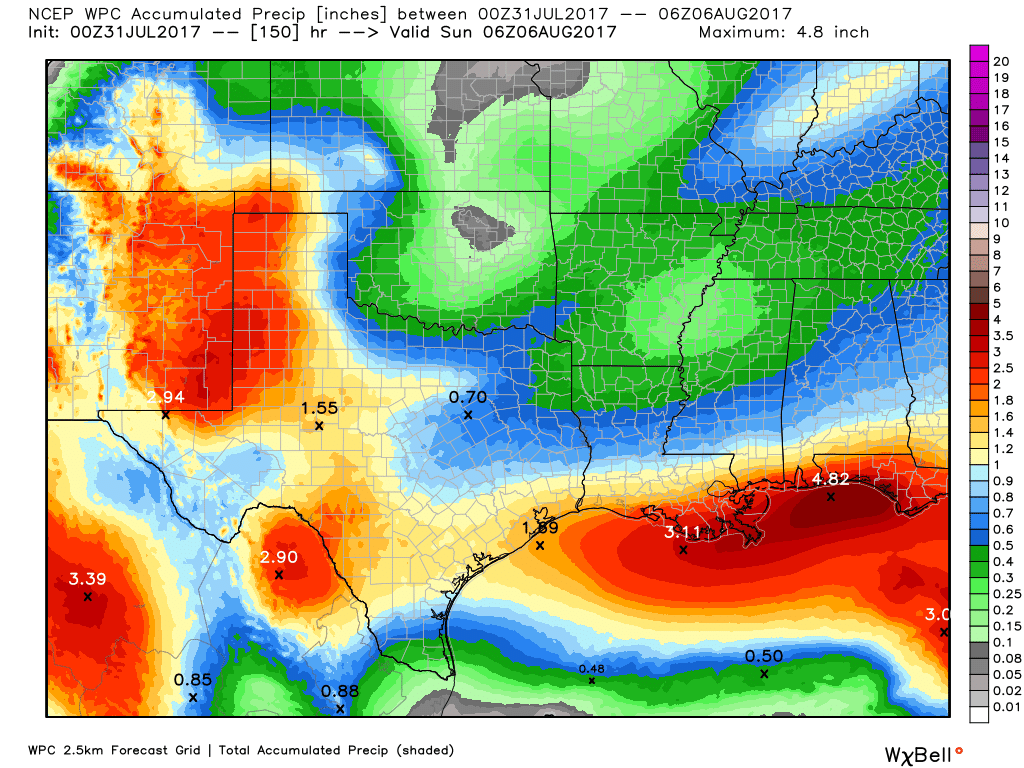 Most of Texas should receive some rain this week, but not an excessive amount. (Weather Bell)

Friday and the weekend

At this point I’m not sure conditions change a whole lot through the weekend. The region will probably remain in the low 90s, temperature wise, and you may have to dodge some showers if you plan outdoor activities. But still, after surviving Houston’s first really hot weekend of the summer of 2017, is that such a high price to pay?

Tropical Storm Emily has formed in the eastern Gulf of Mexico, but it will move eastward into Florida today and off into the Atlantic Ocean. It will have no effect on Texas’ weather.

Posted at 7:25am CT on Monday by Eric

3 thoughts on “After a super hot weekend, a surprisingly cool start to August”