Thursday was the hottest day of 2017 to date. Hobby Airport hit 99°, tying a record last set in 1965, while Bush Airport officially hit 98° on Thursday. Friday has a chance to equal or top it, but there is some good news.

Simply scorching. High pressure remains on top of Texas. This will both limit rain chances and maximize temperatures today. Expect temperatures very near where they were on Thursday, with highs in the upper 90s to near 100° in and around Houston. Minimal relief at the coast, with Galveston through Matagorda seeing highs in the low-90s Friday afternoon. 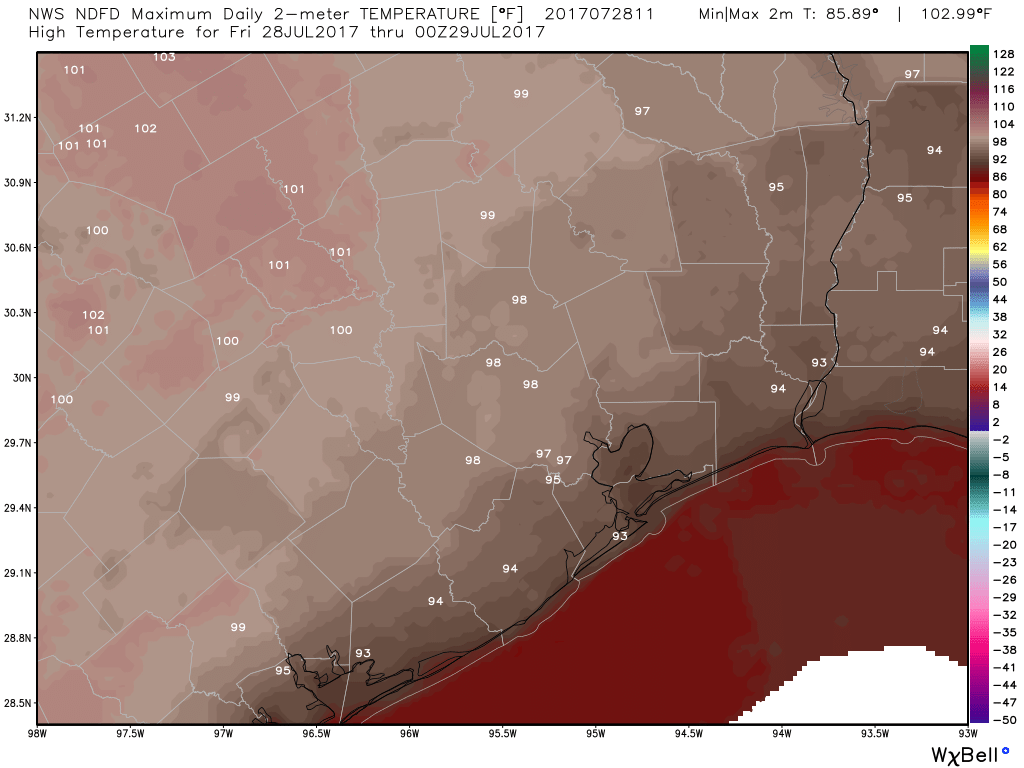 There won’t be too many showers around today, but as we saw on Thursday, you could conceivably get one or two that pop up in parts of the area (most likely south of I-10) and dump a couple inches of rain in a short time. But the majority of the region will stay dry.

Combined with a bit of humidity, it will again feel uncomfortably hot today. Heat advisories are unlikely, but regardless, you should take it easy outside today and tomorrow. 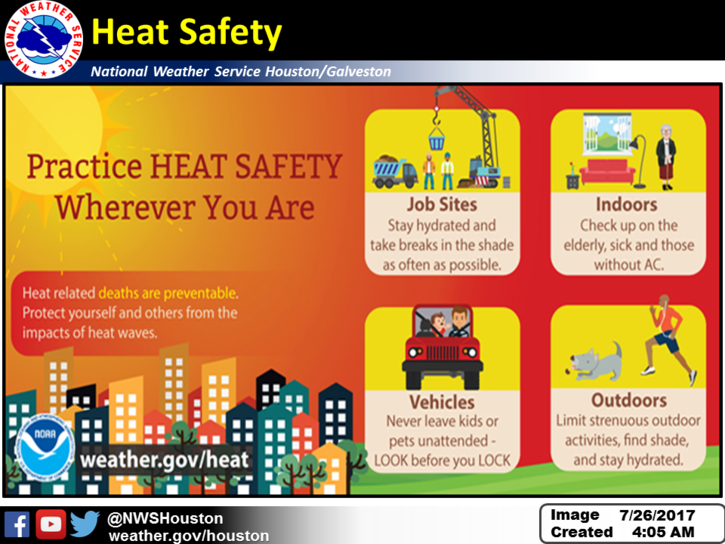 Saturday will be similar, although the chance of showers may be just a tick higher, but temperatures will be fairly close to where they end up today. The best chance of showers will be east of I-45 and in Louisiana on Saturday. Still, a handful of downpours may occur around the Houston area Saturday afternoon or evening, and storms east of Houston could be a bit on the strong side.

We don’t often get to talk about cold fronts in summer in Southeast Texas. As Eric has been discussing this week, yes, technically a cold front will approach the area late Saturday or Sunday morning. But it won’t be anything like the fronts we see in late fall, winter, and early spring. Yes, some showers and storms will be possible Sunday as the front finishes passing through. But temperatures will only drop a couple degrees. Still, it’s a front, and you should figure on more like lower 90s than upper 90s for high temperatures Sunday.

Monday looks to be a slightly quieter day, with ample sunshine and extremely low rain chances. Though I’d be hesitant to say it will feel comfortable Monday, weather models are implying lower afternoon humidity. So, as summer days in Houston go, Monday shouldn’t be too bad at all. By Tuesday, rain chances sneak up just a little. Beyond Tuesday, the pattern looks to turn more unsettled. Details are quite uncertain right now, but we should see some low-end mid-summer heat (low-90s?), occasionally punctuated by afternoon showers and storms over parts of the area. We’ll hone in on the details as we get closer.