Good morning to you after a fine Memorial Day weekend, when we rememberd those who died serving our country. We are all indebted to all of them. Today I’m going to take a final look at last week’s flooding, and what lies ahead.

As Braniff explained this weekend, Houston saw two days of large mesoscale convective systems (MCS) that were driven by backbuilding storms. On Thursday the heaviest rains were concentrated over the Brenham area, and on Friday the region saw more widespread rainfall. Here’s a false-color satellite view of the hard-hit northwest part of the Houston metro region on Saturday afternoon that shows the dramatic swelling of the Brazos River, and flooded watersheds between Katy and Hockley. Click the image to enlarge. 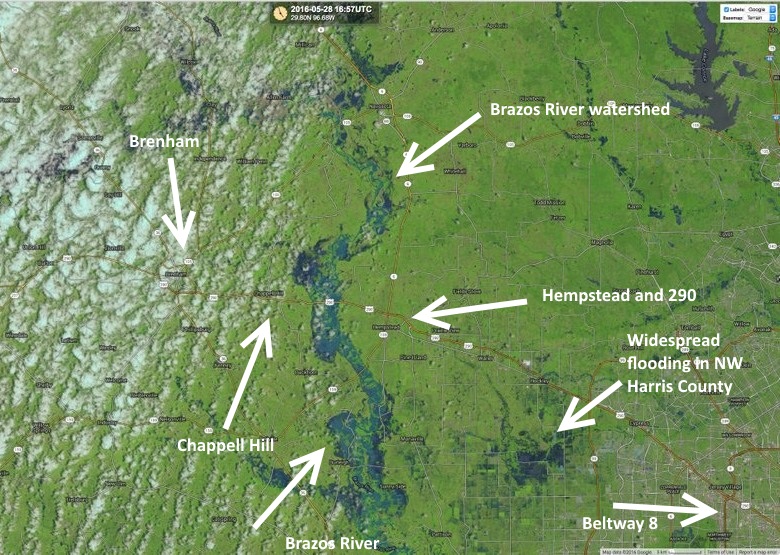 Unfortunately these rains caused major flooding problems, and will continue to do so this week. Most notably, the Brazos River at Richmond rose to a modern record of 53.01 feet early this morning, and should crest later this afternoon. This is flooding many areas near the river in Fort Bend County that haven’t flooded before. 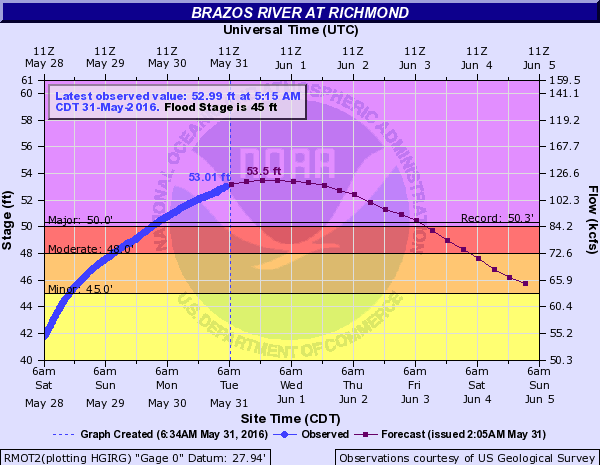 Similarly major flooding has occurred across the entire San Jacinto River basin, but the river has crested and is starting to slowly fall. According to Jeff Lindner with the Harris County Flood Control District, major flooding will continue today into the middle of this week, with water in areas where flooding does not occur often, including portions of Humble and Kingwood. Improvement will be slow.

For information on all rivers and lakes in the greater Houston area, this is a great resource.

So what’s next? Houston enjoyed a few mostly dry, warm days during the Memorial Day weekend, but now we’re heading back into a warmer period.

There’s the potential for some showers and thunderstorms this afternoon across the Houston area, but a sea breeze will be battling some factors mitigating against widespread showers. Highs today should be in the upper 80s, and if this afternoon is mostly sunny the city could hit 90 degrees.

An upper-level storm system is expected to move into Texas and stall out by the middle of this week. This will create the lift needed in the upper atmosphere to squeeze showers and thunderstorms out of our moistening atmosphere. How much rain are we talking between Wednesday and Sunday? I’m going to go with widespread accumulations of 2 to 5 inches, but we could potentially see a fair bit more than that in some locations where the heavier storms slow down. 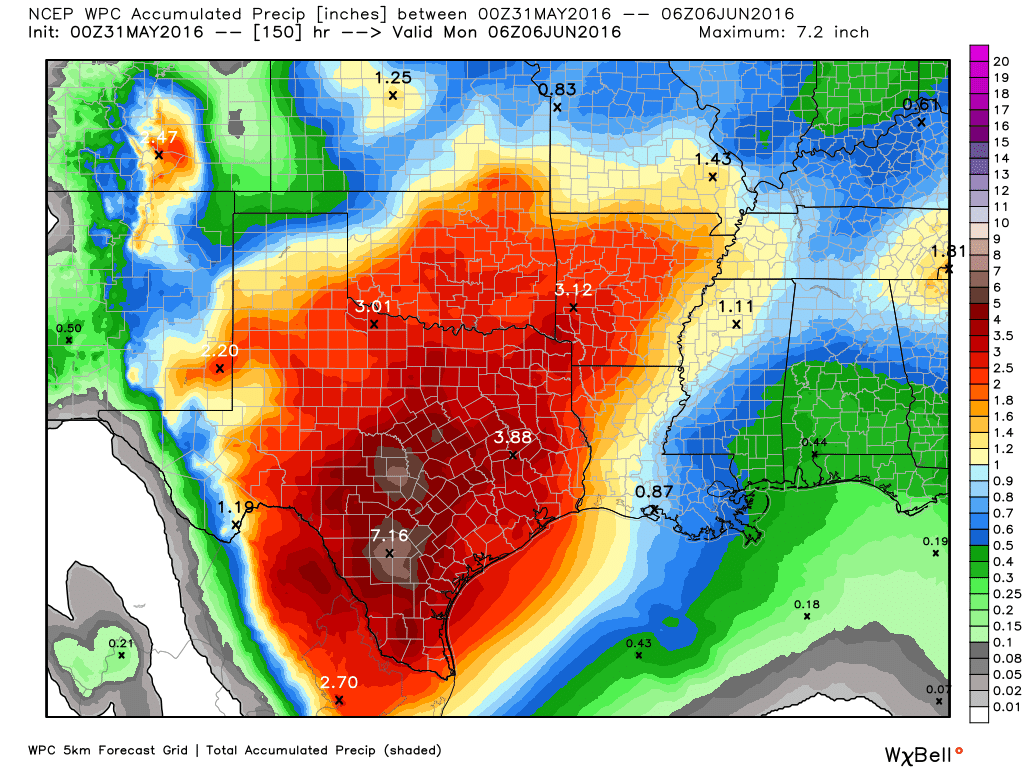 As you can see in the rain accumulation forecast for this week, from NOAA, the upper-level low is mostly likely settle over central Texas and the Valley. This is going to bring problems to a state that is already waterlogged after one of its wettest springs ever. For Houston this will be especially problematic if the heavy rains line up west of the city or hard hit areas northwest of Houston, affecting the Brazos River, or the San Jacinto River watershed. Areas of central and southeast Houston can handle more rain at this time.

It still looks like the region will enter into a comparatively drier (and hotter) period next week, but first we’ve got to get through the next several days.