Before I get into the weather, I really just want to say how floored Eric and I both are by the support you’ve shown us as we kicked off our annual fundraiser this week. We are truly humbled, and we cannot thank you enough.

Jumping into the weather, it’s pretty benign around here, and it looks to stay that way into next week, though with some changes that we’ve discussed through the week.

After tying a record high temperature yesterday (85°), we’re likely to end up in a similar spot today, with low to mid-80s for afternoon highs. Today’s record is 86°, and we’ll see if we can make a run for that. We’ve got some lingering fog this morning that should dissipate by mid-morning or so. We will at least mention the chance of a shower, mainly south and west of Houston. It would seem that Brazoria, Fort Bend, and Austin Counties (and points southwest of there) stand the best chance at seeing some raindrops this afternoon, but don’t be entirely shocked to see some brief rain anywhere.

After a mild, muggy morning with lows in the 60s, look for a mix of sun & clouds tomorrow, with highs once more in the mid-80s. The record high tomorrow is 89°, which should be safe. I wouldn’t entirely rule out a few passing showers tomorrow, though they would be the exception, not the rule. Onshore winds could gust close to 20 mph or so over Galveston Bay on Saturday afternoon. 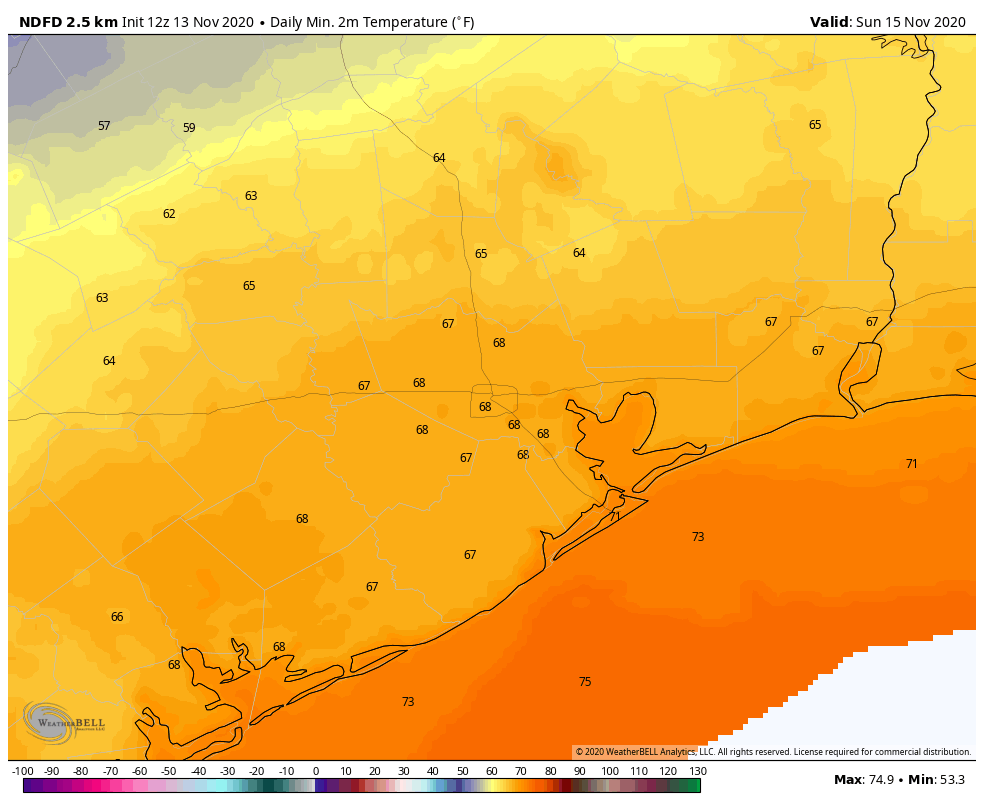 Sunday morning’s low temperatures are going to feel more like early autumn, with some places struggling to get below 70°. (NOAA forecast via Weather Bell)

With building humidity, look for a warm, muggy night for November. Lows may not dip below 70° in some spots tomorrow night.

The challenge with Sunday’s forecast will be timing the cold front. Model forecasts have sped up some since yesterday, with most models bringing the front through during the mid-morning hours. The good news from a forecast standpoint is that what you experience on Sunday should be mostly the same regardless. Look for the muggy, warm morning noted above to continue. We’ll see clouds and some sun. Highs on Sunday should manage to get to about 80° (perhaps only upper-70s in some spots with a faster front), but with the front coming through sometime in the morning, it will feel a lot more comfortable by afternoon. The front itself may carry a narrow line of showers which would be unlikely to amount to much more than a tenth of an inch or so of accumulation. We’ll see clearing skies Sunday afternoon & evening, along with a modest offshore breeze, perhaps gusting close to 20 mph over the bays.

Monday and Tuesday will feature chamber of commerce weather. Look for sunshine, low humidity, highs in the mid-70s, and lows in the 50s, with perhaps even some 40s in outlying areas on Tuesday morning. 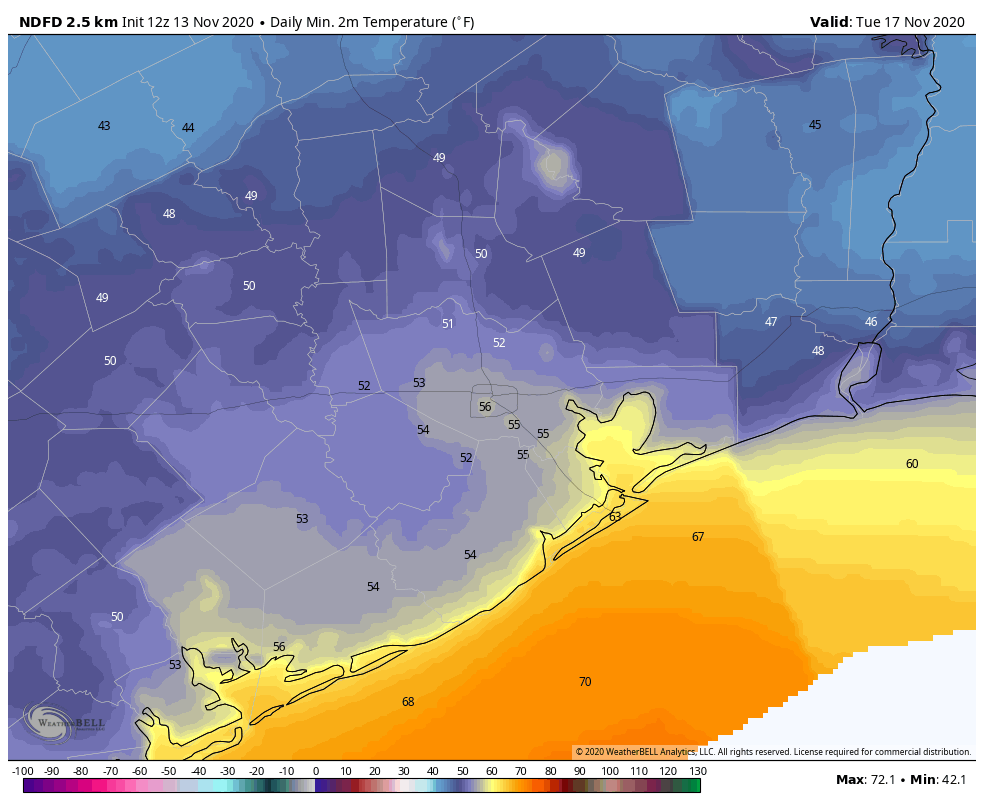 Look for onshore flow to return by midweek, and after a nice Wednesday, we’ll see humidity rev up a bit closer to the weekend. It’s also possible we are talking 80s again by next weekend. And barely any chance of rain. Speaking of…

Last week’s drought monitor report had about 8.5 percent of the Houston region classified in drought. That has ballooned to over 40 percent this week. 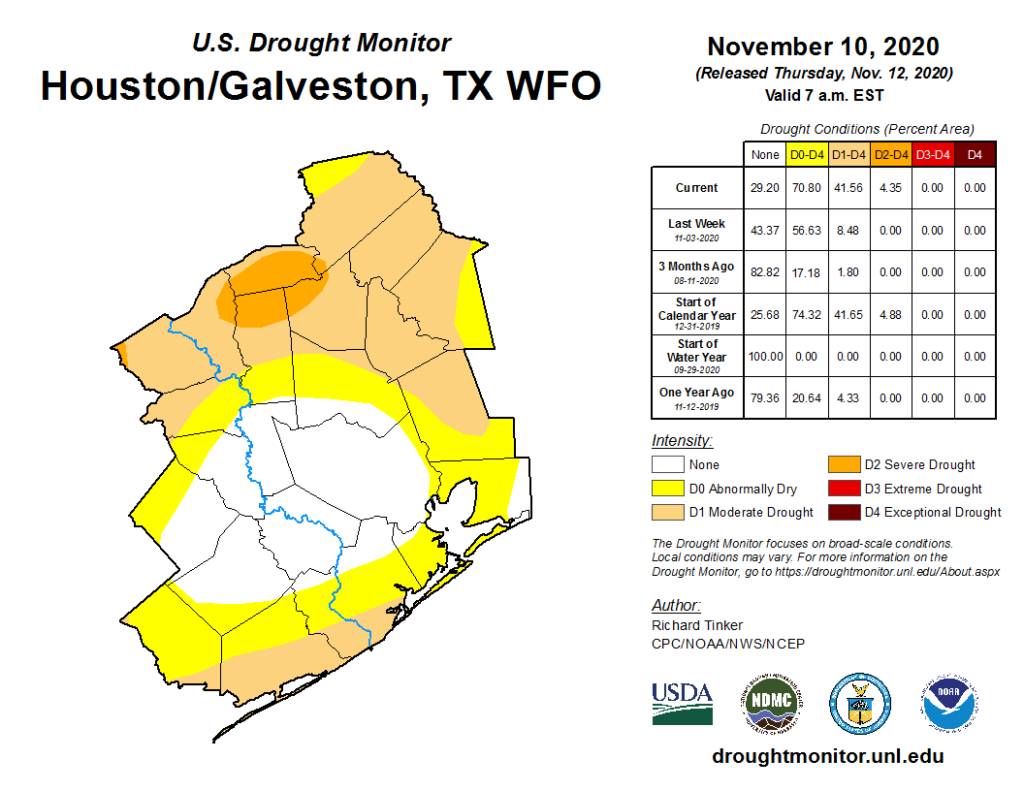 Drought has expanded to about 40% of the Houston region, and it will not get any better over the next week or two. (Drought Monitor)

While Harris County is not in drought at this point, we are basically surrounded, including even a pocket of “severe” drought over Grimes, Walker, Madison, and Brazos Counties to our north. If you’re curious about the rest of the state, nearly 60 percent of Texas is classified as in drought, with about 20 percent (mainly in far west Texas) in extreme or exceptional drought. Droughts are one of the worst types of weather events to communicate because they can wreak havoc and are usually painfully slow to evolve. It’s pretty obvious right now though: We are seeing drought expand, we have little hope for meaningful rain over the next 10 days, and we are firmly in a La Niña, which is often a harbinger of a dry winter in the South. I know we have some farmers and other folks sensitive to drought that follow us. We are not yet ringing the alarm bells on a severe, long-duration drought for the region, but we are telling you that the players are trying to line up on the field. We’ll keep you posted.

I just want to close with a quick note on the tropics. Invest 98L, the area tagged by the National Hurricane Center with a 90 percent chance of development is likely to become a depression or Tropical Storm Iota today or tomorrow in the Caribbean. 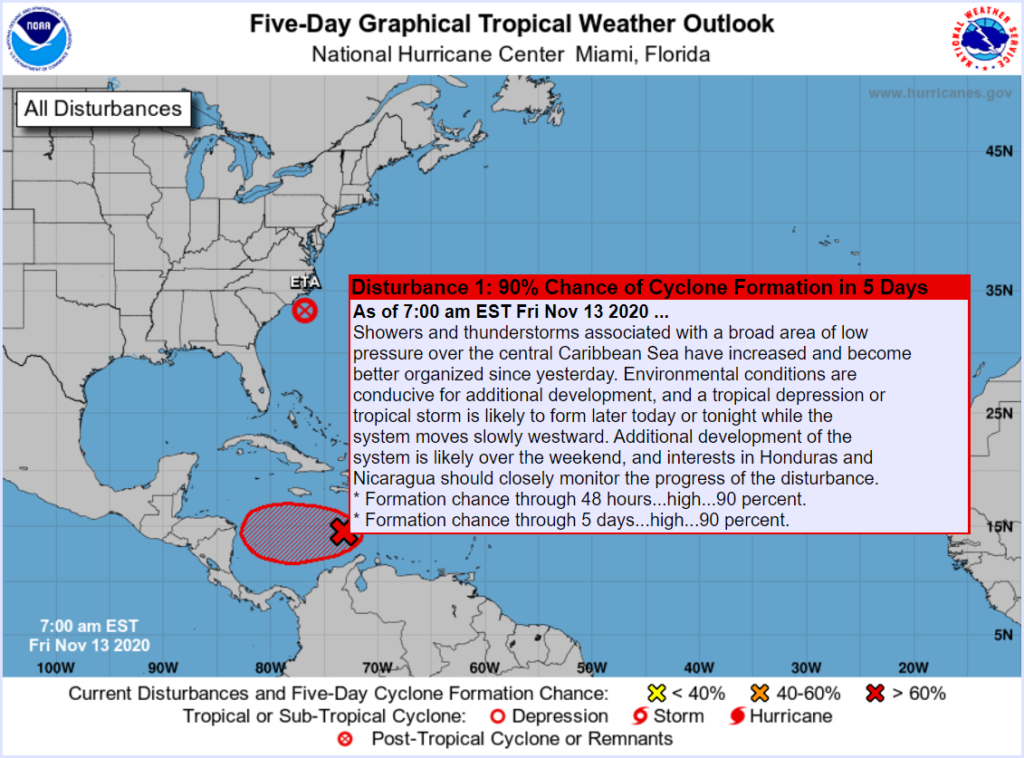 We are likely to see a Hurricane Iota in the Caribbean by Sunday or Monday. It’s not a threat to the Gulf, but it will likely impact areas in Central America that were just severely impacted by Hurricane Eta. (NOAA)

While it won’t be a threat to the Gulf, there is a chance that this one again rapidly intensifies and slams into Central America, not far from where Eta just hit, further cementing 2020’s status as an infamous hurricane season.