We always seem to lock into a dreary, gray pattern this time of year for a period of time, and this year, while a bit more broken up, looks similar. So enjoy today, which will be delightful!

Beautiful. Expect sunshine and really stunning weather for late December. We’ll do lower 60s this afternoon, with a few spots maybe in the upper-50s. Other than a modest breeze and perhaps a few clouds late, it will be a calm, lovely day.

We’ll be setting up another storm system over the area beginning tonight. While this one should not have nearly the impact of the storm we just got through, it will be a bit drawn out.

Clouds will increase tonight, with low temperatures probably being reached earlier in the evening than Thursday night into this morning. We should do mid- to upper-40s for lows.

Available atmospheric moisture increases from about 0.7″ this evening to almost 1.5″ by Sunday morning, meaning increasing rain chances through the period. (Weather Bell)

I’m hesitant to call it a washout right now, but I do think there will be a fair bit of light or steady rain and showers around during much of Saturday. Moisture begins to increase tonight, and it will further increase tomorrow and tomorrow night. Rain chances will probably start near the coast on Saturday morning and spread inland during the afternoon and evening.

The Houston area is going to be on the cooler side of the boundary responsible for helping disturbances pass through this weekend. That will allow temperatures to end up colder than usual. This will be a chilly rain. Highs on Saturday shouldn’t get much past the 50 degree mark, if they even get there at all. Saturday night will see continued showers or light rain. Temperatures won’t go very far. Expect lows in the mid-40s.

Off and on rain continues Sunday, which will be much like Saturday, as high temperatures don’t scoot beyond the low- or mid-50s. Finally, a more aggressive push from the west by a disturbance on Monday morning will begin to unwind this storm. This looks like a much lighter version of Thursday’s system, with showers and thunderstorms possible ahead of and along the front Monday morning. We don’t expect much heavy rain or any severe weather right now. This should be a more benign front, with rain chances ending probably around Noon, give or take. 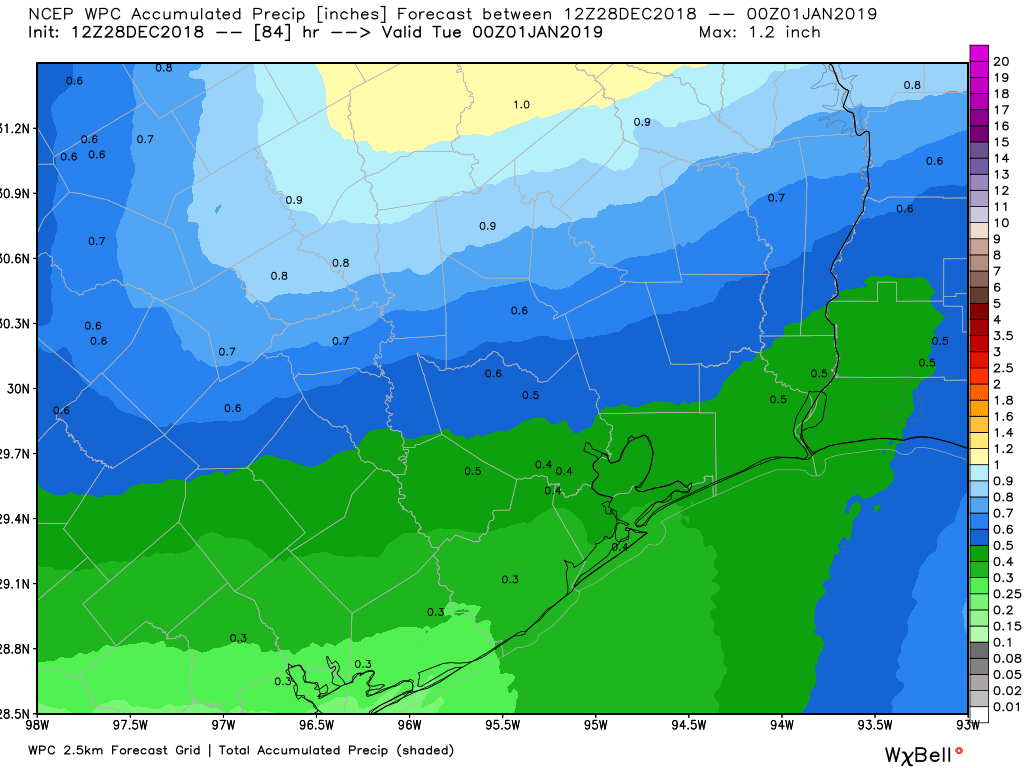 Total rainfall between Saturday and Monday morning should average a half-inch or so, with a few spots, mainly north of Houston, perhaps seeing up to about an inch of rain. (WPC via Weather Bell)

Depending on how quickly skies clear out Monday afternoon, we may be able to sneak above 60 degrees. The better news in all this? If the timing of these disturbances is able to hold through the weekend, expect no issues for New Year’s Eve festivities. Right now, it should be a dry and cool Monday night, with temperatures probably in the upper-40s around Midnight.

After what should be a nice, mild New Year’s Day with upper-50s to near 60 degrees, we see another storm system develop over the western Gulf of Mexico, which will bring us yet another day of dreary weather Wednesday before a cold front probably ends the rain chance on Thursday. There are signs that this air mass will be the coldest we’ve seen in a couple weeks. Our last morning in the 30s was back on December 16th, and it seems like we will have a pretty decent shot at 30s once again by Thursday or Friday mornings. We still have a good bit of time between now and then though, so the usual caveats apply. We will keep you posted. Eric should have an update for you on Monday. Have a safe, happy, and healthy New Year’s weekend!