Good morning! The worst of Wednesday night’s and Thursday’s morning’s thunderstorms are now moving eastward, and the remainder of the storms should be off the coast by around 10 or 11am this morning. After several days of 70-degree weather, winter should now feel more like winter in the greater Houston area.

Storms on Wednesday and Thursday brought a healthy amount of rain, with 1-3 inches generally, and a few reports of damaging winds. This morning, there are a few high-water sites on area roadways, but for the most part no major concerns. Temperatures have fallen into the mid-50s as the front moves through, and as rains end later this morning, we should see some clearing skies later this afternoon that will allow highs to get up to about 70 degrees. Lows tonight should drop down to about 50 degrees. 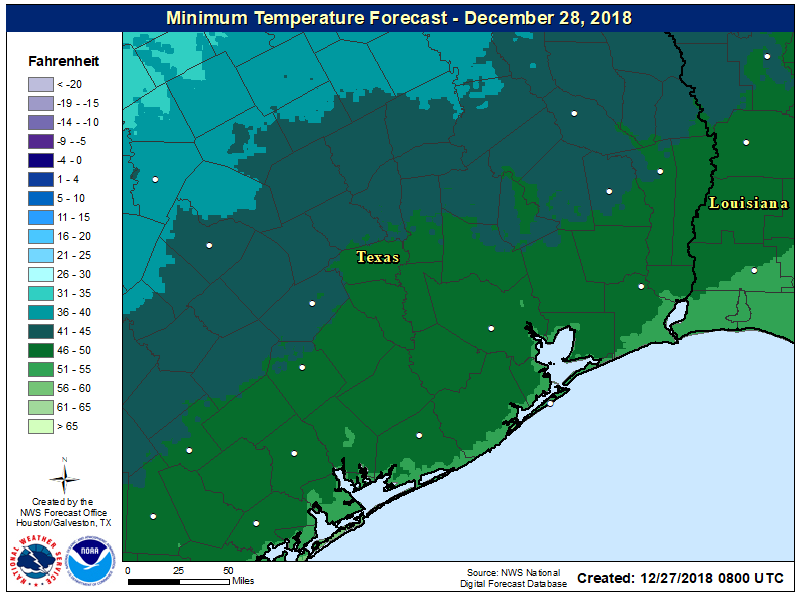 This still looks to be the pick of the litter for this week, and perhaps next as well. Look for highs in the mid-60s, with mostly sunny skies, and light winds. This will probably be the last time we really see the Sun in 2018.

Kind of a messy pattern, with cooler air near the surface and warmer air above. The net effect should be periods of steady light to moderate rainfall—not the intense convective rainfall we see during tropical downpours—on both days. We may see accumulations of up to 1 inch of rain during these days days (give or take, of course). This should preclude any travel problems. Highs will generally run in the 50s, with lows in the 40s, under gray skies.

This is going to be a tricky day to call, and overall confidence right now in the forecast is low. We can be fairly confident in the day starting out gray and cool. Highs may push up to around 60 degrees, with more of the steady rainfall Houston is going to experience over the weekend. However, a stronger cold front is due to arrive Monday night or early Tuesday, and the timing and circumstances of this front are going to matter to New Year’s Eve. Right now it’s hard to rule out rain, winds, or cooler weather for those out and about celebrating. Hopefully we can get some clarity on this forecast by tomorrow’s post.

New Year’s Day and beyond

The start of the new year looks to be cooler, with highs in the low 50s, and partly to mostly sunny.

8 thoughts on “Storms ending, cooler weather to close out 2018 for Houston”