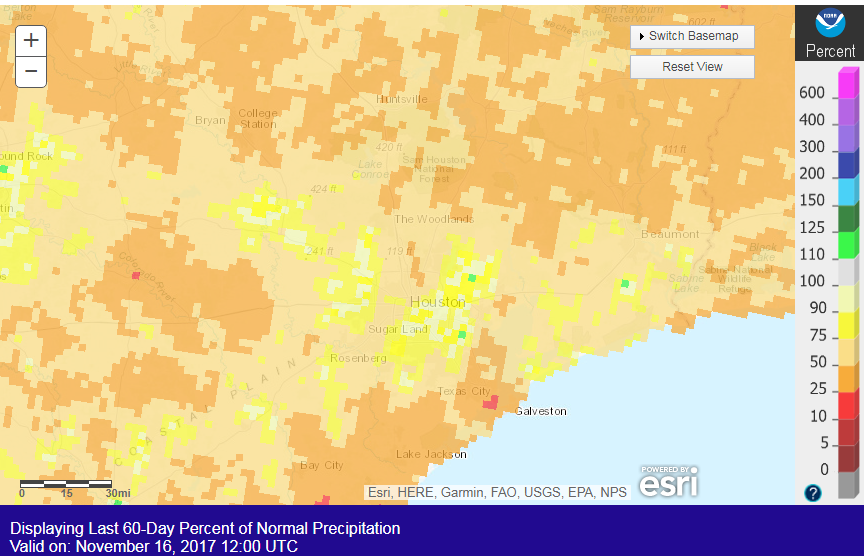 Over the last 60 days, rainfall has averaged about 50-75% of normal in most of Southeast Texas. (NOAA)

In fact, much of Texas has been dry. And yes, we can start using the “D” word a bit more liberally in Texas. That word is drought. With precipitation over the next two weeks likely to average below normal in most of Texas, and with drought areas expanding, we’re likely to see talk of drought show up a bit more often.

Following on from yesterday, latest Drought Monitor update has TX up to 15.3% moderate+ drought from 8.8% a week ago, mostly in N & C/W Texas. #txwx pic.twitter.com/k8NV8sau4G

Harvey obviously delivered enough rain to hold drought back in our area for a good while. But with Harvey becoming a distant memory in the water system, and Texas’s historical reputation of going from one extreme to the other, we can start discussing this potential. Areas in interior Texas less impacted by Harvey are already there.

So with that setup, let’s dive into the forecast.

There’s not much in the way of fog to start today, thanks in part to more cloud cover. So expect a pretty benign Friday: Clouds and some sun. We’ll warm up into the low 80s in most spots this afternoon away from the coast.

As mentioned pretty clearly above, the weekend front won’t carry a lot of punch with it, so only a few showers are expected as it moves through. Most people will stay dry, though a few could see some raindrops. But the front will cool us off! Timing looks as though the front crosses the area from northwest to southeast beginning around midday on Saturday, clearing the coast by Saturday evening. Before that, expect high temperatures around 80° or in the low 80s once more. Behind the front? Low temperatures Saturday night into Sunday morning will be around 50° in the city, 40s in the suburbs, and mid 50s along the coast. 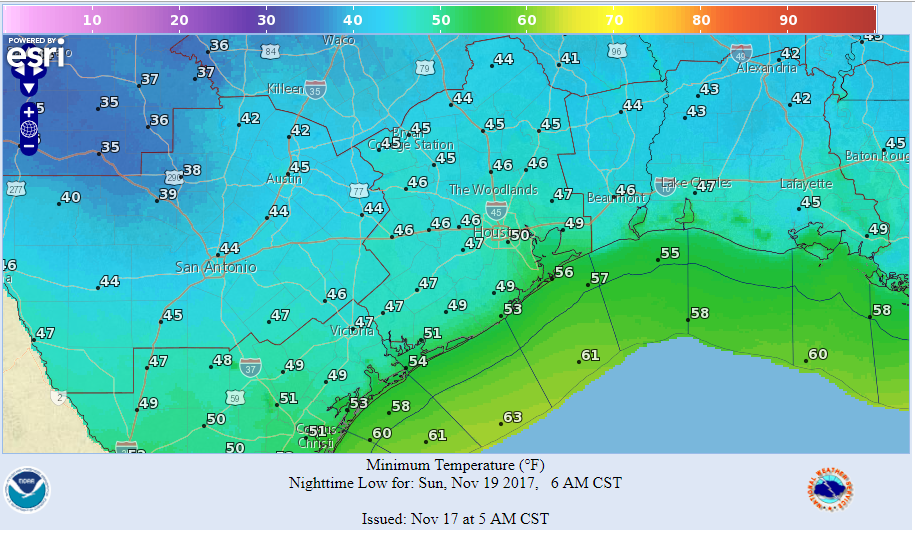 Sunday looks great with highs in the mid-60s.

Eric’s been talking about the high degree of uncertainty next week. It still exists, but we are slowly starting to gain a little clarity today.

Monday should be fine, with sunshine, clouds, and more 60s for highs. Tuesday sees a transition back to warmer, slightly more humid weather and a shower chance. This is where the models had really split off into a couple directions, with one camp indicating a few periods of rain and storms possible into Wednesday, and the other camp mainly dry. Today, it looks like the drier camp has an edge, and we’ll gradually reduce shower chances through the day on Wednesday, allowing us to clear out by Thanksgiving Day. As of right now, travel doesn’t look bad at all. There’s still a lot of time til Wednesday, so confidence in this forecast is still only moderate.

Temperatures on Thanksgiving Day should be seasonable, if not a little cool. For now, we’ll call it 40s in the morning, 60s in the afternoon. The weekend looks seasonable and quiet right now. We’ll obviously keep you posted!

6 thoughts on “Another front without much fanfare for Houston”