After a stormy Thursday, though certainly one that could have been worse for Houston, I’m hopeful for a more optimistic situation today (though not one where rain chances magically disappear unfortunately). A Flash Flood Watch remains posted into Saturday evening, so we’ve got another day and change to stay on guard. Let’s break it down.

As of 6 AM, there are no Flash Flood Warnings in effect in the area. We’ve done okay overnight, without much rain to report. There’s a good amount of heavy thunderstorms sitting over the Gulf this morning, slowly creeping northward. 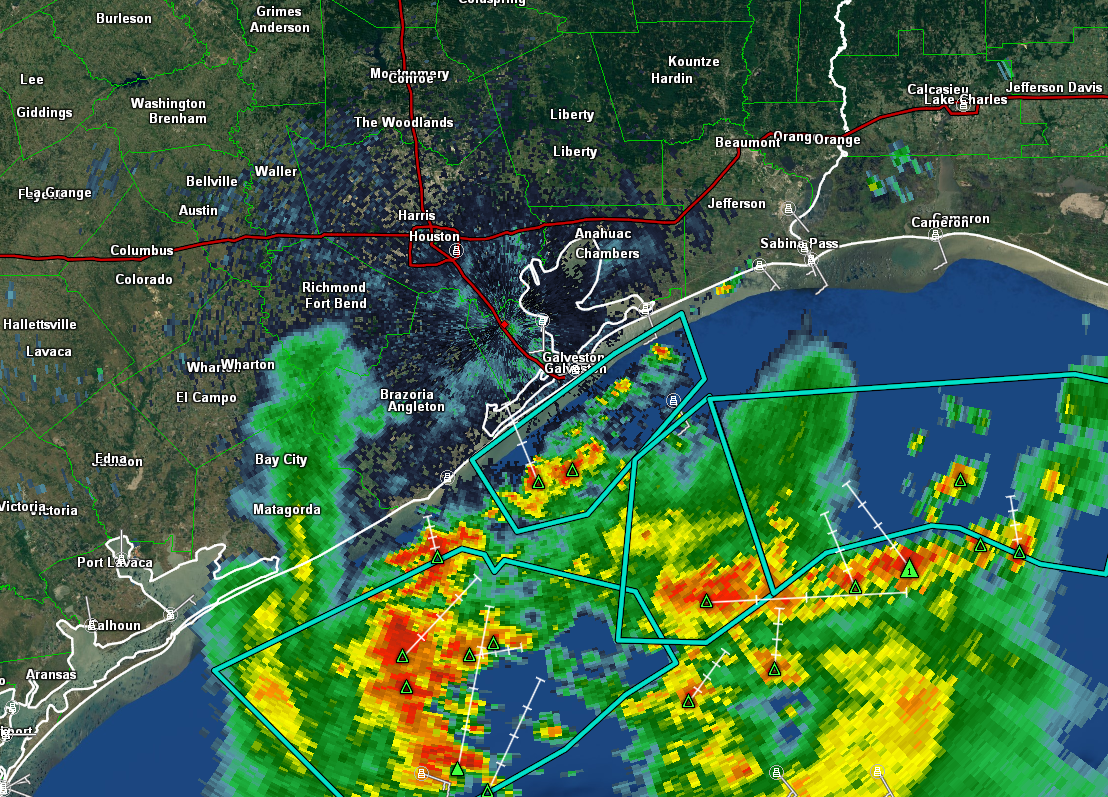 Radar as of 6 AM shows heavy rain offshore, but mostly quiet weather around Houston. (GRLevel3)

This radar shows two things that matter. First, if you drew a line due south from about Katy, the majority of the precip lines up east of that line. The rain is mostly creeping north or northeasterly. This means the bulk of it is likely to miss western  parts of the Houston area to the east.

Secondly, because you have this barrier of heavy thunderstorms over the Gulf, you’re basically cutting off the moisture feed into our region. So the amount of available moisture around Houston is lower than it has been, and it will take a little time for things to “recharge” here.

Now, with all this being said, there are still problems here. First, areas east of Houston have been pummeled the last couple days. 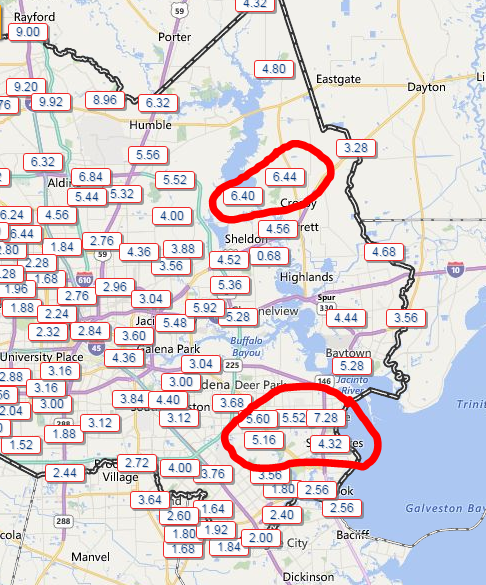 Both northeastern and southeastern Harris County have seen impressive rainfall totals the last two days. La Porte has seen over 7″ since Wednesday. Crosby has seen close to 7″ of rain also. So despite the good news for folks impacted by the Brazos and people up in The Woodlands, folks in the eastern parts of the area can’t handle much rain now either. So street flooding and possibly some bayou flooding is a very good possibility in these areas with any heavy rain today. If you live in Baytown or La Porte especially, you’ll want to be aware of this today.

Secondly, I expect showers to gradually creep north, so though it’s quiet now, I do think we’ll see some rain and storms around this morning, just hopefully well behaved.

As we go into this afternoon, I do expect that we’ll see showers and storms around once again. The latest HRRR model shows these scattered showers and thunderstorms around after morning rains over the Gulf work inland and mostly east of the area.

Similar to the last few days, it will likely be a matter of location and luck how storms shake out this afternoon. Most areas would only see a little rain, but a couple areas may see 1-3″ of it in a relatively short time, as whatever does develop will probably be slow moving or trigger new storms nearby. We simply don’t know where those areas will be right now, but it could be anywhere around Houston, including the north, west, or east hard hit areas. We’ll monitor throughout the day. It won’t take a lot of rain to re aggravate flooding in Northern Harris County or worsen things again along the Brazos, so keep an eye on things today, and we’ll update as well as needed.

Looking at a loop of water vapor imagery, the “swirl” over interior Texas is the storm responsible for our misery. Until that system either falls apart or exits, the chance of storms remains in the forecast. The good news is that it’s moving, albeit slowly.

By overnight tonight, this upper low is expected to be between Houston and San Antonio. By morning, it’s expected to slither south of San Antonio. So that chance of thunderstorms will remain with us tonight into tomorrow. The storm is going to weaken tomorrow, slowly, so support for a deluge will slowly disappear. By Sunday, coverage of storms will be fewer than Saturday and by Monday fewer than Sunday. The best chance for storms will gradually retreat southwestward also, so that by Sunday or Monday the best chance of any storms will be toward Victoria or southward.

But, even though the end is indeed in sight, until we get to that point we should remain cognizant of the situation. These systems are still capable of producing unexpected results, so make sure to stay weather aware the next couple days, heed any warnings that are issued, and never drive through flooded roads.

10 thoughts on “Another stormy day around Houston”