It’s been more than two weeks now, but can you remember back to the first part of this month? Very warm nights. Five straight days of 100-degree temperatures. Through the first 13 days of the month, an average high of 99 degrees. Then the big pattern change came, one in which tropical moisture won out over high pressure in August. 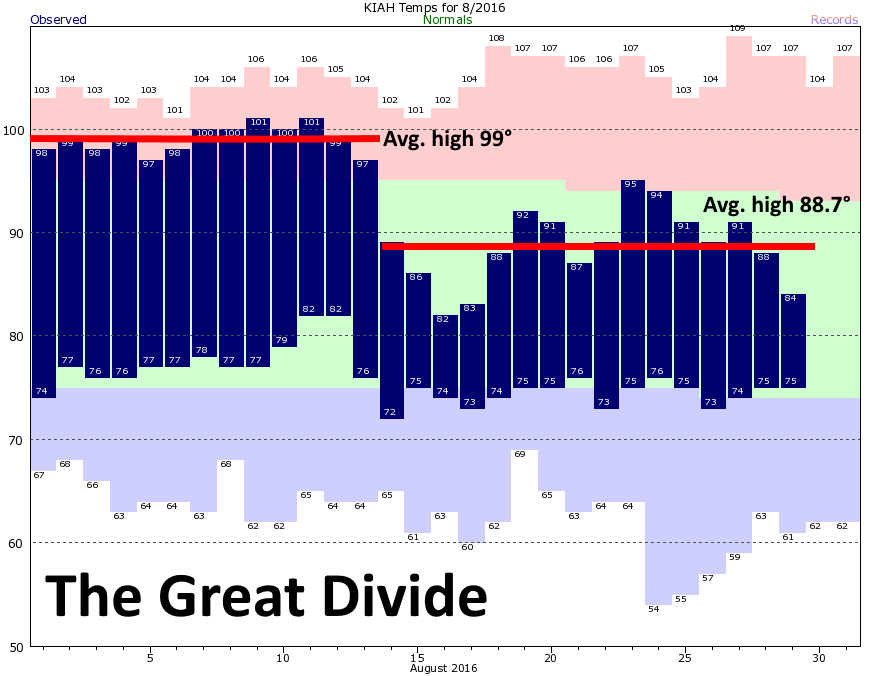 On the graphic above I’ve shown how the average temperature plummeted 10 degrees beginning on August 14th. I know some people have tired of the rain this month, but I’ll almost never tire of it in August. The clouds and precipitation have kept a lid on temperatures, especially after the blistering start to the month. And the good news is this—August is almost over. Fall will arrive some time in the next month.

But alas, fall won’t arrive this week. The upper-level low over the northwest Gulf of Mexico that’s been driving intermittent rain showers during the last few days over the Houston metro area is now moving slowly off to the southwest. In its place high pressure will move in, and that will lead to diminishing rain chances today (coastal areas near Matagorda Bay are still likely to see additional rain), and only slight chances on Wednesday and Thursday. This will allow highs to climb from likely the low 90s today, into the mid-90s by Thursday. Who is ready for highs of 96 or 97 degrees? Yeah, me either.

Sometime on Friday a weak front should move into Houston from the northeast, and this should bring some slightly better rain chances, most likely during Friday afternoon and evening. We’re talking tenths of inches, not inches, of rain, most likely.

This northeasterly flow isn’t going to cool the region down too much, but temperatures should be pleasant enough this weekend, around 90 degrees or a bit higher, with partly sunny skies. While some rain showers will be possible, I’d expect them to be fairly scattered, and over quickly. If your plans involve the beach, I wouldn’t expect the weather to disrupt them. Evenings should also be reasonably pleasant for early September.

The tropics continue to be active with Hurricane Gaston, and two tropical depressions, including one in the Gulf of Mexico. While that depression (Nine) will bring several inches of rainfall to Florida this weekend, it’s not going to have any effect of Houston’s weather. All the same, the next four weeks or so remain prime time for Texas hurricanes, so we’ll need to keep a close eye on the tropics for now.

12 thoughts on “August’s “great divide,” and a look at Labor Day weekend”