Admittedly, it was probably too good to be true to think we could get through September with completely pleasant weather. The weather pattern over most of the United States is actually going to make a pretty significant shift from where it’s been since early August. This means typical late summer weather for Texas. On to the details.

While both today and tomorrow will be on the hotter side, it will actually be rather nice still. Yes, there will still be some haze around unfortunately. But it will be mainly sunny, with fewer clouds today, and we’ll keep that up into Friday. High temps will peak in the lower 90s, with morning lows in the lower or middle 70s. Rain chances are near zero both days.

Expect similar temperatures this weekend, with highs in the lower 90s and nighttime lows more in the mid-70s perhaps. The warmer nights are courtesy of increased humidity, which will also signal our first chance of showers this month. Yesterday was our 14th straight day without rain. Given Harvey, you couldn’t script that any better, but of course it will still eventually rain again in Houston. 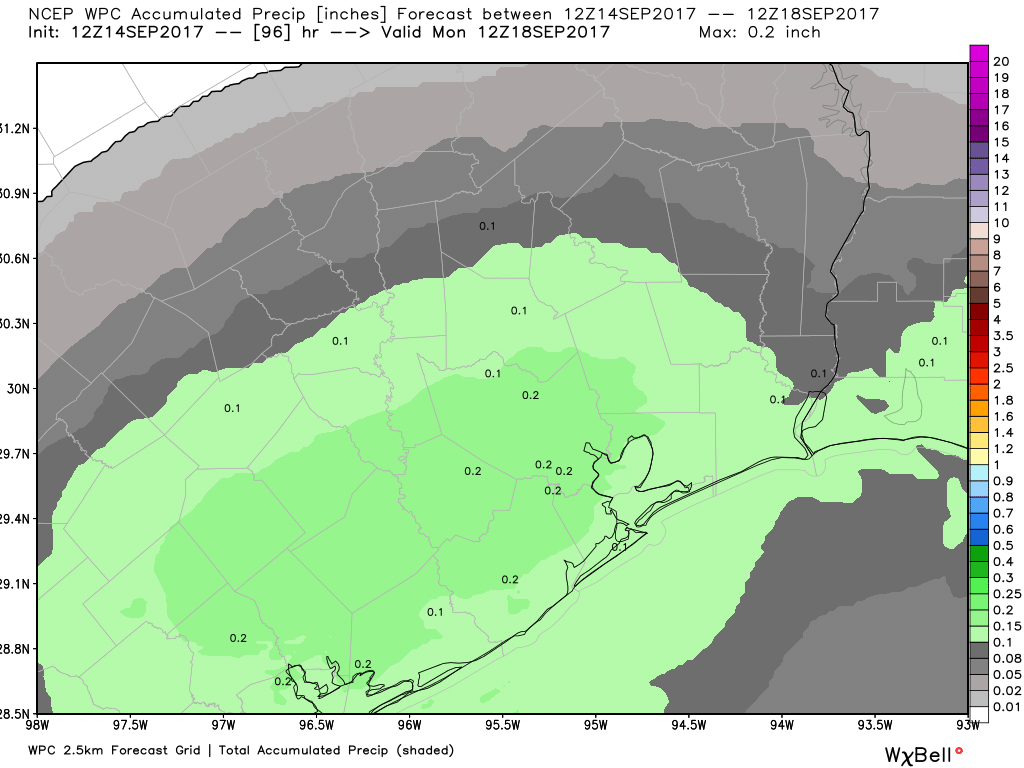 Rain totals through Monday morning should be spotty and minor. (NWS/Weather Bell)

Rain totals this weekend should be extremely modest, a tenth to a quarter inch on average. Many of us won’t see any rain at all. The better chance of the two days will be Sunday.

We should go full-stop into a late summer weather pattern next week. Daily highs should be around 90° or so, and we’ll have a chance of hit or miss, very isolated afternoon showers each day. Again, rain totals will be fairly modest, and there’s still a good chance many of you won’t see a drop. So no serious weather is expected next week.

Jose is going to be a weird one for the East Coast. While the current official National Hurricane Center forecast looks pretty straightforward, a lot of the “under the hood” stuff about Jose is interesting. 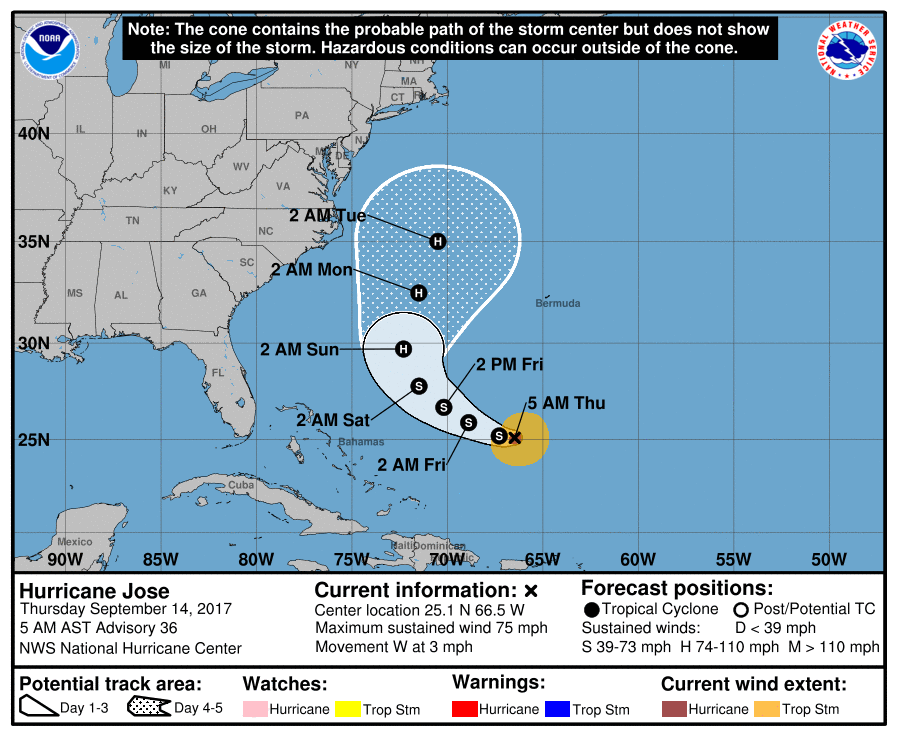 Official NHC forecast for Jose takes it up the East Coast offshore, aiming to go out to sea. (NOAA/NHC)

There is a subset of models and ensemble members that want to drift Jose further west, closer to the East Coast. It’s still a minority of solutions, but it’s become a bit larger in recent days. For that reason, I would advise folks from North Carolina through New England to continue to keep tabs on Jose’s forecast.

Going forward, I’ve seen some questions about moisture pooling in the Caribbean. Everyone’s sort of on edge post-Harvey. So let me be really clear here: I don’t think we have any serious threats to worry about. It’s getting late in the season for Texas, and weather models don’t show any systems coming this far northwest. But, with that being said, like you, I’m hyper-vigilant post-Harvey. And I do think we should keep tabs on some of these waves coming across the Atlantic as we go toward next weekend (the 23rd & 24th onward). There are signs that some disorganized system may arrive either in the Northwest Caribbean Sea or near Florida around that time. While the historical odds would favor it either staying south of Texas and working toward Mexico or going east of our area toward the eastern Gulf Coast, it’s still sensible to keep track of it. As I said, I am not particularly worried about things, but in the interest of transparency, I want you to know we’re watching it. Again: Nothing you should worry about because odds strongly favor nothing here in Texas, just continued hot temperatures. We will let you know if it becomes a concern.

12 thoughts on “Back to regularly scheduled late summer”