Tuesday’s front moved through as advertised, dropping between 0.25 and 0.5 inch of rain across the area and pushing our temperatures down dramatically. After a gray day yesterday, expect mostly clear skies well into the weekend. Yes, we’re going to have yet another amazing fall weekend in Houston.

Conditions are generally cold, cloudy, and gusty this morning with low temperatures in the 40s. That will change as the cloud deck follows the front offshore, leading to clearing skies later today for the region. Partial sunshine should allow highs to reach the mid- to upper-50s—so quite chilly for the daytime—before another cold tonight with low temperatures falling into the mid-40s. Winds will die down today, coming from the north at 5 to 10 mph. 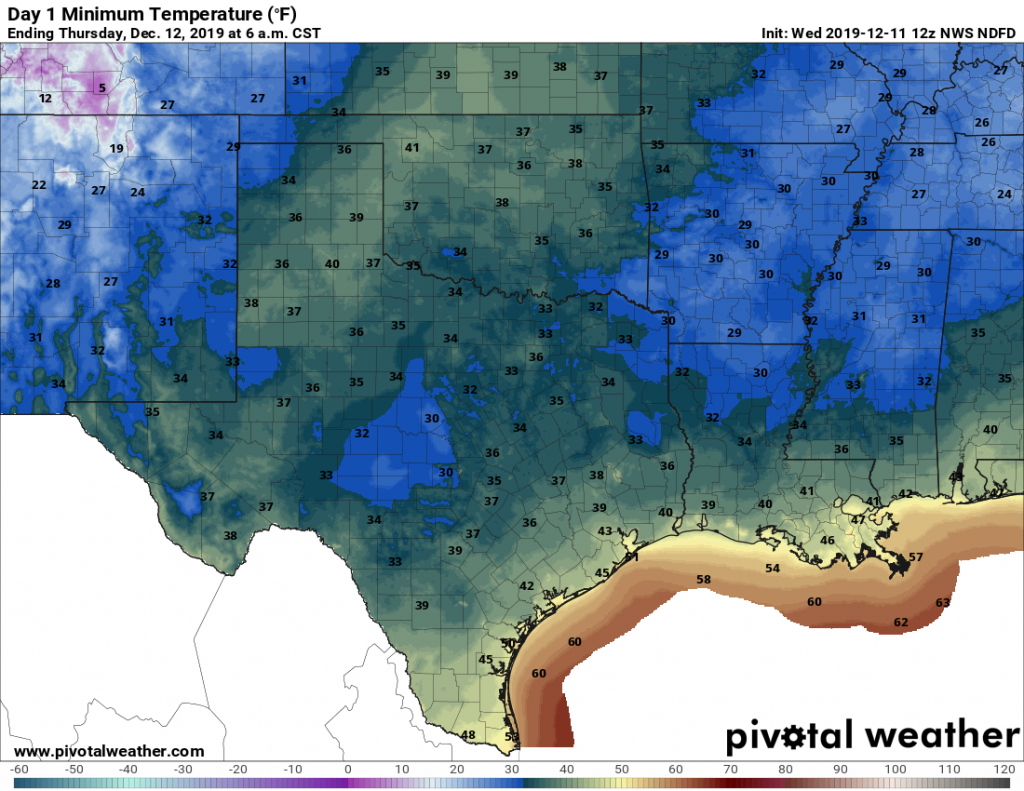 These two smashing days will be partly to mostly sunny affairs, with highs in the mid-60s to 70 degrees and overnight lows around 50 degrees. The forecast models are somewhat split as to whether a modest cool front will push through on Friday to reinforce the cooler weather, but I think the biggest question is whether this drives low temperatures on Saturday morning down to the mid-40s, or lower 50s.

The first half of the weekend looks pretty grand. We can expect mostly to completely sunny skies with a high temperature of around 70 degrees. Lows Saturday night will be in the 50s. This is going to be another one of those near-perfect late-fall days for Houston, so get outside and soak it up.

Sunday will be a might warmer, with highs probably reaching into the mid-70s, with a mix of sunshine and clouds, as the onshore flow re-establishes itself. This still will likely be a fairly nice day, however.

Houston will see a warming trend through the weekend. (Weather Bell)

Enough moisture should return on Sunday and Monday such that we see some rain with the next strong cold front. Right now the modeling guidance seems to think accumulations will be less than one-half inch, which seems reasonable —but we are talking weather five to six days hence so no guarantees.

The front appears to be fairly strong, but again details are hard to parse from this far out. It seems safe to bet on daily highs roughly in the 60s. I wouldn’t rule out a freeze for northern parts of the metro area on Tuesday night, but for the most part lows will be in the 40s. Probably.

2 thoughts on “Clearing and cool for most of the week, with another stunning weekend”