Today will be one of the Houston days I like to call “Winter-Lite.” It’s definitely chilly by Texas standards, but it’s really not going to be frigid. We’ll have some ups and downs in the days ahead. We’re also watching Texas slip deeper into drought. More on that at the bottom of the post.

Our cold front slipped through the area overnight. Rain chances should be minimal to near zero today. Basically, today looks mainly cloudy, breezy, and chilly with temperatures stuck in the lower or middle 50s.

If you have outdoor plans this weekend and can choose Sunday over Saturday, that’s the right play. Tonight will start quiet with just some clouds. The Gulf will see a trough and warm front develop and begin to push back toward us. As it does so, a couple of disturbances several thousand feet up will approach from the west. The combination of these features will likely lead to showers developing overnight.

Unfortunately, I think this means Saturday will be damp. Look for showers, periods of rain, or even a thunderstorm to persist through Saturday morning and into the afternoon. How much rain? I’m thinking around a quarter inch in most spots, maybe a little less south and west or more north and east. 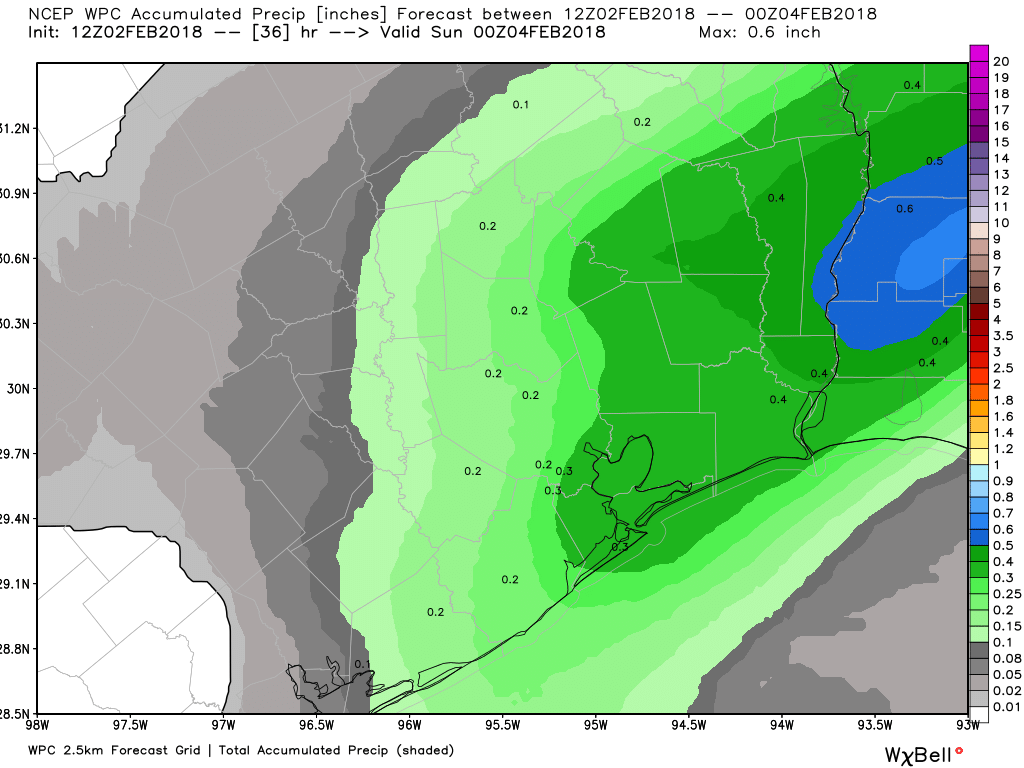 Total rainfall through Saturday evening should be around a quarter inch, with higher amounts possible, mainly east of US-59. (WPC/Weather Bell)

Last weekend sort of snuck up on us, and while model guidance has trended slightly rainier this weekend, I don’t think we’ll see nearly as much rain as we did last Saturday. So we’ll call Saturday a damp one, but not as wet as last weekend.

Temperatures should warm through the 50s during the day, perhaps getting into the 60s by later in the afternoon tomorrow. Look for fog (especially at the coast) on Saturday night into Sunday morning. I’m skeptical of rain chances Sunday. Rather, I suspect we’ll see clouds and/or fog in the morning gradually yield to sunshine, with temperatures warming into the 70s. A weak cold front on Sunday will allow temps to drop back into the 50s heading into Monday morning. More fog is possible at the coast Sunday night.

Clouds and onshore flow slowly increase again Monday, bringing a chance of showers back to the area. More showers on Tuesday ahead of our next disturbance, which should plow another cold front through here on Wednesday. The air mass behind next week’s front looks a little stronger, so I suspect we’ll see some 40s or even 30s in the region by the time we get to Thursday morning. More on that Monday.

Over 56% of Texas is classified as in some form of drought per yesterday’s U.S. Drought Monitor update. 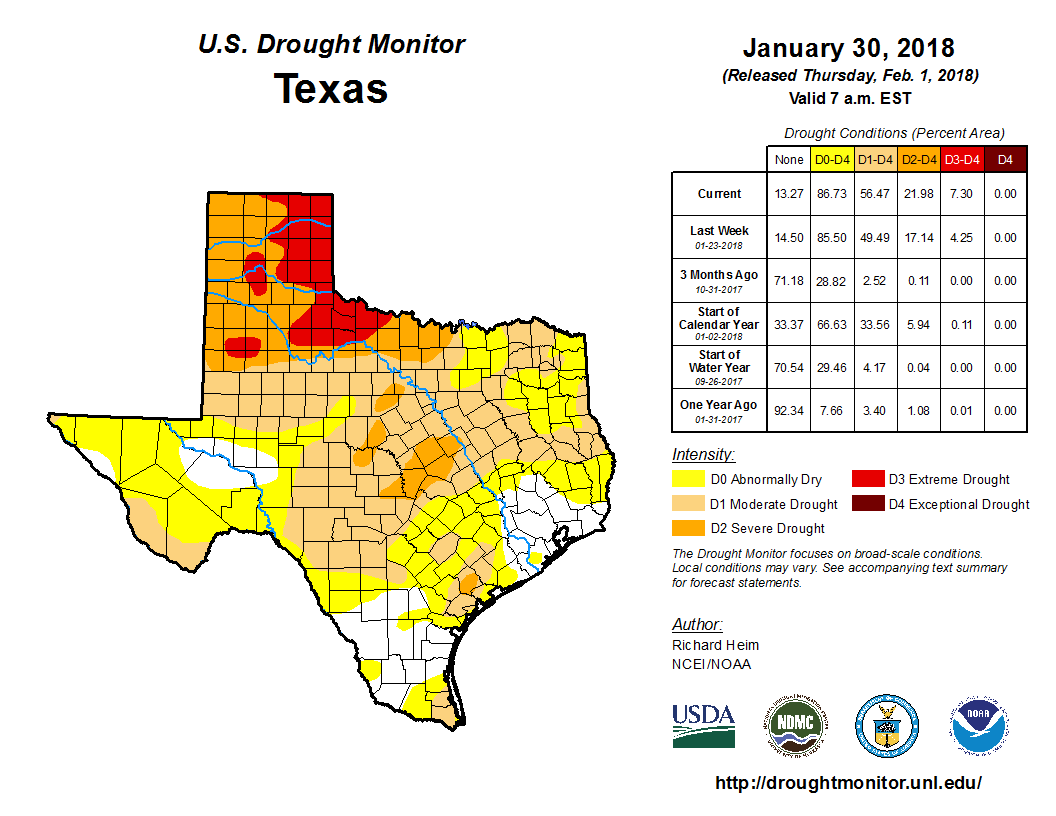 Drought isn’t too bad around Houston, but it’s expanding steadily elsewhere in the state of Texas. (U.S. Drought Monitor)

The Panhandle is being particularly hard hit. The last measurable rainfall in Amarillo occurred the day the Astros took a 1-0 lead over the Yankees in the ALCS, back on October 13th. Needless to say, this is getting serious now across Texas. Much of north and west Texas has a burn ban in effect. We’ve been fortunate so far in Houston to at least have some occasional rains, and in fact, this map has improved a bit in our area. But interior Texas is likely to see the drought get worse before it gets better. This will be a story to watch as we head into spring.